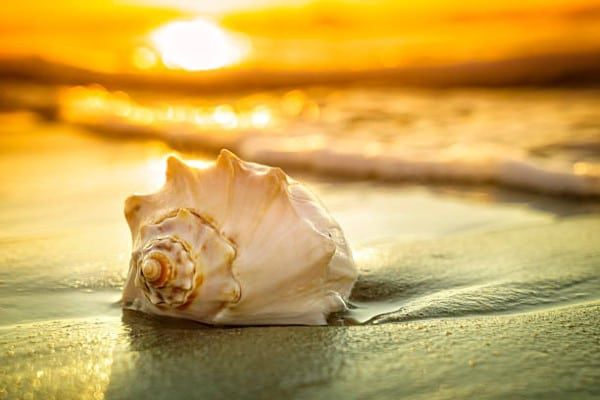 A Gift For The Divine

What kind of offering does the Divine cherish the most? Exotic gifts, priceless gems or something else? Let's discover with Vasu.

A Gift For The Divine

Vasu woke up to the new dawn and soon left with his grandfather for work. His grandfather whom he fondly called Azoh was a master craftsman whose old but deft fingers worked magic with sea shells –the treasures of the sea.

The wet sand of the beach tickled his tiny feet as he picked up shells or ‘sheepis’ from the sea shore.

“Be careful not to trample the ‘sheepis’ ….pick up the white shiny ones…” grandfather instructed Vasu as he chose the best of the shells and carefully placed them into a coir basket .

“ Azoh, Why do we come here looking for shells everyday? Why don’t we go into the sea and gather them all at once?” Vasu asked curiously.

Vasu stared hard at Azoo’s face wondering how much more wisdom was hidden behind those wrinkles!

Soon the basket was brimming with shells of all shapes and sizes, milky white pearls and ones with hues of purple and grey.

Satisfied with their bounty, Azoo and Vasu walked back to their workshop under the huge Banyan tree .

They soaked the shells in a bucket of water and rock salt so that the shells would get some shine and cleaned them thoroughly.

Then they dried the shells on a clean cloth and set down to the task that Vasu enjoyed most..sorting out the shells. Soon the shells were neatly arranged into separate heaps according to their colour and size.

Azoo took out  a string, a handmade drill ( a pointed nail pegged into a piece of wood) a hammer and a ball of dough from his tool pouch. He rolled the dough into a flat platform and placed the shells on it….a very clever technique he had developed himself.  With deft strokes he drove the nail into the shells and drilled tiny holes into the ‘sheepis’. Like always Vasu looked on in admiration at Azoo as he went about the difficult task. Apply a little more force than needed and the shells would shatter into tiny bits.

Soon Azoo created beautiful art out of the raw ‘sheepis’- earrings, bracelets ,key chains, incense stand, and even a peacock !!! He carefully placed the items into his beautiful selling basket that was decorated with what else?? Shimmering Shells .

“ Hey Azoh! You have forgotten this beautiful piece! ” Vasu drew Azoh’s attention towards a pretty necklace lying on one side. Azoh had made it from the best of the shells and  painstakingly painted it with the natural dyes he made from plants and berries.

“ It will fetch a lot of money na?” Vasu said excitedly.

“ It is not for sale Vasu. It is a special gift……for the Goddess of the sea.’’ Azoh’s eyes twinkled mischievously.

Vasu looked at him in surprise..

“ Today is a full moon night and the Sea Goddess shall pay a visit to our land……..’ Azoh smiled mysteriously, puzzling Vasu even more.

And then he lovingly placed the necklace at the feet of the statue of the Sea Goddess near the Banyan tree and went off to sell his wares. 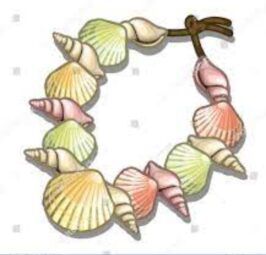 And then it was time for the moon to come put and play.“ Zzzzzzz….’’ The whole world was fast asleep.Vasu quietly sneaked out from the house into the cold night and hid behind some tall bushes growing near the Banyan tree .The moon round like Ajji’s chapattis  bathed the earth in its soft shimmer while Vasu lay in wait of the Sea Goddess. But after a while his excitement turned into gaping yawns and he struggled to keep his eyes open. Sleep finally conquered him.

He woke up suddenly to some soft music, ( definitely not from this world)  drifting into the silent night . He rubbed his groggy eyes and stared in disbelief as the saw the conch shell near the statue of the Sea Goddess begin to rattle and shake violently.

His eyes all but popped out when he saw a strange being crawl out from the conch shell. The man was barely a foot tall and his whole body was covered in moss and creepers. His long hair were matted with shells and corals and he was playing a flute from which came a haunting melody.

The conch shell wobbled again and out tumbled a bunch of bouncing furry balls that shone like disco lights. The balls bounced up and down in rhythm adding to the music. They even had faces and tiny hands that rose up each time they went up !!

Next came mysterious blue creatures with  heads of  snail and arms of an octopus which they waved around in an enchanting dance.

They were followed by pretty mermaids who had fish like lower bodies .They wore beautiful coral wreaths on their heads and glowing flowers around their wrists.

One by one many other strange beings none over a foot tall, poured out of the magical conch shell and arranged themselves into neat rows.

The Conch shell shook for one last time and a soft green fog trickled out. The fog thickened each passing second and soon enveloped the whole area.

And then as suddenly as it had appeared, the fog cleared and in  place of the statue of the sea goddess stood a being so divine, so beautiful that it was impossible to describe her in words.

She wore a flowing blue and green garment with waves rippling all across. There were fish and corals, squids and sea urchins, crabs and lobsters swimming through the length and breadth of the garment among weeds and moss. A dazzling white crown made of pearls adorned her head and she wore a glittering necklace made of rubies and precious gems.

The gathering bowed their heads in reverence before the Goddess . She clapped her hands and from thin air a lavish feast spread out before the magical sea beings. They ate to their hearts content and the Goddess clapped again.And Woosh the food vanished!!!

The green man began playing the flute once again and everyone broke into an enchanting dance of merriment.

The Goddess clapped her hands again and everyone became very still.

One by one the beings offered the precious gifts they had specially brought for the Devi by placing them at her feet . The magical beings waited with baited breath to see who would be the lucky being whose gift would be chosen by the Goddess herself. The Goddess lovingly inspected the precious gifts spread out before her- there were exotic flowers brought by the mermaids that glowed in the dark, bracelets made from glistening pearls, rare stones and even the magical flute. But the Goddess chose a simple necklace made from ordinary shells and wore it around her neck like a garland.

Azoh’s necklace!!!! Vasu  recognized the shell necklace the moment he saw it.

The Sea creatures cheered happily as the Sea Goddess proudly displayed the chosen necklace. She waved her hands  and a thick green fog once again drifted in…..Vasu strained his eyes but it was impossible  to see through the magical mist.

When the mist finally cleared the Divine Goddess and the magical beings had disappeared!!! All that was left was the statue and the ordinary conch shell.

The next morning Vasu was the first to wake up. He ran out hoping to find some clue about the mystical beings that he had seen the night before but everything was as ordinary and as normal as it had always been.

“ Azoh, I had a strange dream last night…” Vasu turned to Azoo but stopped and followed Azoh’s gaze. He was staring at the feet of the statue under the Banyan tree and smiling contentedly. The shell necklace was gone!!!

Toilet…every day crisis
How To Motivate Yourself