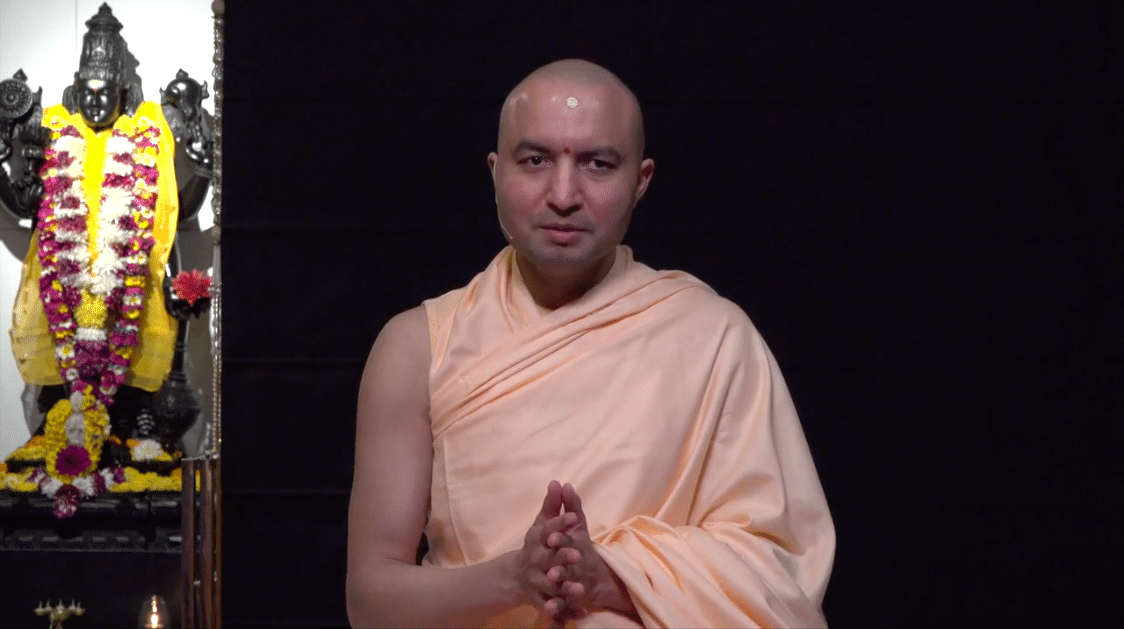 My second principle is, either I won’t eat food, or if I am eating food, then no matter how much in a hurry I am, I will eat it with a peaceful mind. I don’t like eating fast. Because it is neither beneficial for your body, nor for your soul.

34:25 – 42:10 : One type of eating is of a Cow, you must have seen it. And, one type of eating is of a Dog, you must have seen that also. How vast the difference is! And also, in the behaviour of both, there is a huge difference! How calm a cow is. And how restless a dog is! A dog is so innocent that if someone calls him, he will come to him, wagging his tail. Just like, a person who has forgotten his/her consciousness, and is caught up in Mayajaal (Illusion), as soon as he/she sees some material attraction in society, they go there by wagging their tail. In their lives, only two states remain : Either wag their tail and chase material enjoyments, or, hide their tail and run away from responsibilities. He/She forgets how to live with Determination. They forget forever, how to live, being a Sthitpragya.

And, if you take food in such sentiments, then no matter how many lakhs of chanting you are doing, You will not attain Siddhis. In the starting, I had said that with great Sadhana, it is somewhat possible, but it will be a fruit without a seed. The arrow may hit the target once or twice, but after that, it would be of no use, the person would sit empty-handed.

And, if you will think about it, then you will find that इनमे से कुछ भी कठिन नहीं है। केवल एक अभ्यास की बात है। (None of this is difficult. It’s only a matter of practice).

So, am I saying that everyone should take their tongues out, and keep it somewhere, and eat tasteless food? No! In fact, Your food’s taste would be enhanced, if you eat it with mindfulness. Because, the human mind is so powerful, so divine, that whatever it is which you consider important in your life, it will become important for you! And this is a matter of happiness, as well as sadness. And, whatever you have accepted to be important for you, your attention will keep on going in that direction. Then, a person doesn’t see any other thing. Whether it is his/her goal, if that is important to them, then they would forget eating, drinking, sleeping etc, and continuously keep on thinking in that direction.

तो ज़िन्दगी में, आपने किस चीज़ को महत्त्वपूर्ण माना हुआ है, उसपर गौर ज़रूर करना। (Whatever it is, which you have accepted as “Important” in your life, think over it and have a look at it).

I am reminded of a story. Once, Raghu Swamiji’s thumb was injured. This story was told to me by Raghu Swamiji in the woods. Swamiji, was it due to a rock? Was it your finger? Okay, it was his finger. I said thumb because it looked like a thumb! (Laughter). It was crushed, and blood was oozing out of it. This was one of Swamiji’s old stories. Swamiji has a lot of stories to share, you know. The glass became full of blood. So, he ran towards his house. And there, Swamiji said, “I have to go the hospital”. Swamiji’s elder brother said, “First, I will apply powder on myself, and get well dressed, as I don’t go out just like this”! So, Swamiji left everyone, and ran towards the Hospital. There, he got his treatment done. When the treatment was done, then his brother also arrived.

Now, for his brother, it was more important for him to get well-dressed, and then move out. For Swamiji, saving his finger was more important. Your Treasure is wherever your Heart is, and your Heart is, wherever your Treasure is. Wherever a person thinks that his/her important thing is hiding, then automatically, their heart, attention, karma, speech, move in that direction only.

So, if you are giving food so much importance in your life, then you will not think of anything else, and 3-4 hours would get wasted daily. Just like, Buddha used to say, “Food should be taken up as medicine”. Just like, a person takes medicines to keep him/her healthy, similarly, they should eat food to keep their body healthy.

Now, if you want to be saved from such a situation, even after eating junk food, then “Eat very slowly”. Now, I am not encouraging you to eat junk food, but suppose it happens, and if you are not able to control your mind, then Chew slowly and eat.

मैं शब्दों में बयान नहीं कर सकता कि उस चीज़ की कितनी भारी महत्वता है कि आप भोजन को धीरे धीरे, एक एक कौर को स्मृतिपूर्वक खाते हो, तो भोजन जो है, भीतर जाकर अलग ही प्रभाव देता है! (I cannot put it in words, how much important it is that you eat food slowly, and eat every bite mindfully, as such a food, when it goes inside, will have a completely different influence!). Just like I mentioned it in my book : The Wellness Sense, that there are a lot of factors influencing your health, apart from the food which you are eating.

So finally, in today’s talk, I want to say only this : यदि आप सिद्धि के पथ पर बहुत तीव्रता से आगे बढ़ना चाहते हैं, तो हर कर्म को साधना में बदलना होता है। हर कर्म को साधना में कैसे बदला जाता है, इसके तीन स्तम्भ, तीन पड़ाव मैंने आपको बता दिए हैं। (If you want to move very fast on the path of Siddhis, then you will have to turn every Karma you perform, into a Sadhana (Spiritual Practice). And for converting every Karma into Sadhana, I have told you three pillars). The next and final pillar, I will tell you next week.

Thus ends the third discourse of Swamiji, on the Attainment of Siddhis.

These were not covered in Swamiji’s discourse, so you may skip this section.

In Bhagavad Gita, Shri Krishna talks about the three kinds of food, which Swamiji has also explained in this discourse.

Persons in the mode of goodness prefer foods that promote the life span, and increase virtue, strength, health, happiness, and satisfaction. Such foods are juicy, succulent, nourishing, and naturally tasteful.

Foods that are too bitter, too sour, salty, very hot, pungent, dry, and chiliful, are dear to persons in the mode of passion. Such foods produce pain, grief, and disease.

Foods that are overcooked, stale, putrid, polluted, and impure are dear to persons in the mode of ignorance.