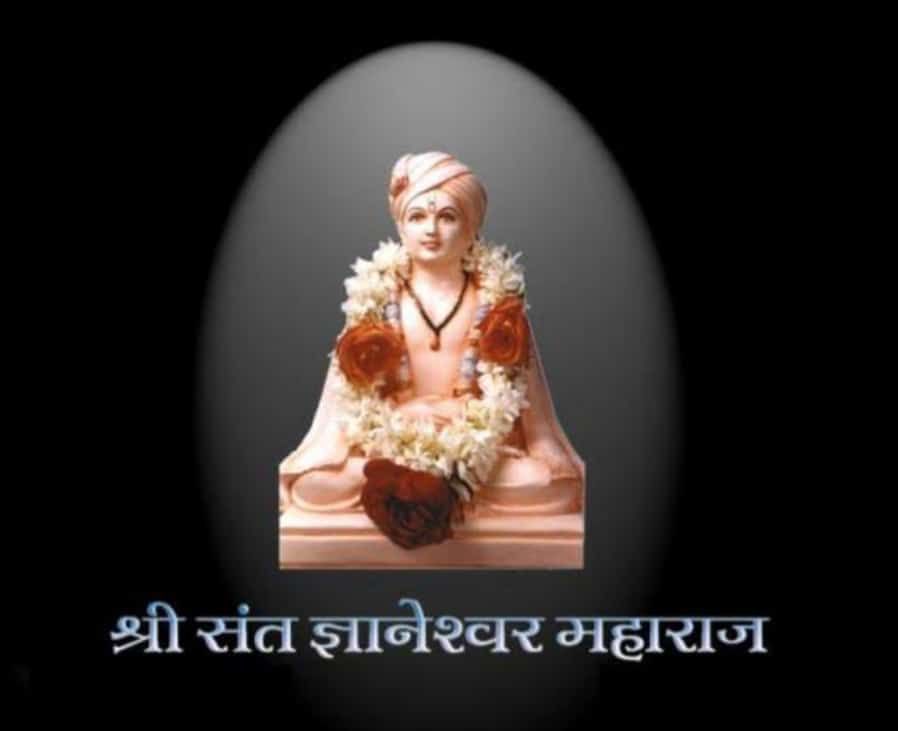 Oh Seeker, stop by at Bhagwan’s door for just a moment and you will get all 4 kinds of liberations – Salokya, Samipya, Sarupya, and Sayujya !!

Oh Seeker, Chant Hari Chant Hari all the time
Don’t worry about counting how much Punya gets accumulated .

Oh Seeker, while carrying out household duties chant Lord’s name with enthusiasm. All Vedas and Shastras will bless you with
open arms .

Dnyanadeva says I give you Praman (Proof) of Bhagwan Veda Vyasa (who wrote Mahabharat) that Dwarkadhish Sri Krishna will look after you just like He served at Pandava’s home.

These beautiful lines written by saint Dnyaneshwar Ji in Haripath .

Twenty-eight of his abhangs were written as a collection called Haripath (meaning “Sing Hari, Study Hari God”). He extols devotion as the most essential quality in spiritual life,
and perhaps, most importantly, he sings to us about the importance and the impact of the company of the saints. In every verse, like a loving mother, he encourages us to take up the repetition of God’s name and hold God close to us. He says, As one repeats the name of God, millions of sins drop away. Hold onto the thought of Rama Krishna. Extricate all your negative tendencies, cut off all attachments. Don’t hide behind the senses. Have faith in the holy places and rituals and always cultivate tenderness, peace, and compassion. In this way, you will make Hari your guest .

Dnyaneshwar was born at Apegaon in the thirteenth century, at midnight Shravan Krishna Ashtami . His father’s name was Vitthalpant Kulkarni. His mother was Rukminibai. Govindpant and Mirabai were his grandparents.

Dnyaneshwar’s father vitthalpant was originally an ascetic. He retired while married and moved to Kashi. When the guru realized that vitthalpant is married, his guru sent him back. After re-entering in grihasthashram on his guru’s order, vitthalpant had four children. His names were Nivruti, Dnyandev, Sopan and Muktabai.

Vitthalpant made a pilgrimage and settled in Alandi village. At that time, all the society used to treat these four siblings as children of Sannyasi. The villager left them and their families in the solitude. As an abandoned Brahmin, he had to endure a long time. The Brahmins of Alandi refused to accept Dnyaneshwar and his siblings. Vitthalpant asked the theologians what was the solution. The Brahmins said that there was only death penalty on it.Vitthalpantani and Rukminibai committed suicide so that the children would not be deprived of rites and their future would be better.

After the death of his parents, Dnyaneshwar and his siblings were harassed by the people. They were denied basic necessities like food and water. Later these brothers went to Paithan village and there Dnyaneshwar proved his erudition.

In Alandi there was a Brahmin named Visoba Chati. He was very orthodox and used to ridicule the sadhus and sages. Once Nivrittinath expressed his desire to Muktabai to eat “Mande” which are required to be baked on a frying pan. So Muktabai went round the village for buying a pan, Vosoba, who was wicked, had informed all the potters in the village not to give the pan to Muktabai and hence she could not get it in the whole village. She came home empty-handed and was sobbing, because she thought that Nivrittinath, her eldest brother, would get annoyed at this. When Dnyaneshwar knew about this he consoled Muktabai and by the power of Yoga, he kindled the fire inside his stomach and told Muktabai to bake the “Mande” on his back which was as red hot as the frying pan. visoba chati saw this incident and he surrendered himself to Dnyaneshwar .

One Yogi, Changdeo by name, was said to be fourteen hundred years old. By his Yogic power he had subdued all fierce beings like the tiger and the serpent. After knowing the power of Dnyaneshwar he started for a visit to him. He rode on a tiger and was using a serpent as a whip. At that time Dnyaneshwar and his brethren were sitting on a compound wall outside their house. When they were told that Changdeo was coming to them on tiger backs they made the wall itself to move and thus went forward to receive Changdeo. When Changdeo found that Dnyaneshwar was having control over inanimate objects as against his control on living beings, he was completely subdued and knew his folly in underestimating the power of Dnyaneshwar. He at once fell at the feet of Dnyaneshwar and became his disciple.

Nivruttinath was the guru of Dnyaneshwar. With the blessings of his guru in the Nevasa area, he wrote a famous critique of the song. In fact, Dnyaneshwar made this remark and Sachchidananda Baba wrote it. This book is called ‘Dnyaneshwari’ or ‘Bhavarthadipika’.

The Dyaneshwari is the commentary on Bhagavad Gita written by Shri Sant Dyaneshwar during the 13th century at age 16. The Dyaneshwari provides the philosophical basis for the Bhagawata Dharma, a Bhakti sect which had a lasting effect on the history of Maharashtra. It brings Vedanta and other spiritual philosophies to common man. It explains the various
paths a person can take for spiritual progress and ultimate liberation.The content of Dnyaneshwari reflects a detailed knowledge of kundalini, metaphysics and astrology .

His second book is Anubhavamrit or Amritanubhav. It is a book of pure philosophy, of Jiva-Brahman unity. There are about 800 poems (ten chapters) in this book. This is a great book in terms of philosophy .

Through the book ‘Changdev Pasashti’, he made Changdev proud and preached to him. Changdev is said to have lived for 1400 years. But his ego was not gone. For this, the letter of 65 poems written by Saint Dnyaneshwar is Changdev Pasashti. It has an amazing philosophy of Advaita Siddhanta .

Saint Dnyaneshwar ji attained Sanjeevan Samadhi on the holy bank of Indrayani River at Alandi at the tender age of 21 years.
Alandi is of great importance for Warkari devotees as well as for all Marathi people.

P. S . I have written this post with the help of information I get from books and social media .