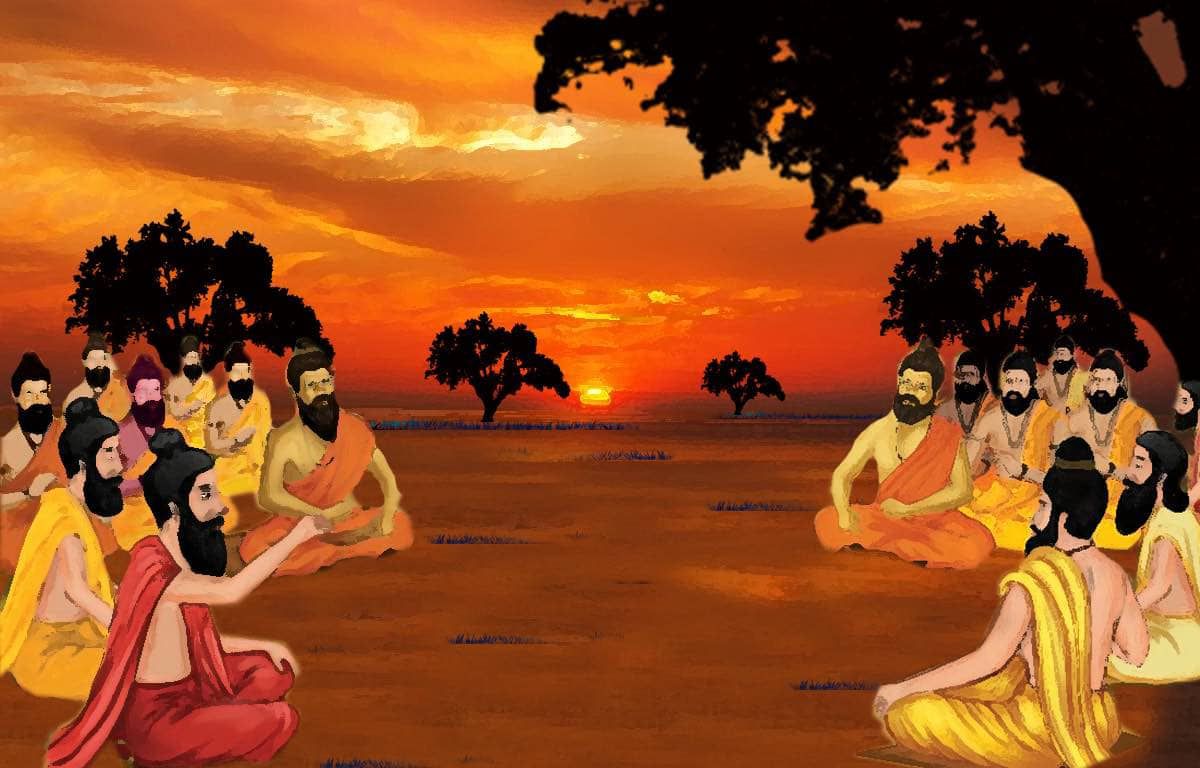 My satsang stories and takeaways

I remember hopping along excitedly holding my grandmother’s finger, rushing to the nearby park , where every summer some or the other saint was invited for a “Satsang”  for 14-21 days.

My dadi ji was an avid vaishanava married to a strict  follower of  the arya samaj ( my dada ji- who scoffed at such things ) and the satsang gave her an opportunity to enjoy the flavour of her roots . Of course, she also went unfailingly to the arya samaj mandir each morning for havan—where too a drowsy me followed her since she had Alzheimer’s disease (suffered from extensive memory loss)and wasn’t trusted by the family to find her way home safely .

For me, going to the evening satsang meant, listening to enchanting stories and anecdotes and getting a yummy halwa prasad at the end. So , I was always ready to go there and infact used to practically drag my dadi ji. As my dadi ji passed away and the generous patrons who were funding the above mentioned satsangs too merged into the divine, the katha satsangs stopped. Whether it was the havans in the morning or the kathavachan in the evening, you could always find the ‘dyed hair’ aunties and the white haired aunties  whispering their comments, cribs about their daughter-in -laws and grandkids. Some even considered it a social outing and came in their finest jewelry and attire and were often found staring at others, comparing themselves with the competition possibly !

I found satsangs again as a resting place for my soul, when I learnt the shambhavi mahamudra at Isha foundation and on the first Saturday of every month the satsanga meant doing the kriya, meditating and chanting together . There was practically no chatter during or before the satsang and thereafter too, very limited talk. The silence made the feeling of peace soak into your very being. I never made any friends there or became a part of the ubiquitous whatsapp groups that inevitably get created post such satsangs. But thankfully the term FOMO hadn’t entered my dictionary until then !

In 2019, I was posted in Mumbai away from home and family. A friend took me to the satsanga of her Guru – an enlightened soul who focused on juice therapy and healing to relieve people of their pain and illness. The satsang was structured on chanting the guru paduka stotram ( one of the most beautiful stotras penned by Adi Shankaracharya) , meditating for 30 minutes followed by discourse from guruji  and then Q&A / experience sharing from the disciples/ devotees. I learnt that a good structured program ensured keeping gossip at a minimum and keeping the people focussed but not bored.

Again several WhatsApp and Facebook groups spouted like weeds—bringing together followers, discussing matters not purely spiritual but worldly affairs and the rich knowledge flowing from not just the Guru but  also the renowned WhatsApp  university( where possibly everyone is a Guru )

Finally ,  I had the the unparalleled experience of a virtual on satsang on os.me, through Swami ji’s posts which are a divine fountain of truth and kindness, his zoom meetings which quench the thirst of so may  parched souls  and super engaging videos .

What I have learnt from being an active and passive participant in various satsangas is :

Satsangas are definitely not social outings as some may treat them. They are not parties. These days there is also a trend of calling kirtan mandalis to conduct these satsangs. What I often find here is that, while  the singer is singing beautiful bhajans, the audience is busy chattering away to glory  while gulping  away at the snacks .

By definition, satsang is supposed to mean being in divine company . Its supposed to fill your heart with joy, devotion, a feeling of belonging, and a deep and abiding sense of peace. Chanting together for instance, I figured, just charges the environment with so much energy .

Chattering away or gossiping at such divine satsangas is wasting a golden opportunity to submerge your spirit in divinity and peace . What we carry back from the satsang should be a sense of peace, reflections , and some amazing lessons perhaps, rather than hundreds of unread messages on whatsapp / Instagram.

There is a story of  Mulla Hathi Baba’s parrot. Hathi  and his wife attended satsanga, religiously every evening . They had a pet parrot Mithoo who got very curious and asked Mulla where they disappear  to every evening . Mulla bragged – “We go to the divine satsang of a most accomplished and all- knowing  saint . But how would you understand that ?”

The parrot however refused to backdown . He asked Mulla – “Please on my behalf, tomorrow—ask the question —when I will get my freedom? The saint’s answer will bring peace to my troubled soul.” Mulla as a  part of  his RAK-  obliged and the next day post the satsang ,walked upto the saint and  enquired, “Maharaj, my pet parrot was wondering when he will get his freedom ?” The saint fainted  on hearing the question . Back at home Mithoo couldn’t wait to hear the answer to his query but Mulla was in a foul mood and scolded him badly, telling him,”You have real bad luck. The saint fainted on hearing your question. Clearly , you won’t ever get your freedom!!”

The next morning Mithoo pretended to be dead and when Mulla opened the cage to check, he grabbed the opportunity and flew away to freedom. That evening the saint quizzed Mulla,”What happened to your parrot who was asking the question?” Mulla  with a long face, confessed the parrot had flown away  The saint laughed heartily,” You are still caught up in this worldly prison despite so many satsangas and your parrot took a mere hint and got his freedom! You come to the satsang, listen to wisdom and knowledge, and yet what registers with you is only what you want to hear. You remain focussed on your selfish desires and worldly connections but not on the truth. Absorb the truth and it shall set you free.”

As Adi Shankarcharya said in his immortal Bhaj Govindam

From good company or Satsang comes non attachment, that is a certain amount of dispassion for all things worldly. From non-attachment arises freedom from delusion. A person becomes dispassionate when he is free from moha. When there is freedom from delusion, his mind becomes still and from this state he can easily gain liberation. Such is the greatness of satsang.