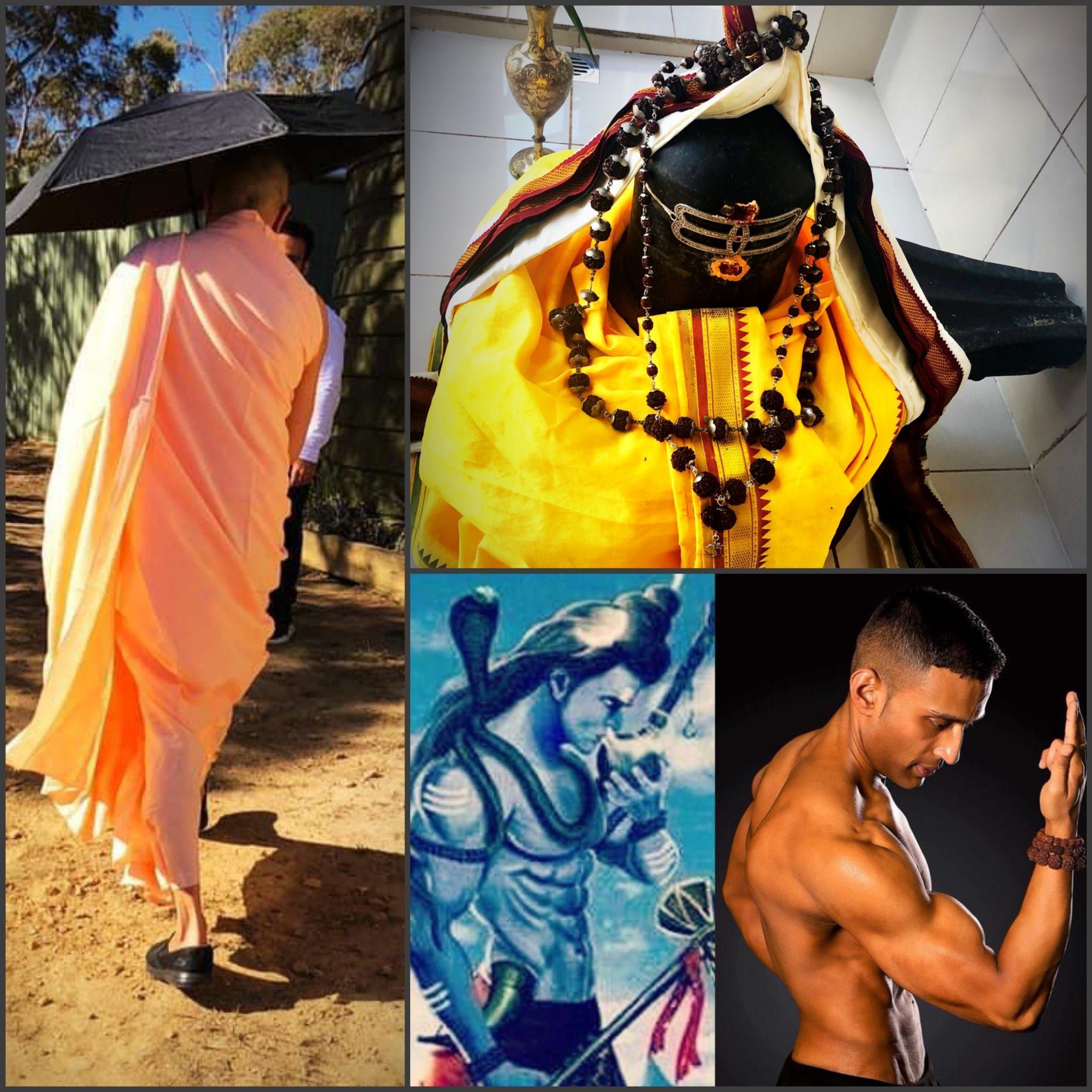 "The journey of a kid mesmerized by Shiva to finding his Guru".

Shiva – ‘The Ultimate Yogi & Warrior’; ‘The Lord of all Gods’; ‘The Giver of all Boons’ etc, is known by numerous names & legendary folklore’s since time immemorial.

Legend has it that Sage Parashurama (Teacher of Kalarippayattu aka mother of all martial arts) was the foremost student of Lord Shiva & armed with the knowledge of all weapons, warfare and esoteric powers, even the Gods feared to battle Parashurama, who later became the teacher to great warriors like Bhishma, Dhrona (teacher of Arjuna), Karna etc in the great Sanskrit epic ‘The Mahabharata’.

My first intimate encounter with Shiva, was when I was 7-8 years of age, when I first lay my eyes on the magnanimous statue of Lord Shiva at a Yoga center in my town of Baroda & behold!!! I was immediately fascinated, mesmerised and inspired by Shiva’s calmness, simplicity & paramount physique.

Being born and bought up in a Catholic faith family, I vividly remember asking my mother “Mummy why doesn’t Jesus have a physique like Shiva. Jesus is so skinny. He didn’t even have any weapons to fight back when captured. I want to be like Shiva and not Jesus” (I chuckle at the innocence of that little kid today). However I will leave my Mum’s reaction to your imagination?!

Well, I may not remember the whack on my head or the mouthful from my Mum, but I do remember that evening, was the sprouting seed of my ultimate love affair of unconditional devotion, inspiration & fidelity towards Shiva.

Knowing Shiva mythologically in my early teens, came through watching epic tele serials like ‘Mahabharata’, ‘Vishnupuran’, ‘Om Namah Shivaya’ etc on Door-Darshan TV channel back in the 90’s. Thanks to one of my friends’ father who had recorded all of the telecast serials on their VHS tapes that gave us repeat access and entertainment throughout the scorching summer holiday afternoons each year. (Kid’s of the 90’s will know what I am talking about. Ours was the best generation ever, isn’t it?)

After being inspired with the ‘Tapasya’ (Penance) of all the mythological characters who pleased Lord Shiva & received boons in return, I too use to religiously escape at nights pre or post dinner, sitting on top of the highest point of our tall building terrace which was quite dangerous to access without any supportive or protective barriers; one slip & meeting the Almighty was guaranteed. 😛

Somehow all these dangers never seemed to hinder my dare-devil & enthusiastic zest to meet Shiva. And at that dangerous peak, I sat overlooking the whole town in silence, meditating and chanting ‘Om Namah Shivaya’. The loud chimes of our neighboring temple bells and chorus chanting in the background use to give me goose bumps while I did my ‘Tapasya’ in the dark star studded sky with only the silvery moonlight shining on my body and surrounds. Sometimes I used to just sit there looking into the sky, expecting to see a massive flash of light tear open the cosmos and Shiva appearing in front of me.

This all happened without the knowledge of anyone of course & occasionally my younger brother would catch me meditating and yell out to me, disturbing my ‘Tapasya’. And as you can imagine, I literally enacted like the violet sage ‘Parashurama’ about to curse or beat him, and before I could do so, he would run to my parents to wait and watch if I did anything to him or else he could complain to them and that would be the end of my ‘Tapasya’. 😛 (Things younger siblings do to annoy and blackmail elder siblings)

Later on in high school, little did I know that I would be selected to play the mute role of Lord Shiva, standing in Vrikshasana (Tree Pose) during the whole 7-8 minutes of classical Bharatanatyam dance being performed by all the good looking girls of my school.

They had to worship Lord Shiva (aka Me) throughout the dance & all my classmates use to tease and/or be jealous of me in scoring the role, which came about through a very tough audition of all boys failing to stand even for 1 minute in this austere, rigorous & difficult pose. I somehow managed to succeed with ease probably because of my intensive sports background and secret devotion to the warrior of all warriors ‘Shiva’, for enacting him would be the ultimate dream come true was the only thought in my mind at the time of the audition.

Many teachers & friends commented, “Willbur, you are so lucky to be playing Lord Shiva’s role’ ; ‘You resemble like a tapasvi (an ascetic), with your eyes closed, fully focused on stage’ ; ‘Don’t the girls giggling distract you?’ etc etc.

At the time, none of that mattered, playing the role of Shiva was the highest high and seemed like a blessing from Shiva Himself. This was indeed one of the most memorable moments of utter devotion, focus & love towards Shiva.

In University too, when I received my ‘Wings of Freedom – Splendor Motorbike’, I used to bunk University and often drive to ‘Pavagadh’ – One of the prominent ‘Shakti Peeths’ in Gujarat. Maa Shakti being the consort of Shiva, was my bribing companion in seeking Shiva, somewhat similar to a child requesting his/her Mother to speak with Dad when they want to get anything done.

This may sound outright funny, spooky or weird, but when I used to train at the Yogniketan gym (a modern ‘akhada’) in Baroda, I mentally used to believe that Parashurama was my bodybuilding coach who is enabling me to achieve the same physique like Arjuna or Karna, so that one day I too can be capable like these warriors and gain Shiva’s ultimate weapon called the ‘Pashupatastra’.

Shiva for me, represented the ultimate pinnacle and epitome of Masculinity or what a Man should strive to be in true essence of Spirit, Mind and Body.

133 comments on this post. Please login to view member comments and participate in the discussion.

Seneca’s Wisdom
How Many Times Do You Breathe in a Minute?