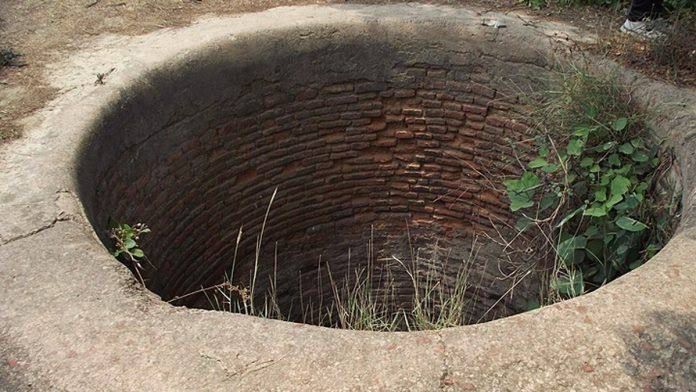 Search out for a bona fide spiritual master

A village pandita was very much devoted to his departed father. The pandita used
to say, “The father is the God incarnate, we are enjoying all earthly pleasures
simply by his mercy only. So I do not accept any other creator or Godhead except
my father.”
pita svarga pita dharma
pita hi paraman tapa
pitari pritimapanne
priyante sarva devata
This was the favourite verse that the pandita used to chant all the time. To chant
the name of his father, to meditate on the image of his father, and to give offerings
to his ancestral forefathers were his daily rituals.
The great-grandfather of this pandita had built a draw-well for his family s use.
In the past, the water drawn from this well happened to be widely known as the
sweetest and clearest of all the wells in the village. However, in due course of time,
after three or four generations of the family covering one hundred and fifty years
or so, the stagnant water of the well became extremely putrid. It was no longer
suitable for drinking or general use as a huge mass of filth, mud and all types of
plants had decomposed in it. One or two dead frogs also added to the
decomposition of the well. As such it became smelly and completely infested with
deadly bacteria.
The pandita, being devoted to his father used to drink water from the draw-well
dug by his great-grandfather. Actually his father had never taken water from any
other tank or river in the village so the pandita would never allow his family
members to drink any other water except from the ancestral draw-well.
The pandita, so loyal to his father, had a number of sons and grandsons, all of
whom died from various diseases. Eventually, even his wife died of a contagious
disease. The pandita himself also suffered from many ailments. There were quite a
number of tubewells in the village and the river Ganges was flowing only a few
miles away from there. Everyone was repeatedly advising the pandita to stop using
the water from that contaminated well and to drink water from other tubewells or
the Ganges.
By this time the pandita, due to his fanatical attachment to his ancestral father

and forefathers, and had totally destroyed all his family members as a result of his
obstinacy and die hard attitude. At last the local authorities came to destroy the
well to ensure good health in the village. When the pandita saw them
approaching, he squatted on the well in such an obstinate mood to his ancestral
forefathers, that it appeared to the authorities that not even royal power could
destroy it.
PURPORT
Persons who are adamant in getting initiated from a particular ancestral gosvami,
also demonstrate such an obstinate attitude. Anyone claiming himself to be one s
ancestral spiritual master may not be truly qualified through continued derogation
of dignity and position.

Srila Bhaktisiddhanta Saraswati Goswami Prabhupada used to say, “A doctor s son
may not necessarily be a true doctor.” Those who are careless about their own
welfare, extremely lazy and guided by the pleasure principle, never take the pain to
search out their true bona-fide spiritual master

A Thought!
A Trustworthy Parent