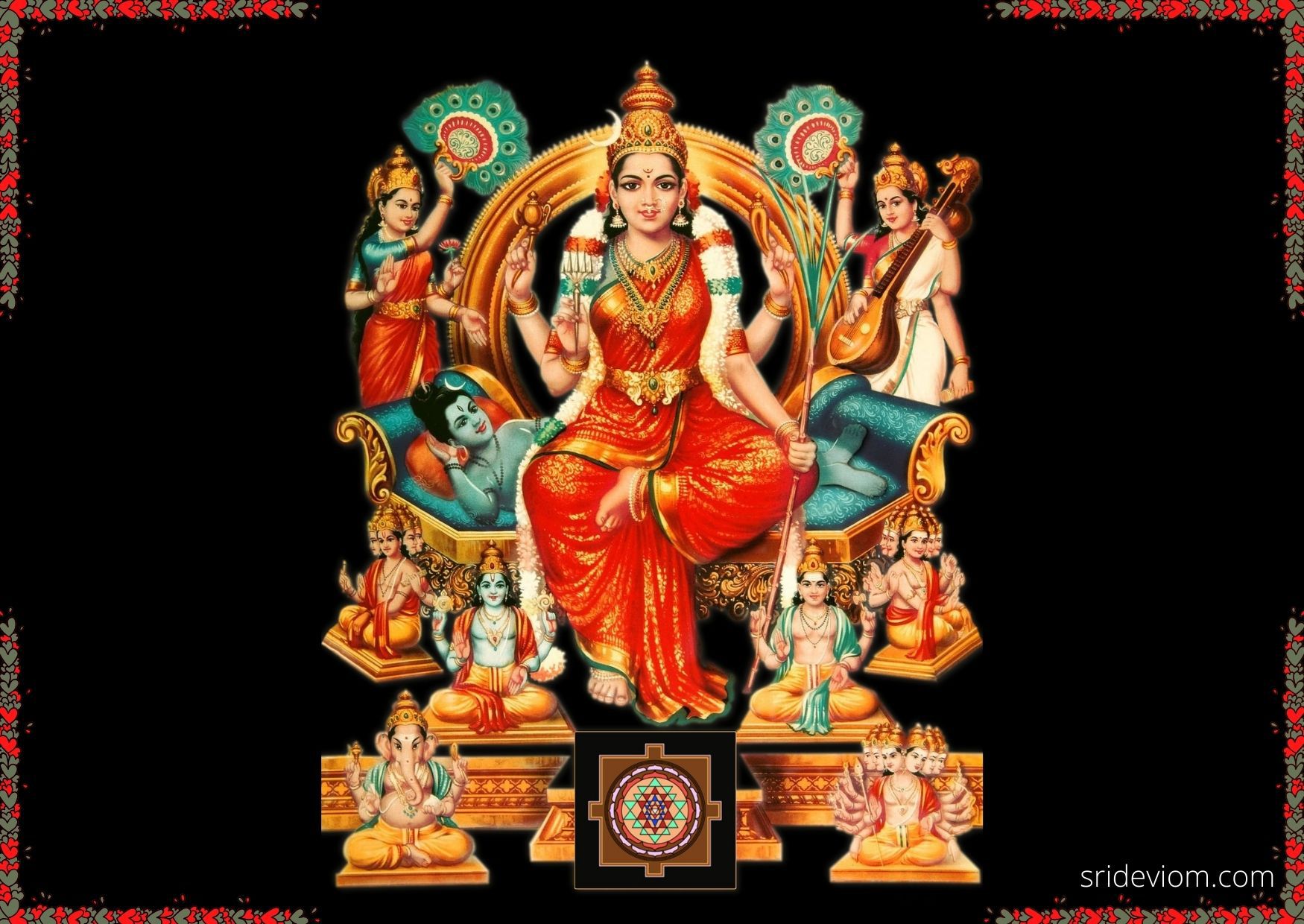 The Divine Mother’s Abode and Throne

The Lalita Sahasranamam glorifies Devi as Chinta-Mani-Griha-Antha-Stha and Pancha-Brahma-Asana-Sthita. These names mean the one who resides in the middle of a residence named Chinta-Mani and sits on a throne of five Divinities. Below is the esoteric interpretation of these two notable names as I understand it.

There is a Sudha Sagara or nectar-filled ocean within a sacred place named Sri Pura or Sri Pattina. Over there is a beautiful island of gems, the Manidveepa. Fringed with the celestial Kalpa trees, that island looks delightful and regal.

On those royal grounds stands the Chinta-Mani Griha, a palace with three domes and four doorways. The walls, coverings, and everything else of that mansion are made of Chinta-Mani gemstones. Within that palatial home reside many attendant Devis. At the center of that sparkling Chinta-Mani Griha, the Supreme Divine Mother is seated on her super special throne.

That’s the description of Mother Sri Devi’s residence as per the scriptures. From the standpoint of Sri Vidya Tantra, Sri Devi’s palace represents the Sri Chakra. The center where the Divine Mother sits is the Bindu or dot of that sacred Chakra.

Setting aside those details for a different day, here’s the esoteric meaning of the Chinta-Mani Griha:

As seen in the previous name, the Supreme Divine Mother is seated on her super special throne. This name describes that throne which consists of five Brahman or Divinities.

The Lalita Sahasranamam belongs to the Sri Vidya sect of the Shakta tradition. In this, the Mother Sri Devi is the Supreme Divine. When she manifests, she arrives as a combination of Parama Shiva and Para Shakti.

Parama Shiva and Para Shakti are the same. Yet, they are also different! For instance, in an atomic particle, there is matter. But, when we drill into it, we only find energy. Is the reality of that atom matter or energy? Or is it both simultaneously? In this example, that atom denotes the union of Parama Shiva and Para Shakti. That’s the state of Divine Union just before the creation starts. It also indicates the state of Samadhi, represented by the Bindu or dot in the Sri Chakra.

When the Parama Shiva and Para Shakti multiply into this world, they form the Pancha Brahman or the Five Divinities. They are Brahma, Vishnu, Rudra, Maheshvara, Sadashiva.

Once again, setting aside all the mystical aspects, here’s what these five Divinities represent:

That Supreme Devi who shines brightly from within us is Sri Devi. That Divine Mother remains a mystical external concept until we experience ourselves as Her residence. When we know ourselves as an abode of the Divine, we will also see the Divinity latent in everyone and everything around us.

My heartfelt prayers for the Divine Mother to take you to that state of merger with Her!

Happy Navaratri to you!

I Am Sorry Maa…
Divine and Devotion