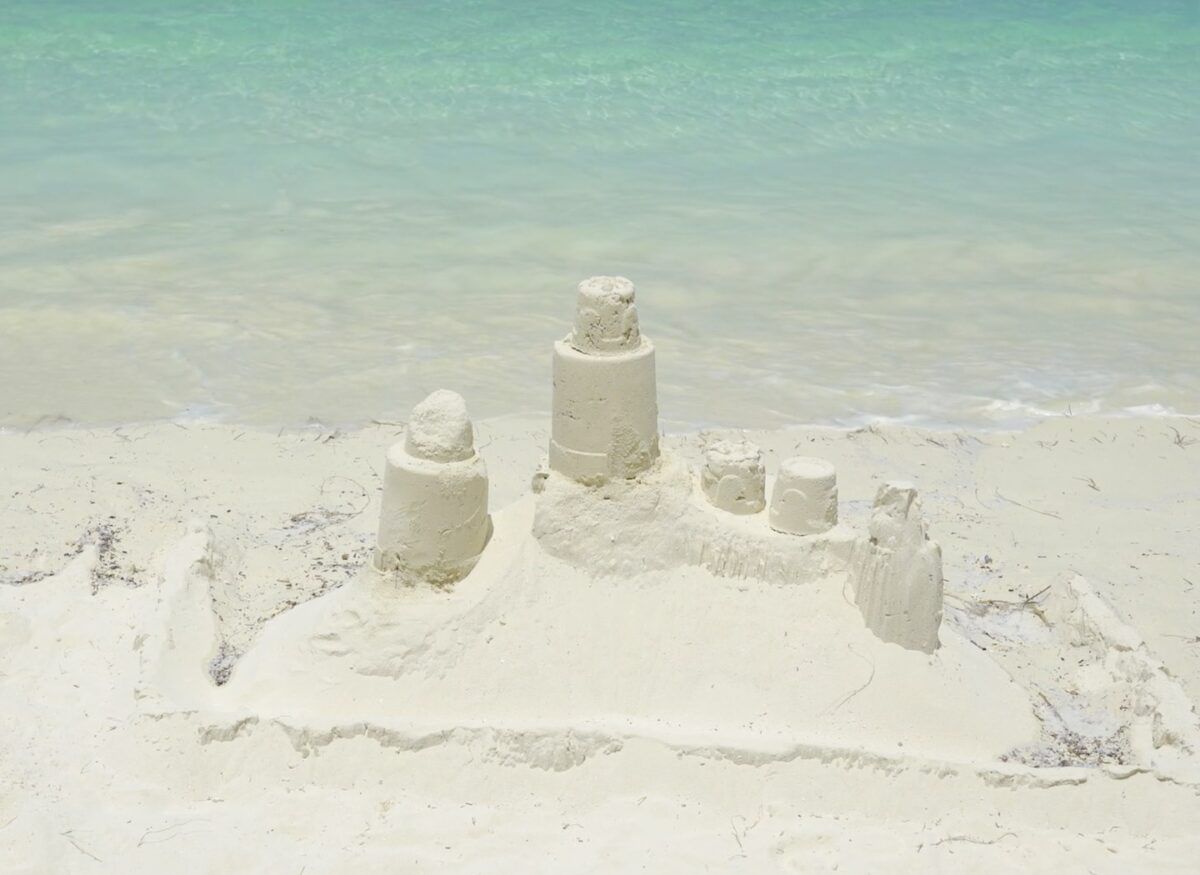 Last month while speaking to one of my life-coachees, the conversation steered towards human relationships and communication.

“How to deal with the hurt,” he said, “when others say negative and hurtful things to us?”
“There are many theories and methods,” I said, “but, perhaps the best I can do is share with you how I deal with it.”

I spoke for approximately five minutes in response and I thought I would narrate the same to you in this write-up. But as I sat down to write this post (after dilly-dallying for a good two hours), I was reminded of a beautiful and famous story from the life of Goswami Tulsidas. Born in the 16th century, he was a man of exceptional creativity who appeared a few decades after the birth of other saints like Guru Nanak, Caitanya Mahaprabhu, and Meera Bai. It was the golden era in India’s spiritual history where pithy Sanskrit verses from the Vedas were translated and transmitted to the masses in regional languages. Everything these saints expressed was about the highest form of love.

Goswami Tulsidas was no different. It was, therefore, no surprise that when he got married, the floodgates of love burst open from his heart, as if this was the moment he had been waiting for his entire life. Within a few weeks, he found himself deeply attached to his beautiful wife, Ratnavali. All else went on the back burner and everything Goswami wrote or did for the first several months was to express his love for his wife. But human love is a strange thing. It can get too much. And so it did.

Ratnavali had been keen to visit her parents but Goswami wanted her around all the time. Many months later, one day, saying that she could postpone it no longer and really wished to spend a few weeks with her parents, Ratnavali left for their home. Goswami was distraught with pangs of separation and couldn’t bear to be without her. It was pouring buckets the next day but nothing could stop him. He walked all day in the lashing rain and not knowing how to swim, he crossed the raging Ganges using an earthen pot. Shivering and drenched in the incessant rain (and love), with thorns still stuck in his bloody feet, scrapes and bruises on his arms from the shrubs and bushes, with his raiment torn in many places, the lovelorn Tulsidas clambered up to his wife’s room using a vine.

“I can’t live without you,” he said, giving her a tight embrace.

A startled Ratnavali pushed him away, and said, “What has come over you? How did you get here?” She scorned her husband in his dire state.

The once stately and graceful brahmin, the scholarly man everyone revered, stood before her like a vagrant, a nomad. The childlike and excited Goswami, swooning over his wife, narrated his long journey.

“But you don’t know how to swim,” she said. “How did you cross the wild Ganges?”
“Oh, it was easy. The boatman refused so I used an earthen pot lying nearby.”
“What if it broke, you could have drowned. How did you climb into my room?”
“Through the vine just outside,” Goswami replied.
“Fie on you,” she said. “It must be a snake or something because there’s no creeper on the wall. You couldn’t let me be even for a few days. What will my parents think? What will the world say? You have shown up here like a beggar.”
“What are you saying, Ratnavali? I am here because I love you and I can’t live without you.”
“This so-called love of yours is embarrassing and suffocating,” she said. “Rather than coming here dressed like an educated husband and bearing gifts for my siblings and parents on your first visit, you have barged in like a thief. And if indeed such is the intensity of your feelings then I wish you had had this love for God. Instead of just writing your poetry for him, you would have actually found him by now.”

Goswami was so hurt that he forsook Ratnavali then and there.

“Till my last breath, I will love only my Rama now. He has opened my eyes through you, Ratnavali, so I thank you. God alone is worthy of untethered and unconditional love. This is the last time this mouth has uttered your name.”

He never got back together with Ratnavali nor did he remarry. Devoting every waking hour of his life to the service of God, he went on to compose remarkable, poetic works of devotion of which the Ramayana in Hindi (Avadhi to be precise) also known as the Ramcharitmanas is the single most important piece of literature of the bhakti era.

It is not uncommon to see that some of our strongest resolutions and most profound realizations emerge from incidents and words that we find hurtful. What is ‘hurt’, anyway? No more than a mighty wave crashing against the castle of your dreams you built painstakingly. We form an idea in our mind, a world in our head about something, someone, and when we are jolted by the other person to reconsider our position, it hurts us. And when we are hurt, we tell ourselves a story about why we are hurt. That story is often biased if not bogus for the most part. The bottom line is that when we find others’ actions or words undesirable, we are offended which in turn makes us feel hurt or even betrayed. For example, in a divorce, the party that doesn’t want it will always feel hurt and let down no matter how gently you break it to them.

I would say that a degree of hurt caused by negligent words is not only inevitable but essential for growth. For, life-changing wisdom and at times incredible transformational shifts are triggered by episodes, incidents or moments of such hurt. Getting back to the original question, how to get over it when someone says things to you that you find hurtful? It’s not that hard, actually. Here’s my original method of three simple steps:

When you are confronted by someone or if they say something that hurts you, by all means, you can choose how you wish to respond to them but doing so doesn’t mean you’ll get over the feelings they provoked. So the first question you have to ask yourself is: is it the truth? Agreed, I don’t like what they are saying, that I am offended, but whatever it is they are saying, is it the truth? Whether I like it or not is a different matter, right now what’s important is to establish if their words are true. Are they stating a fact? And if the words spoken were not false then I’d better be reflecting on them instead of feeling hurt, which invariably leads me to the next point:

Whatever they have said to me or to others about me, does it matter to me? Irrespective of how true or false the words might have been, the question is if the opinion and words of this person matter to me. Do I give this person and his words the right to infringe upon my heart and mind and ruin my peace? Do I respect this person enough that I’d let their opinion affect me? This whole ‘does this matter’ reflection is an important step. Everyone who knows you or doesn’t will have an opinion on everything you say or do. That doesn’t mean that it’s the right one or that it should matter to us somehow. If you are really evolved, you will learn that you are under no obligation to change the opinions of others about you. It’s not the burden you need to bear. At any rate, if you don’t mind, it doesn’t matter.

3a. Do I want to do something about it?

One of the things that comes with maturity of consciousness is the wisdom of knowing I don’t have to fight every battle. That, it’s perfectly okay for others to disagree and not like me or my work. Whatever hurtful words are hurled at me, whether they be true or not, I still have a choice to make. And that is: do I want to do something about it or let it be? If upon some reflection, you figure that you don’t want to let it go, well then, move to 3b.

3b. When and how do I want to respond?

If you have decided that you are hurt and it mattered to you and you are going to do something about it, the next thing to do is stop. Yes, stop and just think about when and how you would like to get back to them. Responding in kind may neither be befitting nor beneficial. You don’t want to turn every irritation and friction into conflict when you can avoid it. Instead, just sit on it for a while, catch your breath, gather yourself and then work out how you wish to proceed. Spontaneity is good but thoughtful responses lead to better outcomes on all fronts.

So when someone says anything hurtful to you, you’ve got to ask yourself if it hurt you because it was unpleasant to hear or if it was an uncomfortable truth, or simply because it was untrue. For it helps to know the truth even if we don’t like it. After all, truth is the fuel that propels human consciousness towards its glory and grandeur. All else is pretense.

249 comments on this post. Please login to view member comments and participate in the discussion.