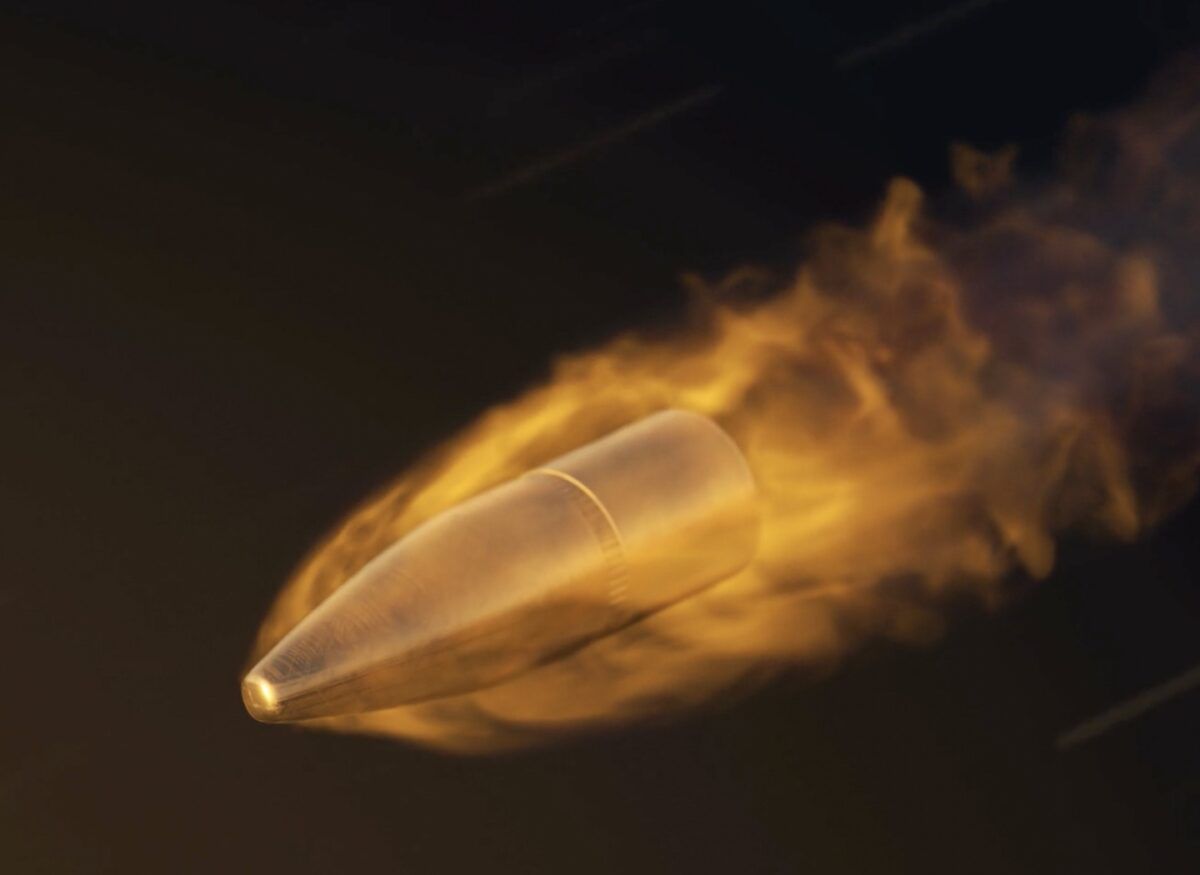 When a bullet is fired from a gun, it leaves the barrel moving 1,300 feet per second, breaking the sound barrier. If shot at the ideal trajectory (45 degrees), it can travel for nearly two miles. But a bullet isn’t just powerful. It’s equally precise. In a steady hand, a bullet will strike its target with pinpoint accuracy, time and again. What enables a technologically simple device to achieve such extraordinary power and precision?

Most people’s answer is gunpowder.

When the trigger on a gun is pulled, a firing pin strikes the bullet, causing the gunpowder inside the bullet to burn. The burning gunpowder produces gas that rapidly expands, creating enormous pressure inside the barrel of the gun. The only way for the gas to escape is to push the bullet out through the end of the barrel.

A bullet needs gunpowder to fly. But gunpowder alone doesn’t enable a bullet to achieve such incredible distance, speed, and accuracy. When an object takes flight, be it a bullet, an airplane, or a pitcher’s fastball, two opposing forces are at play. There are propelling forces that thrust the object forward (gunpowder, a jet engine, or a pitcher’s arm). And there are constraining forces (gravity and wind resistance) that operate against forward progress.

Gunpowder isn’t the wrong answer to the question, What makes a bullet fly? It’s just woefully incomplete. Gunpowder explains why a bullet leaves the barrel with such tremendous force. But the reason a bullet is able to fly with pinpoint precision over a great distance is because a bullet has been optimized to reduce the principal friction operating against it—drag. Drag is the resistance an object encounters as it moves through air. To experience drag for yourself, try putting your hand out the window while driving on the highway.

Drag is the biggest obstacle to a bullet’s flight. That’s because the faster an object moves, the more drag it encounters. If you add more gunpowder to a bullet, it will leave the barrel with greater speed. But that increased speed also increases the drag pushing back against the bullet. That is why all bullets are rated according to their drag coefficient — the lower the drag coefficient, the better (and more expensive) the bullet.

The reason a bullet flies so well is not because gunpowder gives it thrust. It’s because a bullet is aerodynamic. It has been constructed to reduce the friction operating against it.

The longish passage above has been taken from The Human Element by Loran Nordgren and David Schonthal. If you haven’t read this book then I highly recommend that you do. Particularly, if you are an entrepreneur or a CEO or anyone (puppies and aliens are excused) who has ever wondered why people can’t seem to shed even simple undesirable habits.

In order to change the behavior of those around us, just showing them the right path is not enough. Arming them with more data or evidence does not get them to change. In fact, if anything, it only increases the resistance. Now you also know that adding more gunpowder doesn’t mean more impact. How to overcome the resistance then? David and Loran go on to list four kinds of frictions you face when you seek to change anyone’s opinion on any matter at all. 1

As follows. (Direct quote in italics. Unstyled text, mine.)

1. Inertia. The powerful desire to stick with what we know, despite the limitations. Inertia explains why, when attempting to change behavior, you should always give people multiple options.

I have come to this realization over and over again that you can get anything done from anyone as long as they believe it’s their idea. And one easy way to do that is not take away the other person’s freedom of choice. If you give them options, if you let them choose, you can not only motivate them but inspire them. Everyone likes to feel that they are in control of their thoughts, actions, and life in general. Giving the other person an option strengthens the feeling that they have the power over themselves, their choices and circumstances. Empower them with the freedom of choice to overcome inertia. (Not too many options though, lest it leads to the paradox of choice. Up to three, max four is a good number.)

Make it easy for them to adopt and accept your idea. If you are going to make it too hard (by making it complex, complicated, or smearing it with too many choices), your idea is unlikely to ever take flight. Keep it utterly simple so that they look forward to putting in the effort rather than feeling intimidated by it. (For example, most of my readers felt discouraged to take up sadhana because I went into excruciating detail in my book, The Ancient Science of Mantras. The whole thing came across as complex and arcane.) If you want to diffuse the resistance to any idea, make it easy for the other person to understand, try, and eventually, fully adopt your idea.

3. Emotion. The unintended negative emotions created by the very change we seek to make. Emotional Friction is the reason why cake mix took 30 years to catch on. 2

Do you really feel that a $26,000 Zegna coat is so priced because of the material? Or is it our perception of the brand? Those who buy it can have any rational justification, but it all boils down to what they feel when they think of this coat. If your idea does not emotionally connect with others, it will not take off, no matter how amazing it is. It goes for all the ideas you have inside and outside your home.

4. Reactance. The impulse to resist being changed. Reactance reveals why Americans waged war against seat belts in the 1980s, why strong evidence is often worse than no evidence at all. If you wish to understand this concept deeper, go ahead and read The Catalyst by Jonah Berger.

This is one of the hardest frictions to overcome because the fact of the matter is that most people just don’t want to change. Before they’ve even had the chance to try something new, there is a natural impulse which triggers them to say no. Want to watch this action film that stars an actor you don’t like? No. Wanna try this aubergine dish? No. Try this dessert. No. Quit this job if you are unhappy. No. Break up with him if he’s abusive. No. Once our emotional or subconscious mind has given an immediate no, we then rationalize it and come up with absurd answers to justify our choice. Hence, before the other person says No, give them the option, feeling, and conviction to say Yes. Since if at first, they blurt out a No, a Yes may never come because people like to stick to their choices.

I remember when moving about in the corporate world, I had grown so weary of client lunches and dinners (a practice I learned while at Deloitte), but they were extremely helpful. Did you know that if you feed someone well or you share a few laughs with them (seven times to be precise, they say), it is hard for them to dislike you or disagree with you? Some of the most insightful and genuine client feedback we would receive wasn’t around the meeting tables in boardrooms but at the dining tables in the clients’ favorite restaurants.  And most of the time such meetings-over-meals would be followed by the long awaited signatures over the next few days or weeks. So yes, eat well and feed well.

Now then, let’s get to the point. I wanted to share this great idea I had the other day. Just kidding…

216 comments on this post. Please login to view member comments and participate in the discussion.