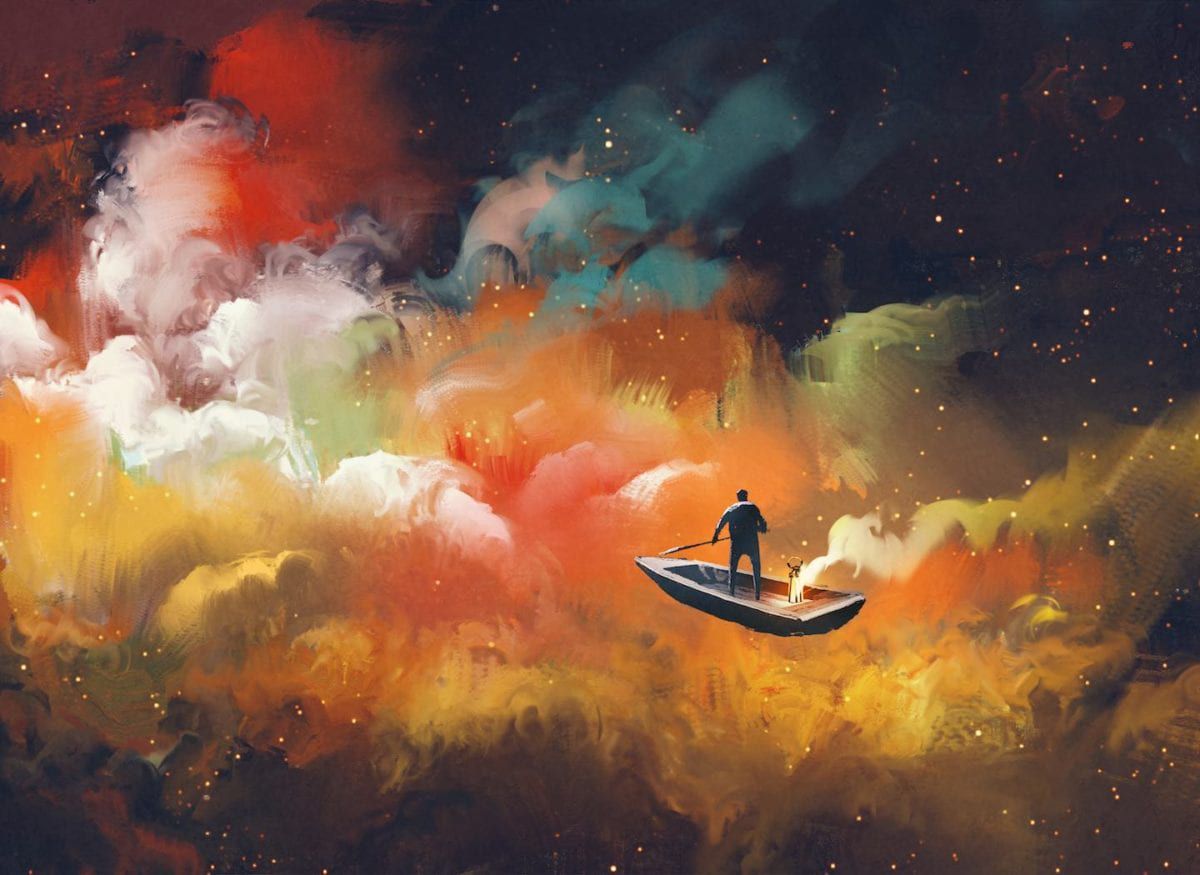 What do you believe in – Destiny or Free Will?

After all, if everything is predetermined then what’s the point in putting in any effort to accomplish any dream, and if it’s all in our hands then why do we go through helpless and unexpected situations in life?  Let me share with you a short story.

Just a couple of days ago, during the ongoing annual celebrations at the ashram, I heard a beautiful story from the orator narrating the glories of the Mother Goddess.

More than 450 years ago, there lived a farmer by the name of Maluk Das in India. While growing up, he had seen his father and grandfather toil in the fields and hard work was the only way he knew to fulfill his own and his family’s needs. One day, a wandering saint stopped in his village to deliver a sermon and Maluk happened to drop in.

“The one who surrenders to the will of God,” the saint preached, “and, does every act with God in his heart will never have to sleep hungry. God will always take care of such a person.”
“With due respect, Maharaj,” Maluk Das interrupted, “God may be the provider but I still control my life and earn my own livelihood with my actions.”

“Maybe. Ultimately though, God’s will prevails.”
“I don’t think God will just drop food into my lap unless I work for it.”
“He operates in mysterious ways,” the saint replied smilingly. “And, let me tell you, if he wants to feed you, you will be fed.”

Maluk vehemently disagreed and the argument went on about destiny or free will, until they finally agreed on a wager. It was decided that if God was real then within the next 24 hours he would somehow feed Maluk no matter what he did.

“Are you saying that even if I go hide somewhere and do nothing, he will still feed me?”
“Yes.”
“Well then, if God provides me food by tomorrow sunset, I’ll become a firm believer and accept everything you say. But, if he fails, you will renounce your robe and work with me in the fields.”

“So be it,” the saint said raising his staff. “He’ll make sure you are fed. I have faith.”
“I’m going to run off to some remote place!”
“It doesn’t matter where you hide, Maluk. God is omnipresent and he’ll feed you.”

Maluk Das waded across the river, into the woods and perched on the branch of a large tree.

No one will come here. No one even knows I’m here. The saint is sure to lose. I’ll see how God can feed me now.

Sitting on the tree, he waited patiently. A few hours later, late into the afternoon, Maluk heard some noise. A weary group of travelers was passing by and seeing this giant tree, made a stop. They spread a sheet under the shade and put down their belongings.

Tying their bag full of food on one of the branches, they went to the nearby river to freshen up first. Maluk was stunned to see the bag hanging just a few branches beneath. “It’s not God’s doing, just coincidence,” he told himself. “They’ll be back any moment and take this.” Surely enough, the travelers were coming back to the tree when the fierce and loud roar of a lion ran through the jungle.

Praying for their lives, they ran back to the river and out of the woods. Maluk was left alone with that bag of food. Still unwilling to accept God’s hand in this, he refused to untie the bag or partake of its contents. No one can force me to eat unless I want to.

The bright sun turned orange, dusk arrived, twilight emerged and soon it was turning dark. Maluk was hungry and starving but he was adamant. Birds returned to their nests, nocturnal animals began roaming about when Maluk heard the footsteps of a few horses coming nearer. It was a gang of dacoits en route to their hideout.

“Look, Sardar!” One of the horsemen pointed at the bag. “Perhaps, someone forgot their bag here.” The bag was within arm’s reach as he was on horseback. The mat on the ground and a couple of parcels of clothes etc. that lay nearby were also brought to the chief’s notice. They guessed that either some travelers had to run away due to a wild animal or someone was here who had heard them and escaped.

“We could do with some food!” Four men tethered their horses to the neighboring trees and opened the bag.
“Wait!” their leader warned. “It could be a ploy to catch us. It could be poisonous food. The king’s men must be on alert after our latest heist just yesterday. The way the sheet is spread and the food is fresh, someone is in the vicinity.”

With the intention to scour the area, they lit their torches and spotted Maluk Das sitting on the same tree. Pointing their spears at him, he was forced to clamber down. When Maluk wouldn’t admit that it was his food or that he knew anything about the people who left it there, the chief became furious.

“Eat this food!” he ordered.
“I can’t, I won’t,” Maluk protested.
“Give him a sound beating,” the chief commanded his men. “Kill him if he refuses to eat.”

Against Maluk’s wishes, he was forced to gobble that food. Seeing him alive still, once the bandits were certain that it wasn’t poisoned, they finished the rest and leaving Maluk behind, went their way.

Prayer, faith and gratitude sprang from Maluk’s heart and he spoke:

I know some will contend that if God is looking after us, why are helpless children dying from starvation in many parts of the world? The truth is, I have not cited this story to assert God’s grace or his existence (something that can only ever be felt and not proved). Nor am I equating destiny with some supernatural hand. Instead, I have mentioned this story for an entirely different reason: to shed some light on destiny versus free will.

In my view, the question of destiny or free will is a philosophical problem and has little to do with our real lives.

This question has no meaning to begin with. Just because we can string together some words and put an interrogative mark at the end does not mean we have formed a valid question. For one thing, we can neither prove nor disprove either destiny or free will. When you take one as the sole truth, you’ll find plenty of contradictory evidence.

With destiny, we are assuming that something that is bound to happen will happen no matter what. And the concept of free will states that our life happens to us at our discretion, that we make free choices uninfluenced by anything called karma, destiny or whatever. The truth is somewhere in between.

At any rate, I prefer to look at life differently. In my world, from my perspective, it’s not about what is predestined versus what isn’t (we can’t reasonably ascertain that). It’s more about what is or isn’t in our control. For better or worse, once we take action, we just never know what else it may lead to. We don’t even have to go very far into our history.

Simply examine some of the greatest scientific discoveries of the past 200 years. While there’s no doubt that those brilliant scientists and inventors discovered many great things laboriously, the fact remains that often when deeply engrossed in working towards something, they chanced upon something totally different, a completely unexpected result. And that’s the keyword: chance rather than destiny.

Some things that happen in our lives are due to our planning, skills and hard work, while many others are by pure chance. You can have the most loving relationship and yet your partner may still fall for someone else. Even then, chance cannot occur outside a framework though. You can’t directly win a lotto without buying a ticket, for example. Chance is the understanding that there are many things completely outside my control. The only thing I can do is try and improve the odds. And that’s all I can do: try.

The moment I begin to base my success on the effort I place in an endeavor and not on the outcome I accomplish, I will experience peace naturally. Our world, however, operates on results, attainments and accomplishments. Believe it or not, how well you score in a subjective exam can never be solely dependent on how good your answer is, for instance.

How many papers the examiner has already read before yours, what his or her mood is like, how good your handwriting is and many other factors are going to determine the score you’ll get. Chance, destiny, luck, karma? You can only improve your chances of scoring well by doing whatever you can.

Rather than worrying about the outcome of an act already committed, or blaming our failures on destiny or anything else, or vainly trying to control everything in your life, it’s a lot more sensible and rewarding to do the best you can. If you can look yourself in the mirror, put your hand on your heart and say to yourself, “I did the best I could.” That’s mostly what matters. Do better next time if you can.

A lady buys a new car for her husband and hires a new driver. At the end of the first day, the man complains to his wife.
“Fire this driver! He had me nearly killed three times in just one day!”
“Don’t be so hasty, honey,” the wife replies calmly. “Give him another chance!”

If must you assess life in the framework of destiny or free will, here it is: what you control is free will and what you don’t, destiny. Our life has both aspects. No one asked Maluk Das to raise a wager or flee to the woods. Had he not done that one act, many subsequent ones could have been avoided.

Then again, had he stayed back at home, something else could have transpired. Either way, there’s no way to predict it. What is more important is to give our 100% to whatever we undertake. When it comes to destiny, I can tell you one thing though: if you have something to offer to the world, a skill, some talent, a gift etc., Nature will take the work from you. Each one of us is inherently propelled to realize our full potential.

Whether something can be accomplished or not, we won’t know till we try. And try we must. That’s all we can do and that’s been the basis of the remarkable progress our race has made.

Instead of thinking of destiny or free will, begin with the assumption that you can transform your life, you can master yourself and you can write your future. Once you set your mind, give your everything to make it happen. Whatever be the outcome, the journey itself becomes every bit worthwhile. Why live any other way?

Purpose of Life
A Spiritual Attitude