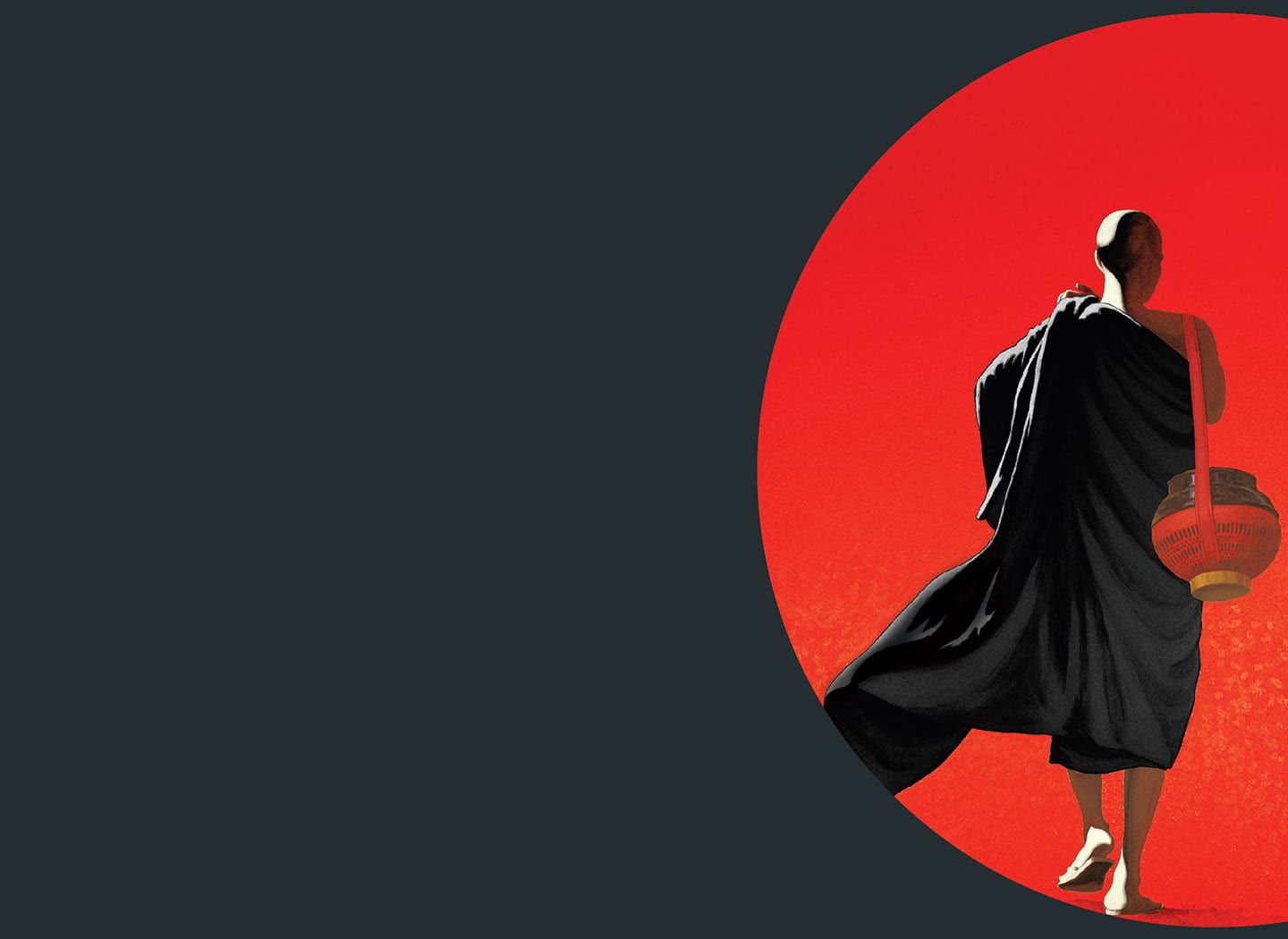 The emperor of China during the Yuan dynasty wanted to have his picture painted. “I’m not satisfied with my portraits done thus far,” he said to a large gathering of artists. “Paint me a picture with the minutest detail, my spitting image.”

The king sat down every day for two hours while the finest painters observed and painted him from different angles. Devotedly and carefully they moved their pencils and brushes on their canvases. Vying for the reward, all would wrangle to have the front row so they could examine him thoroughly and capture the tiniest detail. All but a Taoist monk-painter.

He requested the king that he be given a separate room where he could construct his most accurate image from his memory.

“Kill me if I fail to portray every detail,” he declared. “But, no one will see my painting till I finish. This is my only condition.”

His request was granted and three of his disciples joined in to help him. The four of them would enter the room, stay there for the entire day and come out only in the evening. At times sounds of scraping etc. could be heard. Unlike other painters hands’, theirs were never smeared in color. Dusty at times, but never smudged. No one knew how exactly they were painting.

At the end of one month when the emperor was still not happy with any of the portraits by other artists, the Taoist master announced that his painting was complete. It was done on a wall, he added.

Eager and intrigued, the king entered the room brimming with silence. The wall was covered with drapes of silk. Some candles were placed as if strategically. The master was gently smiling. The monarch pulled the curtain and a glossy wall emerged.

On a super smooth surface, which had been once a coarse wall, the reflection of the emperor shone gloriously. A smile broke out on the king’s face, the image smiled as well. The king turned to the left, so did the image. It was a moving portrait, a live painting that captured every detail.

“This is Wu Wei, Your Holy Highness,” the master said, “the way of Tao. The action of non-action.”
“I must admit,” the emperor chuckled, “this is very clever. It’s the most accurate image anyone could have created.”
“With due respect, O Lord of Ten Thousand Years, I never created this image. I merely created the conditions and the portrait made itself.”
“Not sure if I should reward you for your painting or your wisdom.”
“The conditions have been created for both,” the master humored and bowed.
The emperor honored him with a lavish compensation.

So it is with life, I suppose. Whatever we want, we have to create the conditions for it. In our obsessions to realize our dreams, often we end up so focused, even self-centred, that we forget that until we create the right environment around us, we can’t truly attain our goals. In our reckless pursuit, our conditions become our greatest impediments on the path.

You want harmony in your life, create a setting that fosters it. Want love? Work on the attitude that evokes it. Want success? Manifest the conditions that support it. Results are not created, they come by themselves. What we create are the conditions conducive to what we hope to attain.

Wu-Wei implies that there’s an inherent flow, a certain natural order to everything. You just have to let it course through. Recklessly struggling towards a goal is not always the best way to attain it. Sometimes, you have to let it be, give it time.

When you sow a seed, you diligently work in creating the right conditions. Leave the ground soft, moist, fertilized and the seed will germinate. It’ll turn into a sapling then a plant and a tree. The seed in itself requires little care, it’s the environment that needs your attention. Similarly, the goodness in your life, peace in your heart, a smile on your face comes naturally when you create the right conditions. And this is Tao in a nutshell as well — let natural things happen naturally. Interference is not the same as intervention. Know the difference.

A lady called her Taoist master and got his answering machine that said:

“Hi!
This is my questioning machine and the two questions are:
Who are you and what do you want?
Think carefully before responding. Remember… most people leave this planet without ever having answered these questions.
Beep.”

With life too, the only way to arrive at its answers are to examine its questions. If you don’t expend your energy in creating answers (results) but conditions, wisdom and insight will come to you like a beautiful dream. Life will happen to you. It’ll arrive at your doorstep and wake you with a melodious morning song, soft as the winter sun. The Tao says that most goals are not gained by struggle but patience. As Lao Tzu said in Tao Te Ching, “The flame that burns twice as bright burns half as long.”

Be patient, be simple and let life flow. This will give you the wisdom to know when to swim versus just float. You’ll know when not acting on something is the greatest action, in fact. Wu-Wei.

This is the secret of a good life — knowing why, when, where and how to act versus not. This is the entire philosophy of Bhagavad Gita, the essence of karma in one simple sentence.

On a different note, I would like to take this opportunity to express my gratitude to Ismita Tandon and Swami Vidyananda. Ismita assiduously edits all my books and Swami Vidyananda has been in my personal service for more than five years. His devotion is unearthly. At first I was hesitant but then deeply touched at their gesture of documenting their experiences with me to share it with other devotees. It takes an incredible amount of effort to write a book. With their childlike hearts and disarming candor, they narrate a myriad of incidents in their book Om Swami: As We Know Him. When I read the book, I felt that a certain honesty and openness must reside in the reader’s heart to appreciate the truthfulness in the narrative, particularly the first part. And truth is what I stand for. Truth as it is. Here’s a small excerpt from the book in Swami Vidyananda’s voice:

One time, two devotees, young men, came to the ashram with a small bag of apples. They insisted that Gurudev take at least one of the apples. Gurudev took out one apple from the bag, whispered a mantra on it, but just as He was about to bite into it, He put it back in the bag.

‘I’m sorry,’ He said. ‘I can’t eat this because fruits have been taken from this bag and eaten already, before I could offer the first one to Mother Divine.’
The two men hung their heads in shame. ‘We are very sorry, Swamiji,’ they said. ‘We were hungry on the way so just before crossing the river, we had an apple each.’
Gurudev laughed heartily and said that was good – only He could no longer eat from that bag.

Another time, a woman had made sweetmeats for Gurudev and brought them carefully parcelled to the ashram with her husband and young son. Once again, they insisted that He partake from her offering.

‘Has it been tasted at all?’ Gurudev asked as soon as He lifted a laddoo.
‘Not at all, Swamiji,’ they said. ‘We knew that you would not accept it otherwise.’ Gurudev smiled and murmured a mantra. But before eating it, He put the laddoo down and said, ‘I’m sorry, but it’s not fit for offering.’
‘We swear, Guruji,’ the wife and husband said in unison. ‘It has not been tasted.’
‘You are not lying, but you don’t know,’ Gurudev said. He looked at the child sitting next to them and called him closer. He stroked his head.
The child said, ‘Sorry, mummy. I had one laddoo when you left them to cool down and stepped out of the kitchen. I couldn’t resist it.’

The woman rose to scold him, and the child cowered in fear. Just then Gurudev drew the child closer to Him. ‘Don’t!’ He stopped the mother. ‘He ate means Mother Divine ate.’ Gurudev lifted the box of laddoos and gave one to the child and ate one himself.

The family left, but Gurudev’s face had become sombre. ‘From now on,’ he said, ‘I’ll offer my food differently to Mother Divine so that no one ever gets scolded or has to worry about offering any food to me. It wouldn’t matter then whether it has been tasted or not.’

Published by HarperCollins India (immense gratitude to the brilliant Ajitha Ganeshan, Commissioning Editor, HarperCollins), the book is available worldwide in both paperback and Kindle. Go here if you are in India or here for rest of the world.

The Path of Om Swami
How Not to Attract