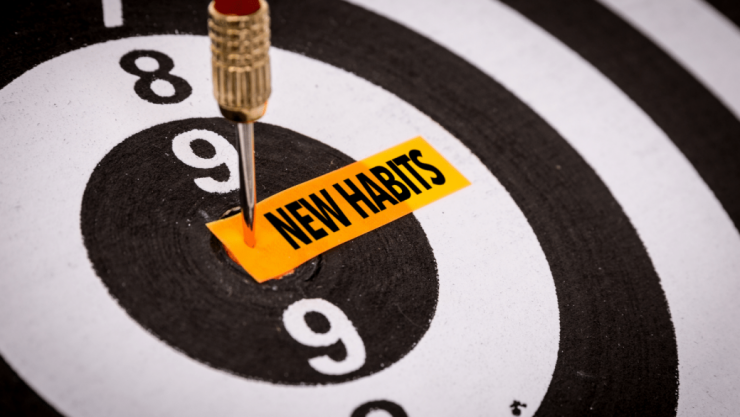 Whatever we do repeatedly, we become.

The alarm goes off at 6:00 AM. You roll over, swipe left to snooze and go back to sleep. 10 minutes later, the alarm goes off again. Your eyes flicker open, you fling the sheets off and your feet touch the floor.

You head to the washroom, brush your teeth, grab your towel and hop in the shower. You finish your shower in eight minutes, towel yourself dry and step into your room. You apply moisturizer, pull on your clothes, run a comb through your hair and you are ready.

Welcome to the world of habits.

What is a habit?

A habit is an action that has been repeated so often that it has now become an inextricable part of our life. Most times, habits are unconscious behaviours. When was the last time we brushed consciously, noting the way the bristles swiped over our teeth?

How do habits form?

Habits form deceptively easily: when we do something enough times, it becomes a reflex. And whatever we do repeatedly, we become. Did you know that even sadness is a habit? The good news is, so is excellence!

Be it bad habits or healthy habits, the power of habit itself is exceedingly strong. For example – when you wake up in the mornings, your first instinct may be to reach for your phone even when you don’t want to. You try putting it on airplane mode the night before, you leave it across the room so you aren’t tempted to touch it as soon as you wake up. You may even stow it away in another room.

But to no avail. All too soon, you find yourself slipping back into the same old habit.

This was certainly not the case when you were a child. The mobile phone wasn’t available to you then. More importantly, your habit was different. Your first instinct back then was to jump out of bed and get ready for school.

Reaching for the phone in the morning is indicative of many other habits – instant gratification, seeking distraction from reality and lack of discipline being just a few.

In the spring of 1966, a man named Ernesto Miranda was arrested in Phoenix. The police had very little to go on, but they suspected Miranda of kidnapping and raping an 18-year-old woman ten days earlier.

The officers interrogated Miranda for two hours and were rewarded for their effort: Miranda admitted to the rape charge and signed a confession paper.

There was just one problem. During the interrogation, Miranda had been alone and at no point was he informed that he had the right to legal counsel.

When the case went to trial, Miranda’s written confession was used as evidence. He was quickly convicted, but his lawyer appealed because Miranda had never been informed of his rights and thus, according to his lawyer, the confession was not voluntary.

The Arizona Supreme Court upheld the decision, but eventually the case made it to the United States Supreme Court.

The Supreme Court had just created a bright-line rule, the Miranda Warning that is today narrated by every police officer making an arrest. Without this warning, any confession or evidence of a crime is void in court.

Now, what is a bright-line rule? It refers to a clearly defined rule or standard. It is a rule with clear interpretation and very little wiggle room. It establishes a bright line for what the rule is saying and what it is not saying.

The Miranda ruling is one example. If a police officer fails to inform a defendant in custody of their rights, then the suspect’s statements are not admissible in court. Plain and simple. Clear and bright.

Why this anecdote? Well, when we want to break a habit, creating a bright-line rule is pretty much essential. Otherwise, just as a rapist like Ernesto Miranda walked free, so too will our mind take a freefall down the slippery slope of lazy, bad habits.

Do you remember your New Year’s Resolution?

I’m going to spend less time on my phone this year and more time reading, for example.

‘Less’ and ‘more’ – two of the most common refrains in breaking or forming a habit. But when broken down, they are vague promises; fuzzy, fluid concepts that hold little to no value.

If you want to break a habit, begin by replacing it with a concrete, iron-clad new habit.

This is ‘less’ and ‘more’ in solid wording. This is a resolution that can be followed because not only does it break an old habit, it creates a new one with a break day where you can watch Netflix so that you are not tempted to give in on the other days (😊)

This is ‘more time’ brought to life. Here is a solid resolution again that will stand the test of time because it outlines exactly what you plan to do.

Want to create a successful habit system in your workplace or at home? Look no further than the classic, The 7 Habits of Highly Effective People by Stephen R. Covey, which speaks about creating transformational change in your life by changing your habits. Here’s a quick look at the seven habits:

Looking to break your old habits by creating new ones? Atomic Habits by James Clear is the go-to for all things habit. As the tagline of the book promises, it’s all about tiny changes and remarkable results. Getting back on track even when you veer off course is possible with Atomic Habits.

Ultimately, be it breaking the habit or creating the habit: as author Charles Duhigg says, the real power of habit lies in the insight that your habits are what you choose them to be. His book? The Power of Habit.

So, what are you waiting for? Get to breaking and creating now!

The Bright Line Rule concept and Miranda Warning anecdote has been quoted from James Clear’s article.

Still unsure about how to start building new habits? No worries! The FAQs below are sure to answer any remaining questions you may have.

1. Why is it hard to change one’s habits?

Most of us have a certain threshold of pain or adversity. It’s our glass ceiling. When we reach that point, we [often] give up. This not only takes on the form of a vicious cycle that sees us back to square one over and over again but becomes our life’s universal pattern, our destiny’s blueprint.

And the important thing to note is that until you break this pattern, you will find yourself facing the same challenges repeatedly. As if you are on an infinite loop. This sounds insanely simple but that’s usually the nature of truth: simple.

Mastering any skill, breaking behavioral patterns or hardened tendencies, rewriting your life’s blueprint, or simply success in a nutshell is akin to what I just wrote.

If you falter just when you must not, you will find yourself in the same rut again. The same cycle will repeat. The same pattern will emerge. Every. Single. Time.

Gibran says as much, in When the Dog Barks.

2. What are the 4 stages of competence for habit-building?

The singular important common denominator in the lives of all successful people is this: they almost always open their day with a productive morning. They have a routine that they stick to no matter what.

Most people we call gifted are usually the product of relentless discipline, dedication and hard work. Whatever you wish to master, give it a bit of time every day and before you know it, you’ll be frolicking about in the same pond of creativity and competence as the best of the best in your field.

Per psychology, moving from incompetence to competence has four stages. It is a skill anyone can acquire:

3. What is a good strategy for getting rid of a bad habit?

One definitive way to self-transformation is to write down the one habit you wish to drop and make a deliberate effort to do so over the next forty days. Whether you are building a new habit or dropping an existing one, the amount of effort and time required is roughly the same.

So, don’t start both at the same time. Either resolve to shed an existing one or take the time out to build a new one, but not both concurrently. For each habit you renounce, a bit of the old you, the undesirable you, will disappear. And, for every new one you inculcate, a part of you will transform.

The art of breaking or modeling habits, however, requires willpower and the willingness to see the world (and yourself) differently, which leads me to a second point.

You can read more about this second point and more on breaking the habit of being yourself in the Bondage of Beliefs.

4. What are the 3 golden rules of building new habits?

When you want to build a new habit, expect no results in the beginning. If you are serious about mastering a new skill, just keep inching towards your goal. One step at a time. Let me share with you the three golden rules of building any new habit:

2. Patience: Patience is the key. It becomes much easier to be patient if you don’t have unreasonable expectations from yourself.

3. Focus: By focus, I mean a sort of mindfulness. If you are practicing patiently, chances are you are focusing anyway. If you want long-lasting results from your practice, however, you have to be mindful.

There’s more if you want to know How to Build a New Habit: the story of the astounding Chinese Bamboo.

5. How do I root out bad habits from my life forever?

Be it breaking a habit or creating a habit, the key is baby steps. When we keep only the things that matter and root out the rest, we experience a sense of lightness in our being.

The video below talks about how to change our habits, and how we are made up of habits.


Login with Email
No Account? Create One
Yoga: The Life-Changing Tradition of the Gods
Reincarnation: The Journey and Reality

The community is here to help you with your spiritual discovery & progress. Be kind & truthful! Some pointers to get good answers: