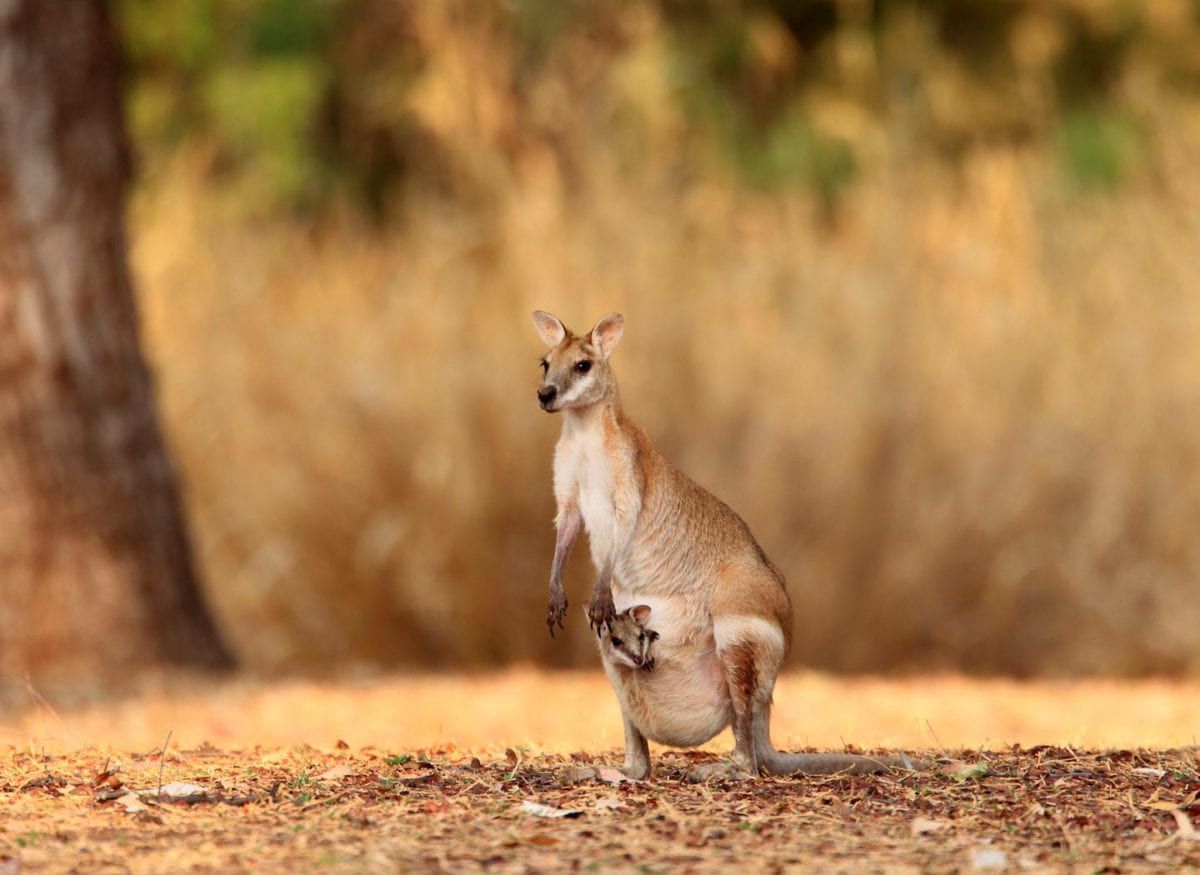 What's a wallaby doing here? Read till the end.

Akbar and Birbal were once taking a stroll in disguise. Roaming around incognito to experience the ground reality of his people was something Akbar did routinely. At a distance, Akbar saw a woodcutter drinking water from a well.

“How do you think this woodcutter feels about me?” Akbar asked Birbal.
“Exactly the same way you feel about him, Your Majesty.”
“That’s the most ridiculous thing I’ve heard in a long time! How can a mere subject of my kingdom think of me, his emperor, the same way I think about him?”
“Well, Jahanpanah,” said Birbal, “Feelings don’t think. They merely reciprocate. What he thinks of you may be different but what he feels about you will be exactly how you feel about him.”
“Prove it or you’ll be punished for comparing royalty with an ordinary citizen.”

At Birbal’s bidding, Akbar hid behind a tree and whispered degrading and derogatory things about the woodcutter. Deep in his gut, he mustered all the hatred and repulsiveness he could for the stranger. This rascal, a mere woodcutter, is a burden on the state. Look at how sweaty and ugly he looks. People like him are draining my resources. They are useless and live off governmental benefits. I am certain he sought no permission from the forest officer and chopped wood to only sell in the grey market. This man should be hanged. Meanwhile, the woodcutter resumed his journey and came this way.

“Oh my God!” Birbal exclaimed and ran towards him. “Have you heard that our king died of a snake bite today? I’m devastated.”
“Devastated!” the woodcutter said, throwing his load on the ground in excitement. “Good riddance, I say! He was not a king but a tyrant. Did that idiot ever do anything other than gratify himself all day? Just music, arts and women! You can’t run a country like that. Wish this czar was dead long ago!”

Once the woodcutter left, Birbal asked Akbar to whisper and contemplate on good and loving thoughts towards another person, an old woman, who was coming their way. Once again, the king took position behind the tree and looked at the old lady who was carrying a small bundle of hay. What a nice and calm looking person! She looks so much like my nanny who took care of me when I was younger. My state must do more for old people. I’ll order a countrywide raise in pension and medical benefits. No one of her age should have to toil like this. I’ll accord special status to senior citizens.

“Did you hear, Mata ji,” Birbal said to the old woman, “that our king died of a snake bite this morning? I’m heartbroken.”
“This can’t be true!” she said, sitting on the ground and lamenting. “Finally, India had a king who was courageous, kind and farsighted and God has taken him away! He was not just an emperor of Hindustan but a ruler of our hearts. What will happen to this nation now? Hindu and Muslim were like his two eyes. I wish Death took away this old body instead!”

I suppose this puts a new spin on the statement: “the feeling is mutual,” and I find it one of the most fascinating aspects of our existence that we can make someone feel about us a certain way just by thinking and feeling about them in a particular manner. Come to think of it, I don’t think it’s anymore a wonder then that when two people don’t get along, their relationship gets worse with time unless they take steps to reflect on the positives in the other person.

Call it the law of attraction or anything else, it is quite simple at the end of the day: whatever we focus on gets magnified in our lives. Whether it be the joy of a good meal or the hurt from stubbing your toe, when you draw your attention to something, your entire being begins to throb with reciprocal feelings. That’s why negative people always find everything around them crumbling and deteriorating. According to them the world is going down, the society is becoming immoral, the youth of today are good-for-nothing etc. As Goswami Tulsidas wrote, jaaki rahi bhavana jaisi prabhu murat dekhi tin taisi, you see the world and divinity around you based on how you feel inside. Clean your windowpane and all outside will appear clean too.

It is for this reason that all spiritual teachings, across all the religions of the world, repeatedly remind us to shun our feelings of hatred, jealousy, anger and so on. Nurturing these emotions in our hearts is not the way to inner peace and joy. Besides, feelings are highly contagious. Without a word or touch, they affect you and everyone else in your mental or physical proximity. Perhaps that’s why satsang, a congregation of like-minded people gathered to talk and spread goodness, has been stressed upon a great deal. Whether Christianity discovered it in church, Buddha in sangha, Sanatana Dharma in saints, is immaterial. What matters is the understanding that my feelings towards others are vastly responsible for how others feel about me. In case you haven’t noticed, it’s hard to feel good about yourself if others are not feeling good about you. If you wish to change how others see you, change how you see them first.

Kneeling in the confessional, the girl said, “Bless me, Father, for I have sinned.”
“What is it, child?” the priest asked.
“I have committed the sin of vanity, Father. Numerous times a day, I gaze upon myself in the mirror and tell myself how gorgeous I am.
“The priest turned, took a good look at the girl, and said, “I have good news for you, my child. That isn’t a sin… it’s merely a mistake.”

Everything we see around us is usually not how things actually are but how we choose to interpret them. You don’t have to win any race if you are not competing in it. You don’t have to face defeat and bite the dust if you are not fighting any battle. The desire to prove the other person wrong or to one-up them has never made anyone look superior. It is a sign of sheer ignorance. You could resist everyone who disagrees with you or you could have an open heart and welcome others in your life, the choice is yours. You could see the world with a hostile attitude or you could practice, siyaram maya sab jag jaani karhu pranam jorhi juga pani (everything and everyone is God and therefore I fold my hands and offer my respects), it’s entirely up to you. What you choose will promptly set the course of your life.

Feelings are like putting on a perfume. You don’t see the fragrance but you know it’s there. Others who come in your contact also experience the waft you carry about you. There’s little sense in spraying that perfume on your clothes, you need to apply it on your pulse points. Similarly, there’s hardly any merit in merely seasoning your personality with feelings, you need to get under your skin. In other words, an external display of emotions is not the same as feeling those sentiments inside you. An act won’t last long. True feelings will. And, how to evoke goodness and other kind emotions? Well, open up. A closed bottle does not emit any scent.

I also have an announcement for you I’d like to begin with a quote by Margaret Mead: “Never doubt that a small group of thoughtful, committed, citizens can change the world. Indeed, it is the only thing that ever has.”

I’m pleased to share that a small group of committed people have come together to build a full Black Lotus chapter in Sydney. To that effect, they’ve pooled in their resources and Black Lotus Peace Foundation Australia has acquired a piece of land measuring 80-acres where we’ll build a place for people to meditate, retreat and enjoy the bliss of solitude. The day I’d gone to see the land, a wallaby was hopping about near one of the two ponds on the property. It was a heart-warming and delightful sight. Quite symbolic of the auspiciousness of starting the Australian chapter. We’ll run spiritual programs for youths and other seekers to make our world a better place. For those of you who expressed an interest (at the Sydney meditation camp) to be associated with the chapter, I’ll share more details (including Sydney contacts) in due course.

Peace.
Swami
P.S. See you live tomorrow in my Swaminar. You can join it using the Black Lotus app.

Politeness Versus Humility
The Opposite of Kindness