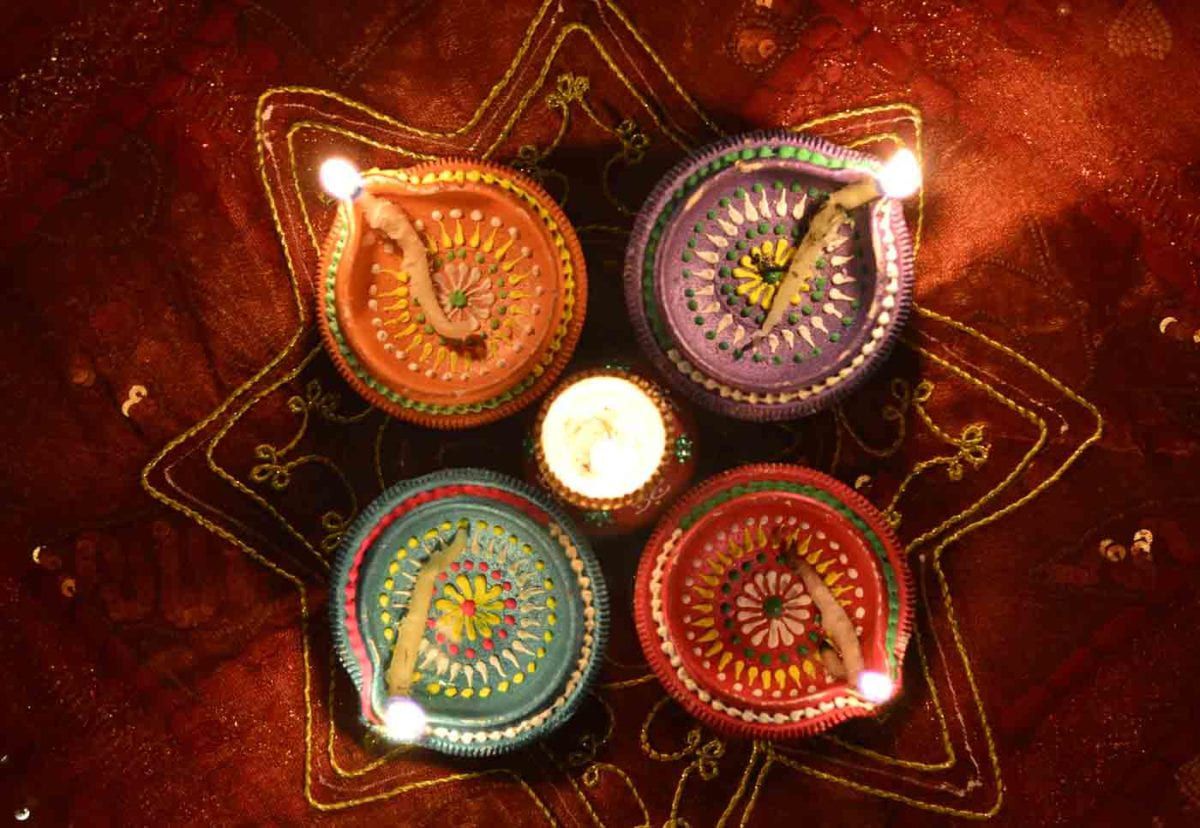 The Esoteric Meaning of Diwali

Why do we celebrate Diwali? Here's the esoteric meaning of the festival of lights and a beautiful excerpt from the Tulsi Ramayana.

I wish you all a Happy Diwali (Oct 26), one day in advance so you can enjoy two days of peace, light, and celebrations! Among other legends, across various religions, Diwali stands for celebrating Lord Rama’s return, along with Mā Sita and Lakshmana, to Ayodhaya after eliminating the asura, Ravana.

For thousands of years, it has been celebrated like that. For any saguṇa upāsaka (worshiper of a form) or followers of the Hindu religion, the story is historical and not mythological. For such a devotee, there may be whatever hidden meaning to it all but it stands irrelevant, for, bhakti and cogitation cannot coexist.

Devotional service does not require that your devotion be supported by any underlying logic. Devotional mood, bhāva, is designed to lead the individual past buddhi, intellect. For, the true nature of the mind is beyond all reasoning and cogitation, both of which are products of the conditioned mind. However, a yogi sees things differently. He believes there must be more to it than meets the eye. After all, the scriptures were propounded and expounded by the greatest mystics and timeless sages.

So, what is the esoteric or yogic meaning of the Rāmāyaṇa — the epic of Lord Rama? I am in no way qualified to even attempt deciphering the esoteric meaning. In fact, even the thought is arrogant for how can a drop comprehend the depths of an ocean? Unless, of course, he merges into the ocean and becomes the ocean himself. But once the ocean, he can no longer understand the state and struggle of the drop! Anyway, I am sharing with you what I found in my samādhi one day. As follows:

Ravana was a daitya, a demon, with ten heads and limitless power. He had the elixir stored in his nābhi, navel. Lord Rama, an incarnation of Vishnu, was an icon for the strength of character and dharma, the righteous path. His Consort, Mā Sita, was an embodiment of devotion and pativrata dharma, her conduct of faithfulness and loyalty towards her Lord. Lakshmana represented sevā, service, determination and resolve. So much for the basic premise…

Rāvaṇa a great tapasvin, represents the attainment of supreme one pointed concentration. His ten heads are but the ten senses — conative and cognitive organs. It shows when the senses are one-pointed (channelized consciousness) but misdirected, one wrongly uses one’s power. There is no hope for the yogi who has attained such a state of mind but is still a servant of his lust and rage. That yogin who stops just after perfecting the yogic practices rather than the actual samādhi, trance, can still fall to vikāra, the restive tendencies of the mind. And the one who fails to carry out a penetrating analysis into the reality of things in his trance will continue to be a regular victim of such tendencies.

For, the real work begins once you get to samādhi and are able to maintain it. The elixir in the navel hints at the yogic secret and importance of the maṇipur chakra, the psychoneurotic plexus of navel.

Śrī Rāma represents the samādhistha purῡśa (the adept firmly established in his tranquil equipoise). But he goes further, he treads the path of dharma and compassion. Consequently, he is not confused about right from wrong. Mā Sītā, represents the purity and power of prakriti (Nature) and the feminine aspect, kuṇdalinī.

It shows when the yogi is as accomplished as Rama, Nature surrenders to such a man and becomes his devotee. And misdirected senses (Ravana) fail to lure such a devotee. Lakshmana shows the need for resolve for the yogi. Lakshmana was a master of sleep and lust and lived an austere life for fourteen years. The path of yoga requires control and discipline. The fourteen years indicate an average timeframe to attain supreme enlightenment.

So, to succeed on the path of yoga, one needs to have the dharma and maryādā (moral and righteous conduct of speech, action and thoughts) of Rama, the tyāga (detachment and dispassion) of Lakshmana and the purity of Sita. Victory is not far for such a seeker.

I am reminded of a few couplets from the epic. Please refer to the Rāmcaritmāṇasa for the exact version. The one below is from memory, so may have minor errors.

Translation:
Vibhishana asks the Lord, “O Master! You have no chariot, no mail, nor even footwear. How are you going to win against the great warrior Ravana?”

Says Rama, the Ocean of Grace, “Pay attention dear, the chariot required to win is of a different type:

Valour and perseverance are the wheels of the chariot. Truth and character comprise the pole and the winning emblem. Strength, discerning wisdom, self-control and the benefit of others are the steeds. Forgiveness, compassion, and evenness are the reins. Devotional service to your Ishta is the charioteer. Indifference is the mail and contentment is the sword. Charity is the axe and intellect is the power (śakti— the bolt). Knowledge is the strong bow.

A still and pure mind is the quiver and self-control, control of the senses, and discipline are the various arrows. Worship of the Guru and the learned is the impenetrable armor. There is not another method of winning as powerful as this. The one who has a chariot of such dharma, let alone any worries of winning or losing, there will, in fact, be no enemies left for him to conquer. The one who stays firm on such a chariot can even win against the most formidable foe — this world (the attractions of the material world).”

Once again I wish you a safe and happy Diwali. Ride the chariot with grace!

Please take care of yourselves and each other.

54 comments on this post. Please login to view member comments and participate in the discussion.

The DNA of Desires
Life is Like a Musical Instrument