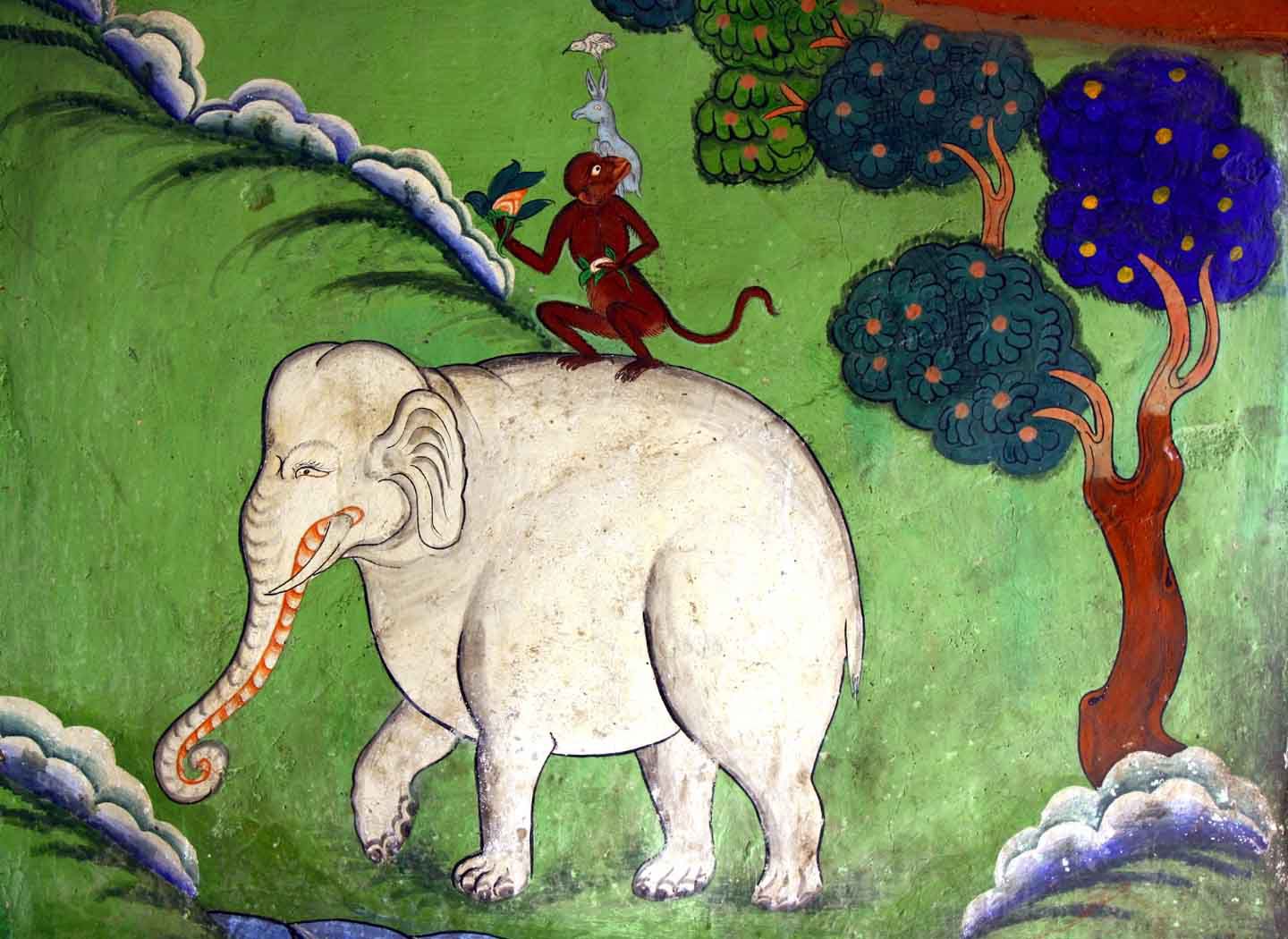 The nine stages of mahamudra are identical to the nine states of attention elucidated in my last post. The more I meet aspiring yogis or serious meditators, the more I realize how great the misconceptions are about meditation. What really pains my heart is that most of the time, the seeker is not at fault. It’s the teacher, the guru.

Most aspirants are often being guided by teachers who can’t demonstrate anything. These teachers never went into the depths of meditation themselves but simply mastered some theoretical material and are now guiding others based on second-hand knowledge. Today, I’ll briefly touch upon the nine stages of tranquility and also answer the question we raised two weeks ago: “How great an effort is required to reach the final state?” 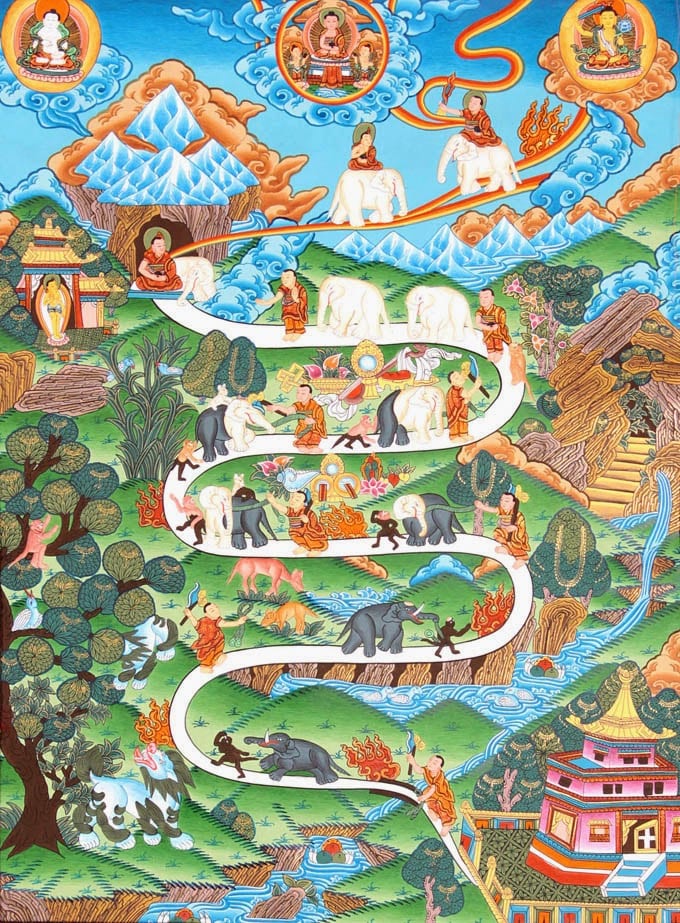 If you carefully examine the picture in the post today, you’ll find three key artifacts, namely, a monk, an elephant and a monkey. Additionally, the monk is holding a noose and a goad. The monk represents the meditator treading the windy path of meditation, where, until it’s mastered, no two days are alike. Some days you experience good meditation and other times, it’s the opposite. The elephant represents dullness and the monkey restlessness. The goad and noose represent vigilance and attentiveness in meditation.

In the first stage, the meditator is like a rocky boat in a turbulent ocean. There’s virtually no control over the mind. Concentration at this stage ends up wherever the drift of thoughts takes it. The monkey and the elephant constantly disrupt the meditation and the meditator struggles to tame them.

In the second stage, there’s a small white patch on the elephant and the monkey. It shows progress. It means the meditator is able to have short periods of quality meditation when the mind is devoid of thoughts. Think of a flag that flutters whenever the wind blows. No wind no fluttering. Similarly, the mind at this stage is stable for a short period before the winds of thoughts start to blow again causing waves in the stillness of consciousness.

A persistent meditator gets to the third stage, and this is significant progress in its own right. Now, they are able to detect the dullness arising in their meditation. In the scroll, it is shown by a bigger white patch on the elephant and a noose leashing it. Restlessness or stray thoughts are still a great challenge at this stage.

In the fourth and fifth stages, while the meditator makes a giant leap by even greater taming of restlessness and dullness, a new challenge presents itself. You’ll see a rabbit riding the elephant now. This signifies a state of calmness which makes the meditator go into a sort of torpor or laxity. Often, most meditators who get even a tiny glimpse of this calmness, mistake this as the ultimate state of bliss.

In the sixth stage, the monk can be seen leading both the monkey and the elephant, but the animals are not fully white yet. It means the meditator has mostly tamed them, he’s able to lead them, but, there are still subtle elements of excitement or stupor that can distract the meditator.

The elephant is completely white and the monkey sits by the feet of the practitioner in the seventh stage. It shows that the meditator has nearly perfected the art of attention. They experience lucid awareness during the meditation but the presence of the monkey shows there’s still a chance of feeling excited or restless. Think of a still pond where dropping even a tiny pebble into it causes ripples.

In the eighth stage, there’s no monkey. Restlessness has completely disappeared for this meditator and a constant state of bliss leaves them calm. But, sometimes in this state of bliss, the lucidity of their awareness is adversely affected. Think of someone under the influence of a mild intoxicant. At this stage, the meditator hasn’t yet learned to rise above the bliss.

In the ninth stage, the monk is sitting down with the white elephant. Bliss has become a close companion and it no longer interferes with any worldly activity. All mental and emotional battles cease, the war of thoughts stops and there’s virtually no effort in meditation now. The meditator has become meditation.

Can anyone reach this state? Yes. What’s required? Willingness, persistence, and time; undying willingness, unrelenting persistence and a lot of time. Let me give you a broad guideline: 1500 hours of quality meditation is required to cross each stage.

With discipline and a quality effort, you can bring it down to about 1200 hours and with the right initiation and guidance, it can be brought down to 800 hours for each stage.

So, who can initiate and who can guide you? How to know the person across the table is not just a smooth talker or even a charlatan but a genuine practitioner? For another time.