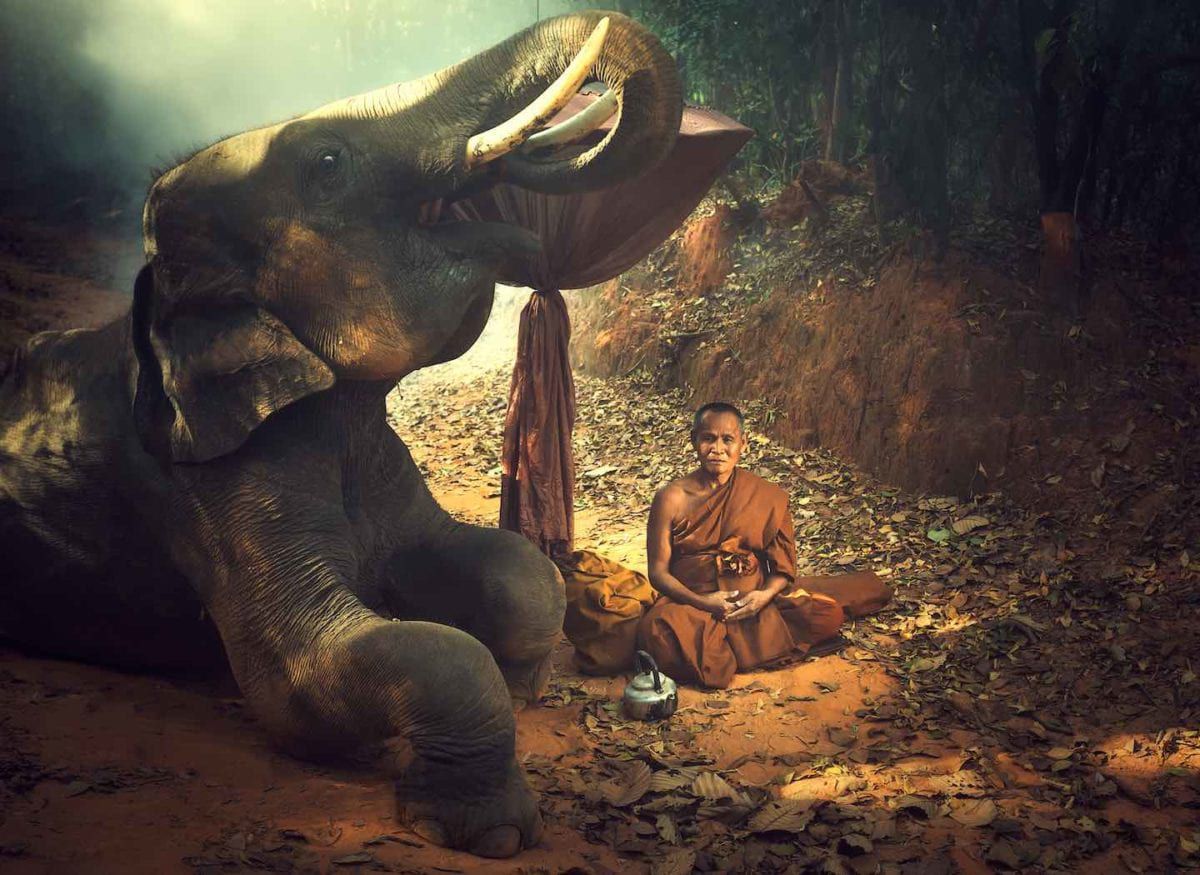 What to do when the wild elephant of thoughts tears into your garden of peace and quiet?

Has it ever happened to you that you are unable to shake off a certain thought or feeling? In fact, it happens to most of us more frequently than we might care to count. Everything is going fine and then out of the blue, some negative thought runs amok in our mind like an elephant gone wild razing our peace and calm in practically no time.

We sit there wondering why I’m feeling like this or that I don’t want to think these thoughts or feel these things. Those thoughts that completely derail us while we helplessly watch our own destruction is a common scenario in every person’s life. During these moments, meditation, wisdom, affirmations etc. just go for a toss and only one thing rules the universe of our mind: a tearing thought.

Is there any method to handle a tearing thought, that gatecrasher who barges in our consciousness? Yes. That’s the good news. The bad news? It isn’t exactly a piece of cake. How do we rise above such thoughts then?
First, let me share with you a beautiful story I once cited in one of my discourses.

The Buddha once told a story about a young man who was a trader and had a beautiful wife and baby son. Sadly, his wife fell ill and died, and the man poured all his love into his little child, who became the sole source of his happiness and joy.

Once while he went away on business, bandits raided his village, burned it to the ground and captured his five-year-old son. When he returned and saw the devastation, he was beside himself with grief. He found the charred corpse of a small child, and in his desperation, he took it for the body of his son. He tore at his hair and beat his chest, and wept uncontrollably.

At last, he arranged a cremation ceremony, collected up the ashes, and put them in a very precious silk pouch. Whether he was working, sleeping or eating, he always carried that bag of ashes with him, and often he would sit alone and weep, for hours on end.

One day his son escaped from the bandits, and found his way home. It was midnight when he arrived at his father’s new house and knocked on the door. The man lay in bed, sobbing, the bag of ashes by his side.

“Who is it?” he asked.
The child answered, “It’s me, daddy, it’s your son. Open the door.”
In his anguish and confusion, all that the father could think of was that some malicious boy was playing a cruel trick on him.
“Go away,” he shouted, “leave me alone.” Then he started to cry once more.

Again and again, the boy knocked, but the father refused to let him in. Finally, he slowly turned and walked away. The father and son never saw one another ever again.

When he came to the end of his story, the Buddha said, “Sometime, somewhere you take something to be the truth. But if you cling to it too strongly, then even when the truth comes in person and knocks on your door, you will not open it.”
(Thich Nhat Hanh. Being Peace.)

There are two important aspects of a nagging thought that ruins our peace. First is the thought itself and second our overactive imagination. Dropping a thought is a practice in meditation that can be learned and cultivated. Once you master it, all you have to is to hold a mini self-dialog and gently shift your attention on something positive. Overactive imagination, on the other hand, is more like a spiritual disorder. It’s similar to excessive or compulsive thinking. When we start to imagine stuff, the thought starts to inflate like a balloon and takes up our entire mind. Soon, the only thing we see, think, hear, observe is everything linked to that thought. And even when something is not connected, your mind will just link it anyway. That becomes our truth. It starts to govern our attitude and behavior towards everything in life. Fears, phobias, anxiety and other noxious emotions fill our mind.

Lingering thoughts and feelings usually come in waves. Where an average person is constantly tossed about, a good meditator learns to surf these waves. The first thing about a tearing thought is to recognize it the moment it appears. Without such mindfulness, it is impossible to move away from that thought and shift our attention elsewhere. I would like to add that I didn’t coin this insightful term: tearing thought. I first came across it in The Yoga of Kashmir Shaivism by Swami Shankarananda. Here’s what he writes about these thoughts:

I often refer to tearing thoughts. These are thoughts that attack us, like “I am weak. I am worthless. I am no good. That-other person is better than I am”. Tearing thoughts are an extraordinary psychological phenomenon. When cells take the wrong path and start to attack the organ they live in, we call it cancer. Tearing thoughts are a kind of autoimmune failure of the mental body.

The mind, which should be used for our benefit – solving problems, understanding issues, writing poetry – instead turns against us with devastating effect. Enemies are insignificant when our own minds tear into us.

If there is a single phenomenon that epitomizes being deluded by your own energies, it is tearing thoughts. A tearing thought is a terrorist who has already penetrated your deepest defense system and lives in your hometown with vile intentions. If you could stop this one tendency you would be entirely transformed. When we have a failure in life, it is not so much the defeat that brings us down, but what we take it to mean about ourselves. We say, ‘Oh I lost that game, therefore I’m worthless’. We have a tantrum, we take to our bed, we make everyone suffer for miles around. The one who suffers most is us. If we didn’t have tearing thoughts, we would simply say, “Now what can I learn from that? That’s good, I’ll do that next time”. And we move on cleanly and clearly.

If you are successful in some aspect- of your life and if you examine your inner process, you will discover that you are not afflicted by tearing thoughts in that area. We defeat ourselves by getting caught in the pernicious downward spiral of tearing thoughts.

(Swami Shankarananda. The Yoga of Kashmir Shaivism: Consciousness is Everything.)

When we accept the cyclical nature of our life and thoughts, we ease up a bit. We start to realize that not everything in life can happen the way I want. Not all my dreams will come true. That universe has its own plans too. Once we get a handle on it, the rest is as easy as rocket science. Here’s my personal recipe of life that will help you keeping tearing thoughts at bay. Consume it daily and share it with others. As follows: 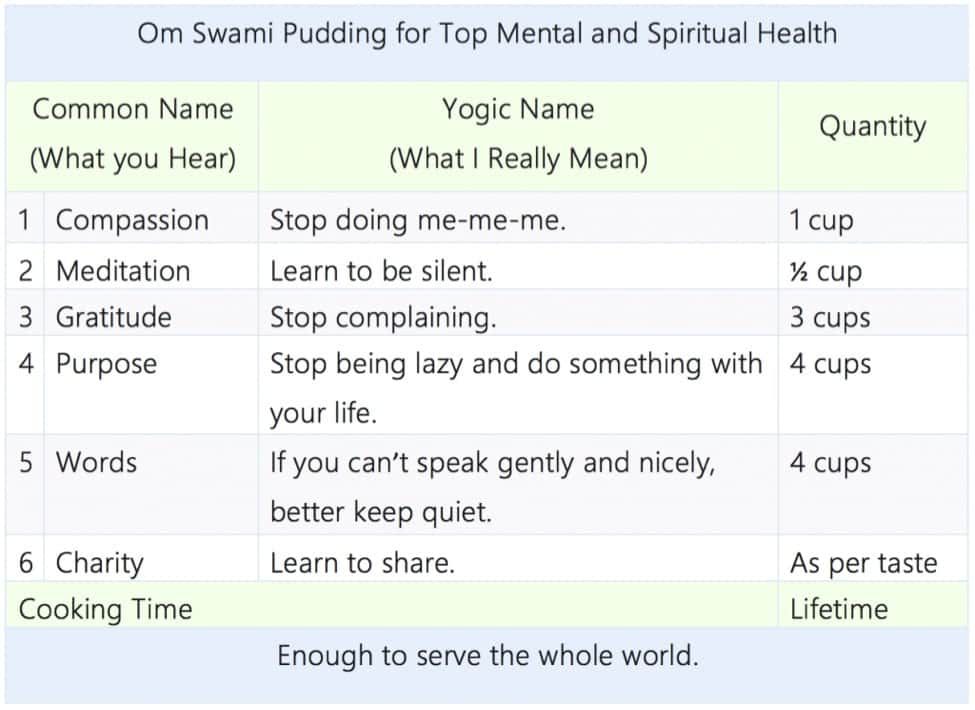 There’s no one singular prayer, meditation or method that can help you keep your mind at peace under all circumstances. Life must be savored the way it comes. There are some things we can change but a lot of it is about our attitude towards life which dictates our behavior and choice of words in any situation. And attitude, in turn, is determined by our mindset and beliefs. Mindset can be changed with meditation, wisdom and inspiration. Beliefs can be changed with education, experience and insight.

In the dead of night, a man had to pass through a cemetery. Much to his horror and awe, he heard music coming out of a grave. Someone was playing a famous symphony of Mozart backwards. Shocked, he picked up speed to get out of there but ran into the caretaker.

“Good lord!” the man stuttered in fear. “That grave…that grave…I hear music coming out of that grave.”
“Any surprise?” the caretaker said. “That’s Mozart’s buried right there!”
“So, his spirit is playing reverse piano or something? This is so spooky.”
“Take it easy, man,” the caretaker replied. “He’s just decomposing.”

If you feed your mind and heart with noble thoughts and feelings, your mindset and beliefs will turn noble automatically. This leads to a transformation of one’s attitude. Six ingredients of the divine pudding will easily subdue a pinch of tearing thought. Garnish it with a smile.

The Right to Dream
The Spirit of Service