How Good a Meditator Are You? 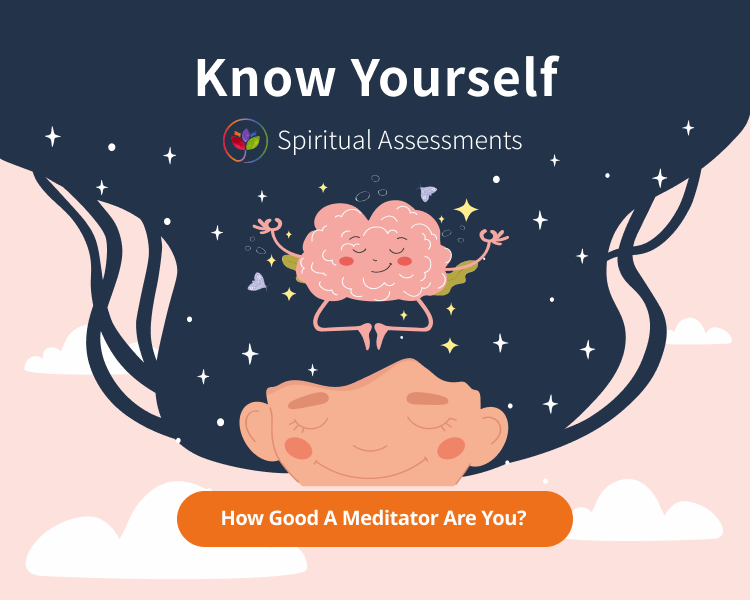 How an expert meditator controls brain waves at his will.

Ability to “Focus” & “Relax” at will – a scientific observation!

Peer-reviewed scientific research on the expert meditator Om Swami’s brain reveals that intense meditation gives the ability to control and create brain waves voluntarily, at will. He also demonstrated these fluctuations during both relaxation and focus activities. These unique findings can bring innovative additions to treating anxiety, stress, and depression.

Advanced meditation led to peak concentration, a constant state of internal bliss, and unique brain patterns in this expert meditator.

Using Quantitative EEG, researchers investigated the brain waves of Om Swami. This self-realized Himalayan monk reached the summit of meditation by attaining a permanent meditative state in 2011. His profound meditative state is always present, whether he meditates, focuses, relaxes, or works.

An analysis of his brain regions, when compared to average and non-meditators, revealed significant differences in alpha and theta waves. Theta waves are our gateway into the subconscious mind, whereby we can tap into our infinite potential. The unique level of self-control in Om Swami and his ability as a meditator to control his brain waves during the assigned tasks were recorded and published.

The findings reveal that intense meditation improves attention span and focus and increases relaxation states in meditators. If we could relax and choose to align our minds and actions, our stress levels would also reduce. Similarly, a sharper focus at will, will lead to increased productivity and enhanced well-being.

Meditation has been used for cognitive enhancement, rehabilitation, and stress reduction. The findings of this EEG-based Quantitative Analysis study now suggest that meditation could be used as an effective tool in cases of impaired mental processing, such as reduced memory, focus, and thinking skills.

These claims are supported by the discovery that meditating can alter brain waves in a significant and stable manner. The study was carried out over a period of four years. The aforementioned study titled “An EEG based Quantitative Analysis of Absorbed Meditative State” was published in 9th International IEEE/EMBS Conference on Neural Engineering (NER).

Consisting of a team of engineers, the researchers recorded the brain waves of Om Swami, who has 18000 hours of quality meditation experience. This research aimed to unravel whether scientific evidence supports meditation as a potential tool to develop particular abilities, including memory, focus, and creativity.

“The monotony and solitude of a quiet life stimulate the creative mind” – Albert Einstein.

And today, advanced scientific research on the impact of a quiet life and quiet mind proves that Einstein was right. Usually, regular individuals may struggle to relate to expert meditators. They may not understand how these significant changes in brain activities could apply to individuals in a work and office environment. But unlike other research about meditative states, in this study, the expert meditator is an unconventional monk. He also spends several hours working at a desk and interacting with many people.

Understanding the brain and its waves

The more transmitter chemicals there are, the stronger your wave will be, this is also known as synchrony. The five types of detectable brain waves, delta, beta, alpha and gamma waves can usually be identified using an electroencephalogram commonly known as an EEG.

EEG reports help us analyze the brain and its activities, including any abnormal activities. There are five basic detectable brain waves, each with a different range of frequency and are described in more depth here.

Brain waves do not occur across the entire brain equally and an EEG only detects activity at the surface of the brain. The strength of the brain waves vary across different areas of the brain.

In research, there is a 10-20 Electrode System used to measure these brain waves – a method which is now internationally recognized. This system refers to the placement of electrodes (in an arrangement similar to that of a shower cap) on the brain prior to the readings being taken. The 10-20 Electrode system was also used in this study on Om Swami’s brain. 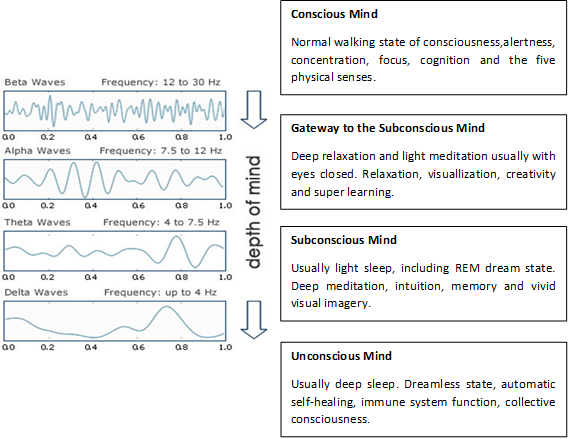 Did you know that about 40-45% of the world’s population has abnormal brainwaves?

This means that almost half of the world face issues with focus, concentration, depression and anxiety due to their brain waves. Ideally, normal humans have a variation of beta, alpha, theta and gamma brain waves. It is understandable that those who suffer from mental health fluctuations due to brain wave related issues actively look for treatment options to improve their health.

Delta waves suspend external awareness and usually occur in deep sleep. It’s the slowest detectable wave of the brain which is around 0.1 to 4 Hertz.

As the delta waves increase in our brain, we lose the understanding of physical reality. Individuals may choose to reduce their delta activity if they require a more active brain to perform better or in cases of ADHD, the preferred choice may be to increase delta activity to promote relaxation of the brain.

Theta brain waves are the doorway between the conscious and subconscious mind. These waves usually occur in sleep and are dominant when meditating.

Through theta brain waves, you can access information beyond your normal conscious awareness and can easily tap into your subconscious mind to manifest things in your life. Influx of good ideas and the state of flow occur in the theta state, which is a very positive state.

Outdoor runners when in a state of mental relaxation, slower than alpha but awake, hence in theta, are prone to a flow of ideas. The theta state can be triggered in the meditative state as proven scientifically below. Theta brain waves can be extremely beneficial as they increase our productivity, creativity, imagination, intuition, decision making skills as well as awakening our sense of purpose.

Alpha is the middle wave, between theta brain waves and beta brain waves, and can be described as a wakeful resting state for the brain.

Beta waves are the most active brain wave during our normal waking state. They are one of the fastest brain waves detected through EEG. Beta waves are dominant when our consciousness and attention are directed towards cognitive tasks and the outside world. Beta waves are associated with normal mental activity such as problem solving, critical thinking, writing, mathematics and also right now! Yes, beta waves are prominent within your brain while you are reading this article! Amazing, right?

But unfortunately high beta activity is also the cause for stress, anxiety and an overactive brain leading to over-thinking. Ideally states of low and moderate beta are most beneficial for optimized mental performance.

Gamma waves have the highest frequency and are thought to be related to our cognitive functions. They are associated with a strong mental focus and concentration, higher functioning of the nervous system, such as memory, or cognition.

The neuroscience team who carried out the study on Om Swami’s brain believe gamma waves can link all the parts of the brain with one another. High gamma wave activity has been reported in expert meditators, but theta brain waves are also prominent in the brain of intense meditators as shown below.

Any data collected, which consists of gamma wave interpretation, may be contaminated by muscular contractions especially of eye movements such as saccades which increase the frequency spectrum (brainwave frequency) by up to 5 times, hence leading to the erroneous conclusion based on increased gamma brain waves detection.

However, this situation can be avoided by maintaining a still gaze throughout the experiment. It is therefore cautious to avoid strong conclusions regarding brain activity based on gamma rhythms alone, unless eye movement is controlled and restricted. In the current study on Om Swami, gamma waves as well as beta waves were detected while the task involved fixed gaze at a screen [RDOT, a task described in the next section].

How does meditation affect brain waves? What’s the impact on the brain?

The 2019 study about the impact of meditation on brain waves (or electrical activity), consisted of an experiment on three categories of individuals, with Category A consisting of the expert meditator who can enter and exit the relaxed state of deep meditation (Samadhi) voluntarily, through self control.

The subjects across the three categories had different levels of experience. (Total: N= 11; Male; Age Range: 21 to 38 Years old).

This category had only one person, Om Swami (n= 1; Age: 38-year-old male). Om Swami is a Himalayan mystic with broad training and experience of Yoga (Experience: Twenty-five years of meditating and chanting mantras with focus).

During the experience Om Swami went into Samadhi stage (deep meditative absorption) which was recorded & studied.

2.     Category B – The moderate and regular meditators

This category was a control group consisting of five individuals (n= 5; Age: 21 to 30-year-old male) without any prior practice or exposure to meditation.

Task one and two:

Each participant across all three categories was asked to perform two visual tasks. They were required to be actively engaged through the entire study.

Task one – First, they were asked to sit Relaxed with Eyes Closed (REC).

Task two – Secondly, they were instructed to restfully gaze at a DOT on-screen (RDOT). The dot was a sensory input while the subjects were required to be intensely focused.

For ease of understanding, we will refer to REC as the ability to relax and RDOT as ability to focus. The study used EEG as a psychophysiological indicator and possibly as a neurofeedback for meditators.

The findings of the study

Presented in the figure below is the topological map of the EEG of all three categories of participants for sitting Relaxed with Eyes Closed (REC) exercise (or “ability to relax at will”). 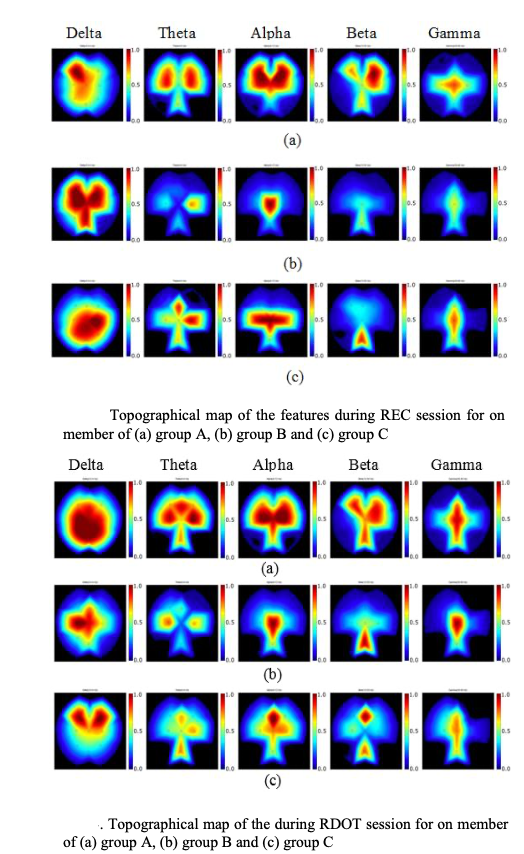 The observations based on the findings

During the RDOT task, Om Swami, entered into Samadhi. This occurrence was confirmed by the researchers and by Om Swami himself after the task was completed. The findings revealed very high levels of alpha and gamma waves in the central/parietal region during Samadhi (Figure of Om Swami’s EEG brain waves presented below).

The presence of these waves are an indicator of a relaxed alpha imposed with a high activity gamma on top. Parietal regions are responsible for tactile and other sensory coordination. This brain pattern observed in Om Swami indicated a high sensually stimulated but relaxed state. There was a significant difference with regards to this peculiar absorbed state, as other than in Om Swami (Category A), it wasn’t observed amongst other volunteers [meditators (Category B) and non-meditators (Category C)].

Additionally, based on the evidence gathered in this unique study, we can conclude that during Samadhi, all other regions of the cortex have lesser frequencies but the central and parietal regions have higher alpha and gamma brain waves.

Takeaways from the study on Om Swami’s brain

Intense meditation and mindfulness, as practiced by expert meditator Om Swami, can alter our brain physiology and enables us to control our brain waves at will. Meditation can positively impact an individual’s emotional, cognitive processes, mental wellbeing, as well as their attention and focussing skills.

This study confirms that a meditative practice can be used as a tool to help reduce anxiety, stress, over-thinking, and potentially reduce the impact of depression. The brain is malleable. Through the practice of regular exercises, such as mindfulness, aiming to enhance concentration, this brain, as an organ, can be changed physiologically in a positive and permanent way.