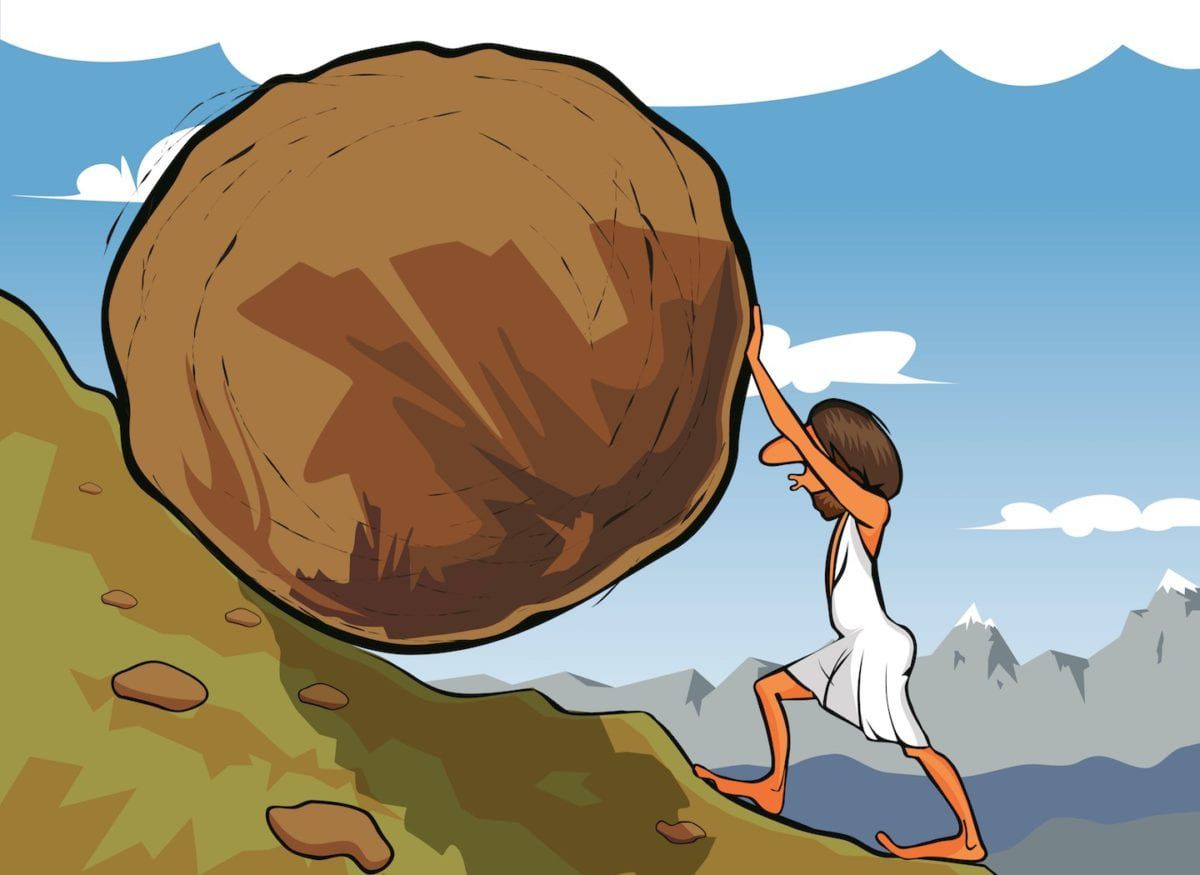 To make spiritual progress, we must get out of our own way or the boulder of emotions will keep rolling back.

We all have our quirks, things that make us tick or kick. Out of nowhere, our mood changes and negative thoughts run amok in our mind like raucous monkeys in a banana farm (try the visual, it’s fun). When we are good, we are so good that at times even we can’t believe our goodness, our large heartedness. And when we are bad, we can be so bad that the Satan might run for cover at our sight. We don’t want to think those things or feel that way, but we still do. Wonder why? I may just have the answer for you.

Ramakrishna Paramahansa often used to narrate a short story. There was a man running to board a crowded train that had already started chugging along. Yet, panting and puffing, carrying a heavy bag on his shoulders, he managed to get in even though all the seats were taken. A few minutes passed, the train was well on its way and he kept standing with his bag on his shoulders.

“You can put the bag down,” one of the co-passengers said.
“Why?” he scorned. “What’s it to you? This is my bag!”
“But you are on a train!” another said. “You can put it down rather than carrying the load!”

The man, however, wouldn’t let go of it and traveled the entire journey standing with his bag on his back.

Of course, he was being foolish and stubborn by not heeding the wise counsel. It’s not the story of just that man though. It’s our story. Each one of us is that man who is lugging around an excess baggage we could do without. No baggage is heavy if you don’t have to move or carry it. What happens to us in our life does not make our lives heavy but that we choose to not drop it or put it aside does.

Judith Sills in her bestseller Excess Baggage calls them our blind spots. We don’t recognize them even if we see them. Like an old piece of heavy furniture, they are in our way and we keep stubbing our toe. One of the classic signs of excess baggage is the firm belief that someone else or the other person is responsible for my misery. She beautifully differentiates how our behavior, beliefs and emotions create our excess baggage. I quote:

First on the behavioral level, our excess baggage includes, among other things, our habits – all those guilty pleasures, devastating attachments, and knee-jerk responses that endanger our health, interfere with our productivity and/or offend the people we’d most like to impress. An all-inclusive list is nearly impossible because part of the magic of being human is our capacity to generate an infinite number of bad habits.

On the cognitive level, excess baggage refers to any unexamined values, beliefs or assumptions that make you sadder, more anxious, more frightened, or generally weaker than you would otherwise have to be. Belief baggage is the frame you’ve outgrown, a personal motto that no longer serves its purpose.

For example, “Nice girls don’t talk about money” is a belief that worked perfectly well until nice girls joined the workforce and were matter-of-factly underpaid. Or take the belief “Men fix things” – a favorite of mine until my husband freed me of it. (Early in our marriage, the bathroom faucet had this irritating little drip. Finally I said: “You know, honey, the bathroom faucet has this little drip…” He unzipped his pants, pointed to himself, and said, “Judith, this does not make me a plumber.”)

Excess Baggage on the emotional level has to do with pieces of your past that interfere with pleasure and productivity in the present. These are old, powerful feelings that intrude on new situations. Our parents are the main focus of these feelings, especially their failings as parents and our own lingering disappointment or rage as a result of these failings. But an ex-spouse can generate an impressive amount of intrusive emotional baggage as well, as can siblings or other family members.

The source of all kinds of excess baggage is a consistent personality style. Given our individual personalities, we are more likely to have one or another kind of baggage… Our greatest weaknesses grow directly out of greatest strengths.

Here are the five psychological traits of excess baggage that are usually governed by ruling passions. Under each trait, there’s a sentence in italics (taken from the same book by Judith along with headings) which shows how it’s both our strength and weakness. That awareness of when a particular trait of your personality is taking over your life is at the heart of first recognizing your baggage and then dropping it. With mindfulness, if we tame the underlying ruling passion, all symptoms of the trait will go away on their own.

These traits are not necessarily good or bad (for that is always relative). It’s just that they create baggage that often prohibits us from living and enjoying our life fully. Without further ado, here: (feel free to identify your trait, I’m not looking…)

Control is the ruling passion at the heart of this trait so you come across as competent, capable, responsible and so on. You may even take pride in calling yourself a “perfectionist”. You have to finish what you start. Even if it’s the most boring book you are reading, you’ll finish it just because you started it. You must do your research before you make any purchase because you have the urge to ensure that you made the smartest decision. You could easily be a workaholic and then justify your erratic work habits by pointing to your role and responsibilities etc. The hardest thing for you is to give in by leaving anything unfinished.

When something is important, you’ll do the best job possible. But, even when it doesn’t matter, you still need to do it “right”.

Self-esteem is the ruling passion behind the need to feel superior. I’ve observed that the less you believe in yourself, the lower your self-esteem (irrespective of what you may demonstrate to the contrary in public). And the lower your self-esteem, the greater your urge to exhibit your superiority. A superstar won’t hesitate to walk the red carpet without a single piece of jewelry on her person, in plain clothes, but a struggler feels the urge to draw attention somehow with gestures, wardrobe, and words, for example.

When you are a person of substance, you are already superior. It’s the empty vessel that makes much noise. If you go shopping, you want to buy the best out there. You consider yourself too picky and the one thing you dread is to look foolish.

Superiority is a magic high, a giant enjoyable ego inflation. But, it leaves you vulnerable to the crash of jealousy, envy, and inferiority.

Security is the ruling passion beneath the fear of rejection. You try to be too nice to everyone because you can’t bear the idea of being rejected by anyone. You could easily be a codependent. In trying to be nice, you become too giving, even a martyr. The trouble with this approach, however, is that you also expect a lot in return.

You feel you are doing so much for others not by choice but because you care about them and they should, therefore, acknowledge it and lead their lives according to you. They, on the other hand, think you are doing it out of love or because you want to. You need constant approval, appreciation, and acceptance. So much so, you may even have trouble believing compliments being showered at you. Deep inside you believe that you are too nice and that you are only trying to help. You like to avoid social gatherings and parties.

You are enormously giving but you charge a high price for it.

Attachment is the ruling passion of this trait. You dream of getting a standing ovation. While speaking to your partner, many of your sentences begin with, “If you loved me then you would know xyz…or do abc…or I wouldn’t have to tell you and so on.” Your core belief in love is that if you have to ask for it, it’s not worth it. You want to belong to someone but you also want someone to be madly in love with you (read need you) so that your world is complete.

Feelings are very important to you as you are quite an emotional person. Your first defense is that you can’t help how you feel. You dread routine and dream of a dramatic life.

You are both perceptive and intuitive. But, you overreact to the information you sense. Your ideal gift is a surprise public demonstration of how much you are loved.

Justice is the ruling passion in cherishing rage. You relish the thought that those who wronged you are punished in some way. You may not intentionally will them any harm but you want them to realize their mistake. If you have to go to a party, you want to know if the person you loathe is also invited in which case you would rather pass. You are known to give it back right then and there.

Once you form an opinion about someone, you find it very hard to change. Offense is the best defense and you find it the hardest to forgive or forget.

Interestingly, narcissists consistently show all five traits in varying degrees – they have certainly won the jackpot, it seems. 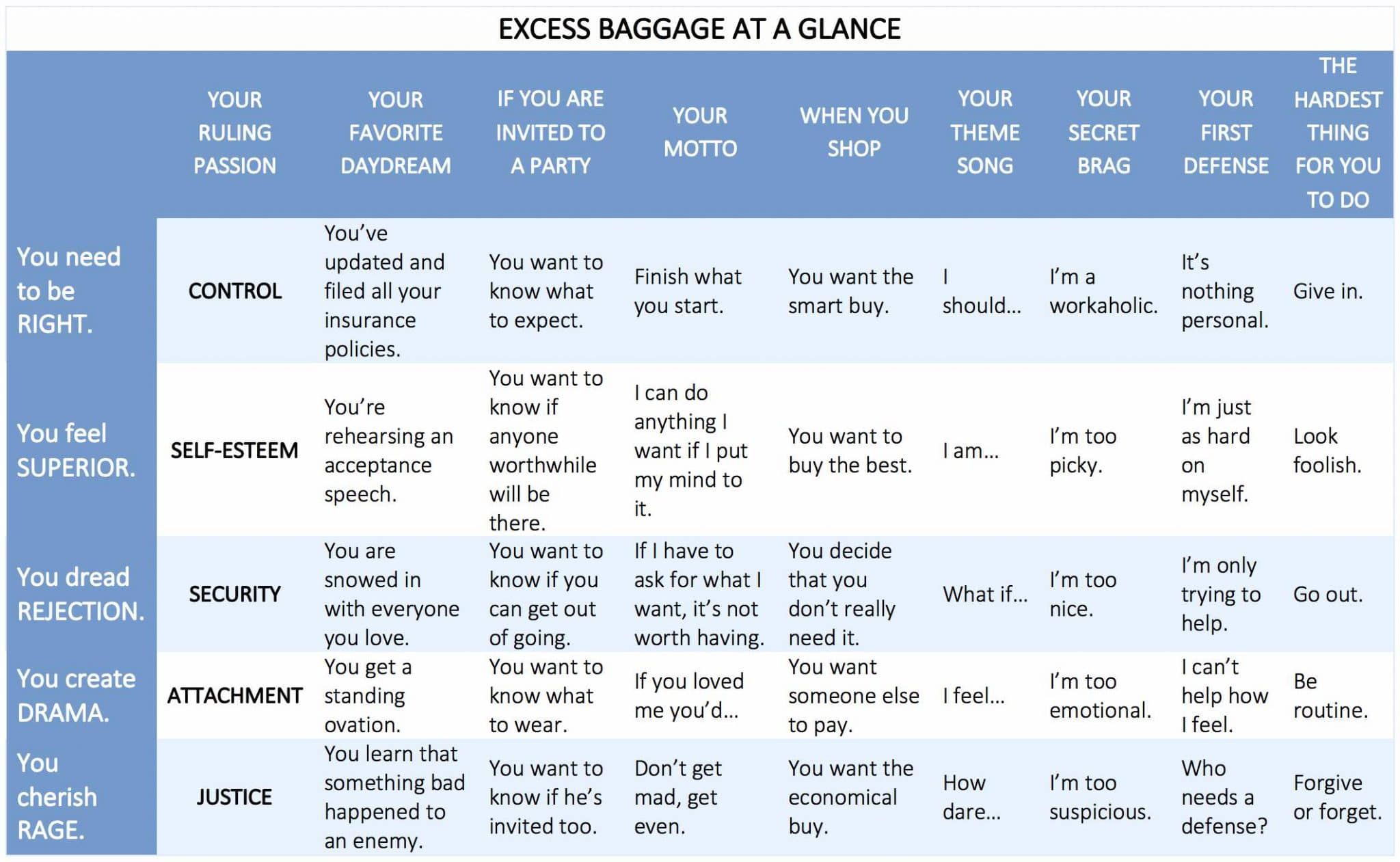 (click on the image to enlarge it. Table source: Excess Baggage by Judith Sills.)

If we can tame the ruling passions, the load will begin to lighten on its own. And one way to pacify these passions is to change what you think, what you see, and what you do. In other words, unless you open up to other possibilities in life (which can be done by giving yourself a purpose in life, being mindful of your thoughts, feelings, words, and actions, and broadening your view by reading good literature), nothing different is going to happen in life.

Mulla’s wife wanted him to buy her a gift on their upcoming wedding anniversary but Mulla was out of moolah. He decided to nick one from the store but got caught.

“The charge against you is that you broke into a store four times,” the judge said. “Do you plead guilty or not guilty?”
“Guilty, your honor,” Mulla said, “I admit I stole a dress for my wife.”
“A dress? You broke in four times, Mulla!”
“She didn’t like the color the first three times, sir.”

Until you make peace with your existence and inculcate mindfulness in your life, the same cyclical emotions will continue to dictate the course of your life making you run for the same thing repeatedly. If you wish to take a different route, the vehicle must be steered in that direction. We may think that other people are the cause of what’s happening in our lives but there’s only one person in your way: you. As Krishna says, you are your best friend and your own worst enemy (uddhared ātmanātmānaḿ nātmānam avasādayet…BG 6.5).

Get out of your own way.

The Marshmallow Experiment
A Thousand Marbles