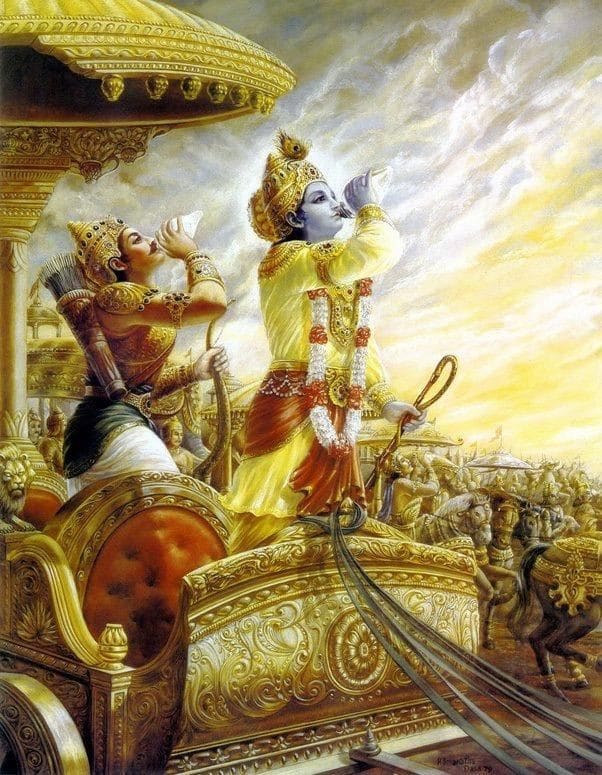 We all know the story of Ramayana and Mahabharata. There will rarely be any Indian who doesn’t know them.

Ramayana and Mahabharata—these two epics are the very fabric of Indian thought and culture. For thousands of years, these two books have been the pillars of Hindu civilization and Sanatan Dharma.

The stories, the characters, the morals—have become a part of Indian consciousness. And why only India, many countries outside India are also deeply influenced by the teachings and philosophy of these two classical texts.

Whenever we talk about dharma, karma, gyan or bhakti, we resort to these two giants. Giants not only in volume, but in their depths and profundity of wisdom and insights.

Ramayana is the story of Raja Ram, the scion of Ayodhya and the seventh avatar of Lord Vishnu, who appeared in Treta Yuga. A great battle was fought between Ram and Ravana, the rakshasa king of Lanka, who abducted Mother Sita. After a terrible war and fourteen years of exile, Lord Ram and Mata Sita, along with Lakshman, came back to Ayodhya.

Mahabharata tells the story of the Kauravas and the Pandavas. They were the descendants of the great king Bharata. Here also a great battle was fought on the fields of Kurukshetra, over the ancestral land of Hastinapur. Lord Krishna, who took birth as the eighth avatar of Lord Vishnu, helped Pandavas to win the battle and establish dharma on earth.

But these are not just historical or literary stories. The stories are there to convey to us something much deeper. Whether the battles really took place or not, is not the point. The stories and characters are symbolic in nature and serve as mediums to transmit the complex ideas of dharma and karma, bhakti and mukti. In a nutshell, these two epics are the treasure troves of the whole Indian spirituality and wisdom.

The great Kurukshetra war was imminent. Duryodhana, the leader of the Kauravas and the main opponent of the Pandavas, was adamant in his desire. He would not part away with even one inch of land with the Pandavas, who were actually their cousin brothers. He wanted to be the king in the place of Yudhishthira, despite the fact that it was Yudhishthira who was the worthy heir to the throne of Hastinapur. Every effort to make peace had been in vain. Nobody could stop the bloodshed now, not even Krishna.

But, you know Krishna…A mischievous and ever-smiling rogue he is! Nobody could fathom him. It was supposed to be noontime. Krishna, after his lunch, was taking a nap in his tent, which was actually an act of pretence. He had something in mind, and he knew what was going to happen next. So, there he was…lying…with his eyes closed.

A moment later Duryodhana came to visit him. We should keep in mind here that Krishna never cast away Kauravas. He was equally affectionate for them also. But he chose Pandavas because they were on the side of dharma. And that he was not biased to the Pandavas will be clear from this story.

Duryodhana saw that Krishna was asleep. So he decided to wait. He sat towards Krishna’s feet. But, a moment later he thought he was the king of Hastinapur, and Krishna was a cowherd, not even a king. So why should he sit under Krishna’s feet? He got up and sat beside Krishna’s head.

Now Arjun also came. He saw Duryodhana, and without saying anything just sat towards Krishna’s feet, earlier where Duryodhana sat. Now, it was time for Krishna to break the act. He opened his eyes as if waking up from sleep, and saw Arjun, and said, “Arjun, you?” Duryodhana also made his presence felt now. “O, you too!”, Krishna said. He very well knew everything and why they came. But it was a moment of epochal changes and also a test for Arjun. That meeting changed the course of the story.

Krishna said (I am paraphrasing): “I know you’ve come for my help in the war. But here is my condition: either you can have Me or you can have my Narayani sena. And I will not fight. Now, since I saw Arjun first, I give the first chance to Arjun. Tell me Arjun, what do you want, Me or my army?”

Duryodhana protested a little bit saying, “But I came first! I should be given the first chance!” But as was his intention, Krishna said, “But I saw Arjun first.” He intentionally played this game and gave the fisrt chance to Arjun.

But, we can learn a thing from this incident. Arjun had humility, unlike Duryodhana, who in his arrogance, got up and sat beside Krishna’s head. By this time, Arjun had started to regard Krishna as a very dear friend and also his guide. So he had that respect and humility for Krishna. But Duryodhana never regarded anyone higher than him. He had the arrogance of a proud king. So, the lesson we can learn from here is that, God is only approachable to one who is humble and surrendered. Humbleness or vinaya is a trait that God likes very much. Among other traits, Krishna speaks of this trait in Gita.

Now it was the time to choose. And the whole course of events hinged on that decision. Arjun said, “Madhav, I don’t want your army, I just want You! Be with us, O, Keshav!” That decision changed everything.

Duryodhana laughed in his mind—“What a fool Arjun is! Choosing Krishna over his army! Ha, ha! And Krishna won’t even fight!” He sighed in relief that he got Krishna’s invincible Narayani sena.

In the battle, Kauravas had 11 Akshouhini sena, whereas Pandavas had only 7. Moreover, great maha-rathis like Pitamah Bhishma, Guru Dronacharya, Mahabali Karna and many other great warriors were with Duryodhana. On the other hand, Pandavas were relatively few in numbers. But they had Krishna with them, also lord Hanuman! And it made all the difference!

After 18 days of gory bloodshed and revenge and death of over hundred thousand soldiers and hundred Kauravas, Pandavas finally claimed victory, which was absolutely impossible had Krishna not been with them.

So, from this story we learn that when Lord is with us, that is, when we choose Lord over and above everything else, God takes care of us, no matter how great the crisis is. We’ll cross the ocean of dangers, like the Pandavas did.

Translation: Bhishma, Drona were the two banks, Jayadrada was the water, Shakuni (king of Gandhara) was the blue lotus, Shalya was the crocodile, Kripa was the tide, Karna was the mighty wave.

Ashwatthama and Vikarna were the dangerous alligators, Duryodhana was the whirlpool. Pandavas crossed this river of war with Krishna as their helmsman.

Thank you for your patience.


Login with Email
No Account? Create One
Travelling
No is the Way to Yes