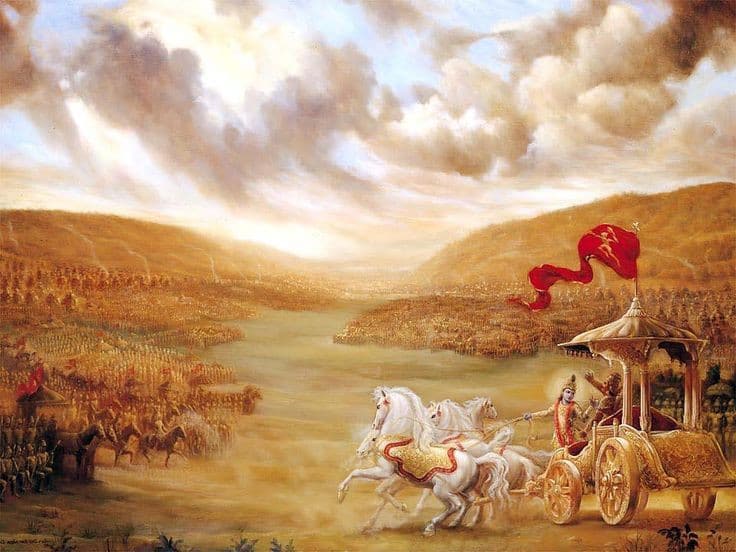 A Lesson in Humility

A Lesson in Humility

In the previous lesson, we saw how Arjun’s faith in Krishna saved them ultimately. Today we will focus on humility. There are two stories (that I know, there may be more) that teach us the importance of humility. By the way, what is humility?

It’s called vinaya in Sanskrit and one who is humble is called vinayi. Humility is an attitude. It shows that you do not put yourself egotistically higher than somebody. One who has much pride or is egoistic, cannot be humble to others. Ahankar (ego) and vinaya (humility) do not go together.

Why It’s Important to Be Humble

In this vast universe, we are specks of dust, no? Who are we? Stephen Hawking, the great theoretical physicist, said:

“We are just an advanced breed of monkeys on a minor planet of a very average star. But we can understand the universe. That makes us something very special.”

Somewhere in our minds, we have this notion that existence is human-centric, that the universe is made for us. But if tomorrow the whole solar system evaporates, no dent will be felt in the universe! We come into this world as any other creature, and we die the same way. So where does this self-importance come from?

Life teaches us to be humble in its own ways—when we realise we don’t control anything!

Humility is a mark of an evolved character. See Lord Ram, for example—how humble he was towards everybody. Despite being a king, he treated everyone equally with respect and love. One such example is that of Shabri, the old woman, who offered Lord Ram fruits, which she first tasted. But Prabhu Ram accepted them gladly, though it became ‘impure’ by social customs.

Unless there is humility in us, we’ll never think of others as equal to us. We will always regard others as lower or inferior to us—which is a disaster to humanity. To be human is to be humble. Arrogance or pride only isolates us from others.

The Pandavas had lost the game of dice. Not only did they lose their wealth and the land of Indraprastha, their wife, Draupadi, was also humiliated and disrobed in front of the whole Kaurava assembly, and they could not do anything. To add to their shame, they were conspired to go on exile for thirteen years—twelve years of exile and one year of incognito living. This was the hardest time in their lives.

You know Bhima—how proud he was of his strength. He had elephantine strength. After all, he was the ansh of Pavan dev, the god of the wind. Two things he was always proud of: first was his great appetite. He could eat more than all other Pandavas out together. That’s why people addressed him as Vrikodar Bhima. ‘Vrikodar’ means one who has a big stomach, or great appetite; the second thing was his strength. He never hesitated to demonstrate his power, even if it is in brutal ways.

One day, he was aimlessly walking, because he was feeling restless. The hurt, the humiliation, the injustice that had been done to them, always made him boil in anger and rage. He was just walking to settle his anger when he came across an old monkey sitting under a tree. His long tail was blocking the way.

It is considered ‘not right’ to cross somebody’s limbs and go over. Bhima told the monkey, “Take your tail aside.” The monkey replied, “Can’t you see, I am an old monkey, I don’t have the strength now to even lift my tail. If you have any problem, why don’t you lift it?” Bhima said, “Ok, fine.” And he couldn’t!

He used both hands, but could not lift it even an inch. He realised this cannot be just a normal old monkey. Then he became humble and folding his hands asked who he was. He was none other than Hanuman! Bhima bowed down to him, and Hanuman gave him his blessings.

Arjun always wanted to be the best archer in the world. Anybody who challenged his position, he would go in a duel with him. Deep down he was always insecure. He always feared the possibility that someone else might be a better archer than him. So his pride of being the best archer had to be broken.

Arjun went hunting. He saw a deer and shot it with his arrow. But the deer ran away. He went in search of the deer, and when he found it, he was astonished to see two arrows in the deer’s body. Just then, a tribal-youth of the forest, a Kirata, appeared there and claimed that he had shot the deer first. Arjun felt insulted. How can a tribal boy claim his prize? He roared, “No, I shot it first. This deer is mine.” The Kirata-boy challenged him in a duel. Being a Kshatriya he cannot refuse any duel-call, and besides, it was a matter of his pride. So he raised his Gandiva. They both fought valiantly, but ultimately Arjun was defeated. Arjun accepted defeat.

Then the Kirata-boy revealed his true form—he was Lord Shiva himself! Arjun learnt his lesson. Lord Shiva blessed Arjun with a divine weapon, the Pashupat-astra.

And thus, both Arjun and Bhima learnt the lesson of humility.

Humility is the basis of humanity. In pride or ego, we regard others as inferior or less than us. One who is humble is down-to-earth. He respects everybody and treats even animals with dignity. This attitude makes us better human beings.

Link for previous part: A Lesson in Faith.

Thank You for reading! 🙏


Login with Email
No Account? Create One
The Night of Devi
Happiness comes from solving problems