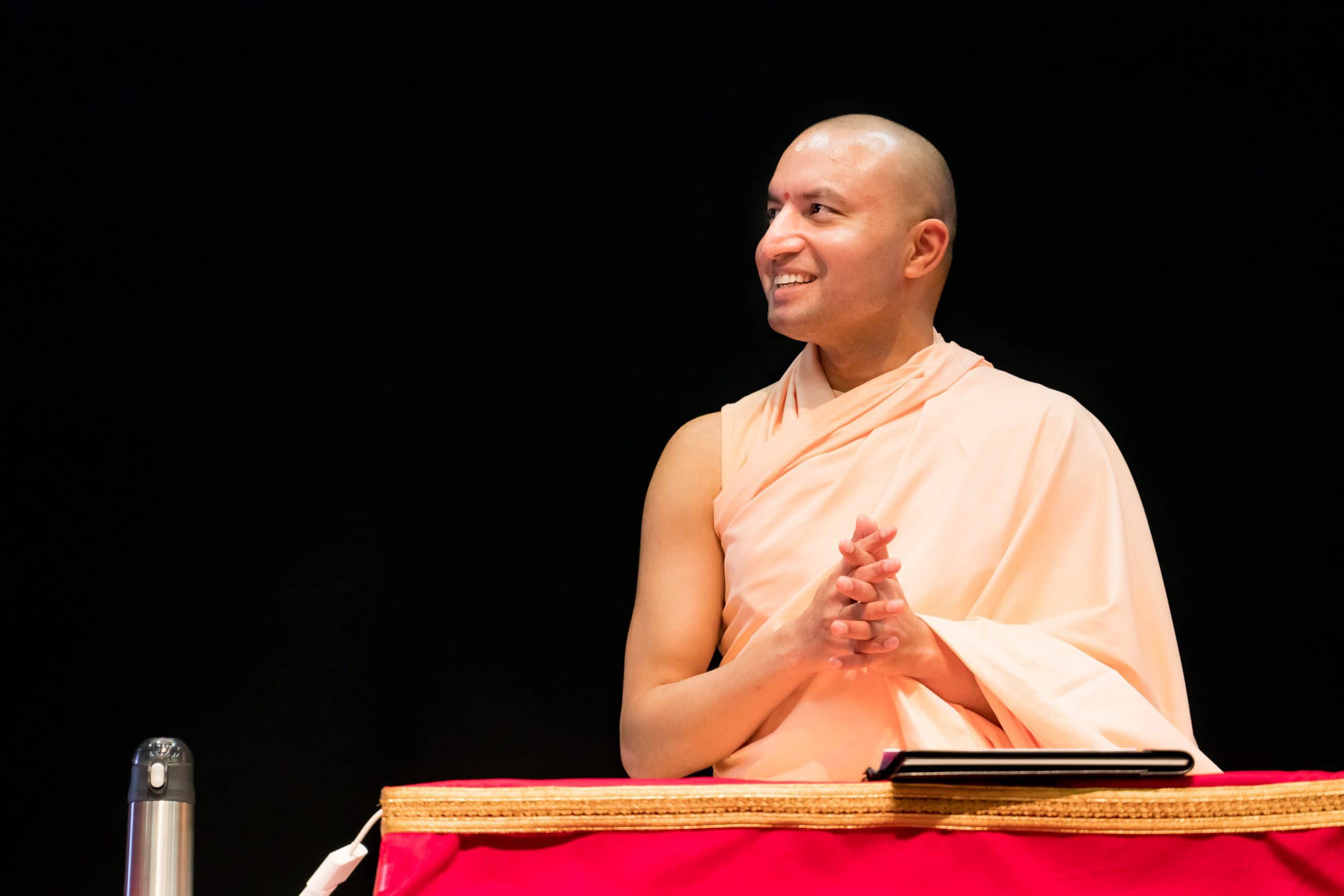 A Puzzle So Simple

Happy Birthday to my Guru and the universe’, too!

I know of no way to start this little letter of mine besides Happy Birthday, so, Happy Birthday! ❤️ And that most certainly is not because I have nothing left to say- which little child of the divine would not babble if only she got the chance to do so! But, this time around, I fall silent, for the emotions rise too high in me, like the tides on a hot summer night, reaching out to touch the moon, but they never can- for it is so near, yet at times, feels far away. I fall silent this time, Swamiji, for words fall miserably short when I try to explain any kind of beauty related to you in their curvy, scrawly form- whether it be about your eyes gleaming brighter than a firefly in the night’s soft bliss, your smile that makes us feel happiness beyond expression, or the swish of your robe indicating your arrival that sends a tingle down one’s spine unlike anything other form, or whether it be simply how much beauty you have added into our lives! But here’s the catch- I wrote simply, but it’s just not simple!

Since the first time our family travelled to the ashram and saw your divine form, we were enraptured, enchanted, astonished and awestruck all at once. You never fail to surprise me with how cleverly you observe each of my thoughts, and showing it in ways only I can understand.

But there is one thing I haven’t understood in five years and I try to constantly- I know you, yet do not. I comprehend your words, but never you yourself. You’re there, but you seem to be everywhere.

And I know I’m lazy, (I will get to that work soon, I promise!) and I can’t do much, but I wrote a poem just to let you know the sea of emotions I feel each time I’m around you- inquisitive, loved, loving, awed, devoted- if this was a MCQ paper by CBSE, in every question I’d get, I’d tick all of the above. Because you are all- above and below, everything I know and yet don’t. And so goes my flimsy attempt at expressing you in words:

A tender drop sits at the feet of the Himalayas
Gushing all through the the valleys down and low
She says not, she does not, ungratefully she weeps
While the Himalaya over his child does not his brow furrow-
For every inch of his grandeur of icicles and snow bewitching
Gleams with the warmth of starlight,
For his eyes reflect a hundred times of the same
Oh lord, why can I see you not when you stand in plain sight?

The deep, silent stillness of your form puzzles the greyest of clouds
And not even do their black forms petrify the drop that lies silent inside
For you cradle in your loving arms her ignorant existence
Although a flick of your finger vast as the seven seas could toss her merely aside.
Yet your lips pink as a Himalayan lotus tweak incomprehensibly-
And left wondering is your undeserving offspring mystified,
On the Earth you’re crowned, the skies you rule
Where are you, O lord so sweet, tell secrets bonafide?

How fragrant is the gravel that tumbles incessantly from you, lord?
Is there no end to your merciful, pacifying landslide?
I build a wall with toil, but ego is its brick
And yet shattering it, in my heart you perch, somehow finding your way inside.
Mountain passes cut we, inconsiderate, into your fair form-
Yet push not with your glaciers our seeking hammers askew-
Lord, I see you in ochre, but also colourlessly colourful as love- an emotion,
I ask only one answer from you, O high as the Himalayas, but humble as nought-
Who are you?

Thank you so much for being a part of our lives- embellishing your sweet smiles for our happiness, writing blogs so we become a little educated, speaking in your voice so impossibly beautiful- it just means so much. And please do rest- I feel so guilty every time I realise how much time you spend working harder and harder for our sake.

Once upon a time, Mulla Nasruddin was strutting to his acquaintance’s house for a party he had been invited to, all dressed up in fancy robes, when he came across another friend of his travelling down the same street as him.

“Mulla! I was just coming to visit you! Where are you off to all high-dressed-up?”

”A party, my friend! I am fortunate enough to be invited to three. Would you care to come with me?”

“Surely, I can’t go with these clothes on.”

”That can be fixed.”

Soon enough, Mulla and his friend, clad in silks traipsed down the street until they reached the door of the said acquaintance. The door opened to show a warm and welcoming face, as he invited Mulla in along with is friend. It was Mulla who spoke first. “This is my friend. He is wearing my shirt.”

Mulla’s friend was aghast. He pulled Mulla aside. “What are you doing? You can’t go about to people saying that!” He whispered angrily.

“Ok, chill. I won’t do that next time.” He said, brushing his friend’s hand off.

Soon enough, Mulla and his friend reached the next house to be graced by his presence. As soon as the door opened, Mulla said, “This is my friend, and he is not wearing my shirt.” Mulla’s friend was, yet again, frustrated.

He took Mulla aside and said aloud as they stood in a corner. “Don’t say that, either!”

”Jeez, I won’t.” Said Mulla, brushing it off again.

All was soon forgotten and they reached the door of the third house, their tummies mostly full. They knocked on the door and their host peeped out, smiling to see two well dressed gentlemen. “Mulla!” He greeted. “How incredible to see you! And who may this gentleman be?”

”This is my friend. I will not say anything about his shirt.”

That was my feeble attempt at telling a joke. I sincerely hope you liked it! Once again, a very, very, very, very Happy Birthday. We shall forever treasure your presence in our lives, for you are the one who made it a treasure of love and good memories in the first place.

A/N: My sincere and heartfelt thanks to all the wonderful souls from osdotme who took the time to read this post of mine. I also want to apologise profusely for not being on osdotme recently. There’s a ton of homework! I can’t wait to read, however, the amazing posts that will gush in today- for we all have an amazing, incredible topic, don’t we? Much, much love to each one of you. Thank you for being a part of my family and life.