A second that changed my life

Imagine yourself, sitting at your table in your formals, waiting for the most important interview of your life. You are staring at the screen, waiting to be called in the main room in zoom meetings, when your phone rings and the voice on the other side says, ‘Aasra, your mother, and father met with a terrible accident, we still do not have any updates if they are okay or not’.

There is always one person in everyone’s life who is our strength, one immediately gets energized by just a look of that person. For me, it is my Father. One has rightly said that every girl’s first love is her father, and I can easily claim that my father is the best father in the world.

I have always turned up to him at every ups and downs of my life. I know for a fact that if I am in some trouble, my father will magically make everything easy for me. Everyone who knows me tells me how strong and confident I am, and I never get tired of praising my father for how well he has taught me the important life lessons and gave me the strength to face every problem in life.

The instant that changed my life was when my family met with a terrible accident.

My father along with my family was headed to delhi for some work when there was a collision with a truck. And my father lost his ability to walk, or in fact, do anything. He suffered a fracture in his spinal cord at C4 and C5 region and got paralyzed below the diaphragm region.

I still remember the exact moment when I received this news. I was sitting for an interview on zoom call when my phone rang, and said, ‘Aasra, your mother, and father met with a terrible accident, we still do not have any updates if they are okay or not’. My soul broke into millions of pieces. There was a throbbing pain in my chest and I felt that there may be a slight chance that I have lost the two most important people in my life.

I immediately called my uncle who had already got the news and had left for the site of the accident. I was at home with my dadi (grandmother) who is a diabetic patient, so I couldn’t tell her what had happened. I called a friend of mine and cried loud continuously for an hour without any information about what had happened and if they have survived or not.

After about 1.5 hours I got a call from my uncle saying that my parents have been taken to the nearest hospital. I felt relieved that at least they are ALIVE!!!

But then, another sharp pain hit my chest when my uncle said that my father suffered from a Spinal Cord Injury. Being from a commerce background, I did not know the full details, but I did know that it leads to paralyzes of the body.

Till that day, it was the toughest night of my life (I didn’t know that there were more to come). I cried my eyes out alone at home. I pretended in front of my grandmother that nothing had happened because I could not risk her knowing everything as this might have had an adverse effect on her health.

My parents were immediately taken to the capital city for further treatment in an ambulance and I eagerly waited at home 5 hours away from them to know what was going on, and if they were fine. My mother’s condition was stable but my father was critical.

Due to the covid situation, there was a possibility that we would have not got the beds in the hospital, but due to some of my relative’s contact we were able to contact the best surgeon around, and my father went for the surgery at 3 Am. His surgery went till 5 Am, and he was then shifted to an ICU. He was on life support (Ventilator) after the surgery and doctors said that there is little chance that he would ever be able to come out of that ventilator stage.

After 3 days I was able to travel to the capital city, and I met my father. I still remember how hard my legs were shivering as I walked towards that ICU room to see my father. My heart was about to burst open when the nurse pointed out towards a bed that you can go there. 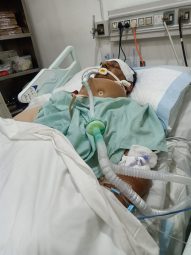 My father was unconscious and he had bitten the pipe of the ventilator because of the discomfort it was causing him. I controlled my tears and just looked at him with a heavy heart. My father has always taught me to look at the brighter side of any problem you come across. But it was difficult, it was damn difficult!.

I stayed near the hospital for several days as my father was still on the ventilator for 20 days. There were many days when I felt so helpless as the doctors constantly said that there was no guarantee if the life support system will be removed, but in this condition also, my father gave me the strength to keep going. When he came to his senses he would talk to me with his eyes. As he was still on life support, he could move his neck, and the rest of his body was already paralyzed, but he would still bring a smile on his face so that I feel strong. 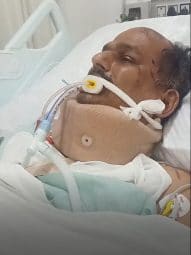 But little did we know that this accident was not enough and we will have to face a lot more difficulties in the coming future.


Login with Email
No Account? Create One
Turn your wound into wisdom
My New Babe