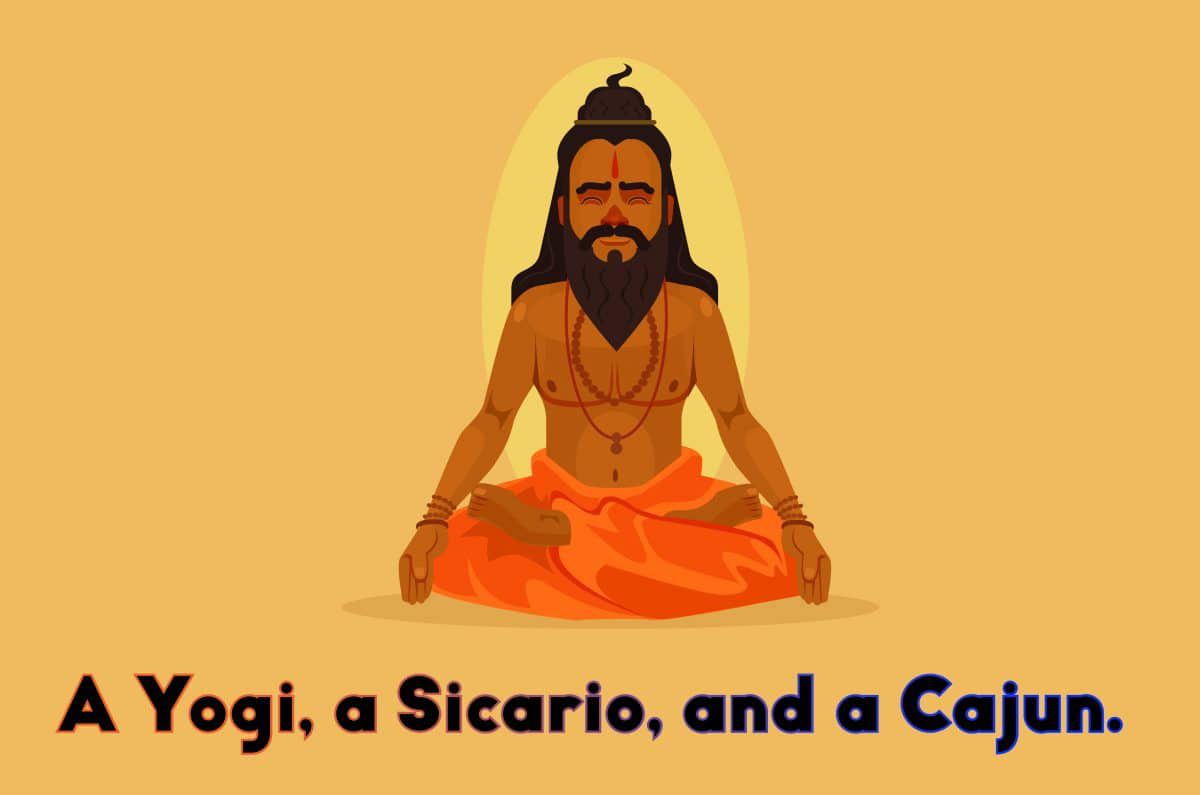 A Yogi, a Sicario, and a Cajun.

Faith without works is roadkill.

On February 19, 1986, when I was sixteen years old, a man was assassinated in front of the Salvation Army Center in Baton Rouge, Louisiana. I grew up in Sulphur, Louisiana, just a few hours away, and this story was big news in my hometown.

He was a drug and gun smuggler for the Medellín Cartel and, notably, Pablo Escobar. He became an informant for the DEA, and the cartels had put a $500k contract on his life. A judge had ordered him to stay at the Salvation Army as a halfway house – probably to intentionally leave him unprotected. A group of Columbian sicarios gunned him down, fulfilling that contract. His name was Barry Seal. His story was later made into the 2017 film “American Made,” starring Tom Cruise.

My mentor Brooks Fleig was a chaplain in my home parish of Calcasieu in Louisiana. He worked with both the police and sheriff’s departments for almost two decades. After being caught and sentenced for Barry’s murder, one of those sicarios spent some time at the Calcasieu Parish Jail. Brooks met with him on several occasions, and they had long conversations together with bars between them.

The most interesting thing about this sicario was not that he had killed Barry Seal but rather that he could quote the entire Bible from memory, even different versions. Brooks said that you could give him any chapter/verse combination, and he would quote the scripture back to you. When Brooks asked how he had come to know all the scriptures, he replied, “It’s the demons inside me that know.”

Many years later, while I was serving as a minister in Louisiana, a gentleman came to me for relationship counseling. When I got to know him, I found a very selfish and egotistical person who frequently neglected his spouse, child, and responsibilities. He was also somewhat of a savant and had memorized the entire Bible. He proved it to me repeatedly in men’s retreats and Sunday school settings. He knew it like the back of his hand. Or did he?

I would remind this gentleman about Ephesians 5:25, where Paul extols us, “Husbands, love your wives, just as Christ loved the church and gave himself up for her!” This man had quoted the verse a thousand times but didn’t know anything about it! Regurgitating wisdom and understanding wisdom are eons apart.

Om Swami is one of the few enlightened beings in the public eye. In his memoir, “If The Truth Be Told,” he relates several of the severe austerities (spiritual practices) of his first guru, a tantric master:

“In the winter, he did jala dhara, water flow, by sitting under a leaking pot of ice-cold water. He would sit naked while 108 pots of water would be poured over his head from midnight until 4 a.m.”

“In line with the austerities of hatha yoga, he had also done a number of practices, including pancha-agni-dhoona, where the practitioner draws a circle, seats himself in the middle and lights a fire in the four directions along the circumference of the circle; the fifth fire, the sun, burns above. Baba would do this for forty days during the height of summer from noon until 4 p.m.”

“For more than forty years, he had been on phalahara, a gluten-free diet.”

“Baba had also done the khadeshwari sadhana, where he did not sit down for nine years at a stretch.”

After relating all these practices (and more), Om Swami says of His guru, “There was not a tantric sadhana (spiritual practice) in any scripture Baba hadn’t done. All in all, his accomplishments were quite impressive. With all this sadhana though, Baba remained an angry man. Watching him, I learnt a powerful lesson: religion and religious rituals and practices do not get rid of the restive tendencies of the mind because it isn’t just about practicing a ritual or sadhana. What matters is how they are done, with what intent and sentiment they are performed.”

Inside religion, humans often compete for who knows the most or who can out-sing or out-serve the others. Evangelicals call this process “faking it till you make it.” I’ve never experienced any organized religion where this wasn’t the case. If humans aren’t competing for money-materialism, then they’ll compete for spiritual-materialism. All of it is empty, which is why most Western religious organizations are powerless.

A Columbian sicario, an Indian Tantric guru, and a deadbeat Cajun husband walk into a bar –  what do they have in common? They all hid wisdom in their mind instead of love in their heart. Wisdom is only absorbed if it is lived out in sincerity.

Faith without works is roadkill.

I meet people continually who are bloated like a beached whale with some spiritual practice, and with their next breath, they express their fear, anger, greed, or jealousy. Scriptural knowledge or ferocity of practice is not the litmus test for spirituality. Instead, it’s the ability to love unconditionally.

Before you decide to follow some “teacher” or “guru,” ask yourself, “How relentlessly can this person love?”  Do they love their enemies? Do they love and pray for those who persecute them? Do they sacrifice for those less fortunate? Does their heart melt with compassion for the disenfranchised and downtrodden? Can they forgive swiftly?

Indeed spiritual humans, those sincerely in touch with the Divine, are only other-focused. They love everyone as themself.

Whatever your spiritual practice, teachers you follow, or path you are on – the point of all of it is to become a more loving servant of the Divine. If you are serving the Universe, you love everything in creation, including all of the humans God made.

So study, chant, pray, meditate, repeat, pose, memorize, sing, rock climb, or surf – whatever brings you closer to Divinity – DO IT! All the while asking yourself, “Is my intention in doing this to love and serve?” If so, bravo, If not, practice more or find the practice that delivers to you a servant’s mindset.