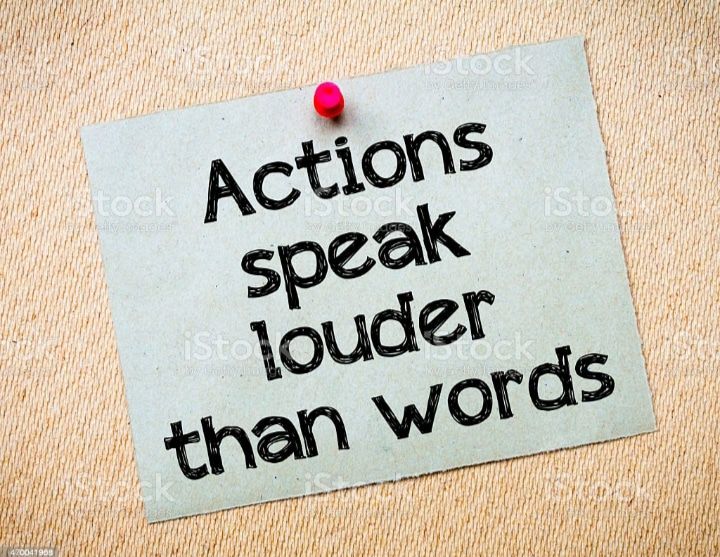 “Action speaks louder than words” is an old-aged proverb that has a very important, inner, and deep meaning. It means that no matter what you speak but your actions will have a far greater impact. The action of every person has a lot more strength than their words. For achieving success in life one must act on it or do efforts rather than just talking about it. Those people who don’t do efforts and just talk and show off never achieve success in their lives.

Overconfident people talk about big things and make Castle in the air without doing efforts which look very crazy as people believe in these things only when you perform on it. We see and observe different kinds of people in our day-to-day life. Some are, who boast of their talent by making tall claims but when their chance comes to prove by actions, then they fail. Thus they are limited only to good words and not actions. On the other hand, we have those people who directly prove their talent by their great actions and leave an unerasable mark without much publicity.

In today’s life, people do not believe or focus on great sayings rather they concentrate much on actions and results. According to Dr. Charles & Dr. Elizabeth, “Words are cheap and actions mean everything”. People pay more attention to what is being done rather than what is being said. This is because people always break their promises without taking any actions to prove that what they said is right. The true character of a person is indicated more prominently by his or her actions, than by what they speak.

For example, if you are a good and intelligent student, and you keep saying that you will come 1st in class, it will not give you the pride and respect that you will earn when this fact comes true by your 1st position. The day you come first in class, it will be known by all sooner or later and that time you will get more respect and pride so it is better to step ahead, work hard, achieve your dream, rather than feel proud by just saying great things about it.

1. Judge your skills before claiming something big.

2. Never be lazy and waste your time on speaking rather than acting on it.

3. Always penned out your plan according to your capabilities before claiming anything.

4. Wait for the right time, your actions will speak instead of your words.

In conclusion, I want to add that actions are much more effective than words. A person who is taking action to perform their tasks rather than just explaining and talking about how difficult the task is will earn more respect. People will only believe in the person who can act simultaneously, and not just says without any action. So, if I have to choose between actions and words, I will surely choose actions. This is because what we do is much more significant than what we say. It is better to take a step ahead rather than just saying. So, we should think carefully before we say anything and all should believe on actions instead of words.

How to Accept Someone Completely?
Hope, Believe and Live On