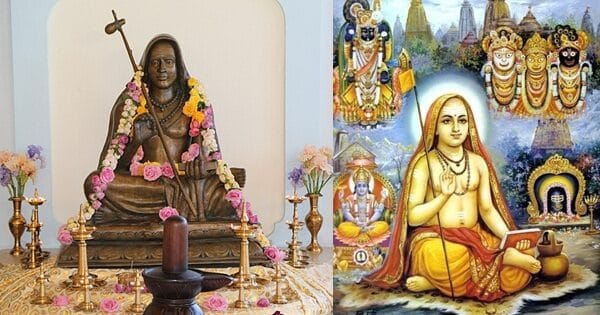 Adi Shankaracharya was born at Kaladi village in Kerala to Sivataraka. According to the book ‘Chronology of India’ by Vedveer Arya, Adi Shankaracharya was born on Vaishakha Shukla Panchami in 568 BCE in Punarvasu Nakshatra during noon time. It was  6th/7th April according to Gregorian calendar. He was a Nambudiri Brahmin. When he was born, his parents, childless till then, were aged; they dedicated their life to the service of the poor. He was named Shankara, meaning ‘giver of prosperity’ and another name of Shiva. Shankara lost his father when he was very young. His upanayana ceremony was conducted by his mother.  His Guru was Govinda Bhagavatpada under whom he studied the Vedas, Upanishads and Brahmasutra. He wrote several books when he was a student. He wrote commentaries on the Brahma Sutras, Upanishads and the Bhagavad Gita. He involved in through discourses and debates with other thinkers across the country.

Sharda shrine is a Mahashaktipeeth; it was here that Goddess Sati’s right hand fell. It was also an ancient temple university where Adi Shankaracharya Ji studied. Now in Pok in ruins, the last puja at Shardapeeth was performed in 1948.

Vedveer Arya in his book Chronology of India describes the year of the birth and death of Adi Shankaracharya with evidences. To quote Arya, “A Śloka of Prāchīina Śankara Vijaya quoted by Ātmabodha in his commentary ‘Suṣamā’:

According to traditional chronology, Adi Sankaracharya was born in the year 2593, Nandana Samvatsara, on Vaishakha Sukla Panchami, Punarvasu nakshatra. The traditional dates (year 2593) should be calculated with reference to the epoch of the Yudhiṣṭhira era (3162 BCE) and not in the epoch of Kaliyuga (3101 BCE). Thus, Ādi Śaṅkara was born on 6th/7th April 568 BCE in Punarvasu Nakśatra, on Vaishakha Shukla Panchami during noon time. 568 BCE was also Nandana Samvatsara. 17th May 2021 is the 2589th birthyear of Adi Sankarachrya.” Shankara breathed his last in 536 BCE according to the same book.

Adi Shankaracharya unified Sanatanis during his time, traveling across Bharat. He propagated his philosophy – the doctrine of Advaita Vedanta – through discourses and debates. The Dasnami sampradaya attributed to Dattatreya was organized into four mutts by Adi Shankaracharya. Dattatreya was the incarnation of the Trinity – Brahma, Vishnu, and Mahadev. The four Mutts across India are Govardhan Mutt in east (Puri, Odisha), Sharada Peeth in south (Sringeri, Karnataka), Dwarka Peeth in west (Gujarat), and Jyotirmath Peeth in north (Chamoli, Uttarakhand) for revival of Advaita Vedanta.

Advaita Vedanta, a school of Sanatani philosophy, emphasizes on seeking spiritual liberation through knowledge of the identity of the self as Atman, which is same as Brahman, the highest metaphysical reality. Advaita Vedantins believe the soul is not different from Brahman.

Besides the mutts, Adi Shankaracharya also organized a section of warrior sadhus to protect Sanatana Dharma. Later they came to be known as Naga Sadhus. The Naga Sadhus defended Kashi Vishwanath Jyotirling against Aurangzeb’s Mughal forces in 1664, defended Gokul from Afghan forces of Abdali in 1757, won several battles against British in 1775, and won many more battles. During the 1800s Dasnami sampradaya established Akharas with Mahamandaleshwars to protect Dharma and save Hindus from Christian missionaries, rampant during that time. Juna Akhara is one of these.

We, Sanatanis, are indebted to Adi Shankaracharya for what he has done for Dharma.


Login with Email
No Account? Create One
Of Caffeine
Friends (Dosti)