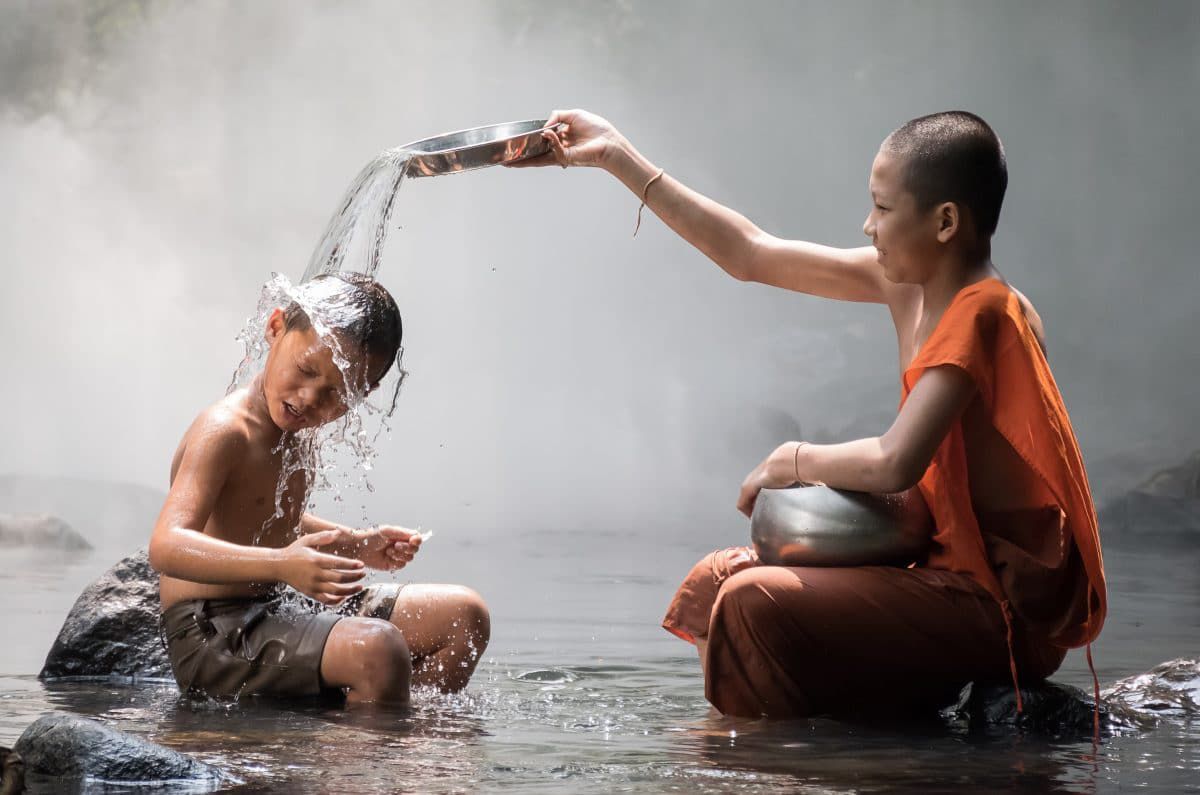 All Things Being Equal

"He who was beating me is now giving me aid."

“There was a monastery in a certain place. The monks residing there went out daily to beg for their food. One day a monk, while out for his alms, saw a landlord beating a man mercilessly. The compassionate monk stepped in and asked the landlord to stop. But the landlord was filled with anger and turned his wrath against the innocent monk. He beat the monk till he fell unconscious on the ground. Someone reported the matter to the monastery. The monks ran to the spot and found their brother lying there. Four or five of them carried him back and laid him on a bed. He was still unconscious. The other monks sat around him sad at heart; some were fanning him. Finally, someone suggested that he should be given a little milk to drink. When it was poured into his mouth, he regained consciousness. He opened his eyes and looked around. One of the monks said, ‘Let us see whether he is fully conscious and can recognize us.’ Shouting into his ear, he said,’ Revered sir, who is giving you milk?’ ‘Brother,’ replied the holy man in a low voice, ‘He who beat me is now giving me milk.'” – Sri Ramakrishna Paramahamsa

Not too long after Ram Dass met Baba Neem Karoli, he was apprenticed to Baba Hari Dass, a silent monk from whom he received a crash course in Bhakti and Ashtanga yogas. During the time they spent together, Ram Dass was only allowed to read the works of enlightened beings. One of those books was “The Gospel Of Sri Ramakrishna,” whose fourteen hundred pages I finally perused. It took six weeks!

For the majority of that time, I’ve been pondering the aforementioned story about the monk’s perspective on life, who so beautifully and profoundly understands dharma. No matter what was happening to the monk, getting beaten or receiving help, he saw both situations with complete equanimity as the will of God. Total, joyful acceptance of what is – this is how we flow with life into our higher selves!

I’ve struggled throughout my life with personal betrayals and injustice from family and close associates. From my perspective, it seems my soul needs to learn that I can only go to God alone. Thus, I’ve constantly been karmically led into situations to face disloyalty. As Ram Dass teaches, “Our mind is our karma.”

One of those situations happened to me earlier this year. I’ve been dealing with the hurt from what transpired. It’s an inner accusing voice that will say things like, “How could you be so stupid?” or “Why would you let that happen again?” I call them pain loops. They indicate my necessity to forgive, to accept, and to return to the neutral present.

My Guru is Maharaj-ji Baba Neem Karoli, and every particle in my universe is under His control. Everything within my existence is part of His leela, His Divine Dance, which is life itself. There are no exceptions. David, a poet, sheep-herd, and the most beloved king of Israel, felt the same way about the Divine. He wrote in Psalm 139, “For you created my inmost being; you knit me together in my mother’s womb. I praise you because I am fearfully and wonderfully made; your works are wonderful, I know that full well. My frame was not hidden from you when I was made in the secret place when I was woven together in the depths of the earth. Your eyes saw my unformed body; all the days ordained for me were written in your book before one of them came to be.”

It’s my Guru (my bringer of light) creating the dharma, the movie that is my life, in every single frame—nothing left to chance or chaos. There is the perfect direction and acute orchestration from birth to passing and from rebirth to rebirth to liberation. Your Guru is doing the same thing for you at this very moment!

After a few weeks of telling that voice, “He who was beating me is now giving me aid,” it’s gotten a lot quieter. I’ve also learned the mantra works no matter what adverse situation I’m facing. It helps me see the learning available in the negative rather than needlessly attaching longing (karma) to it.

Ramana Maharshi and countless other great Yogi’s tell us that we are not our bodies nor our minds; we are only the presence that witnesses our lives unfold. If you were living this out, what would that look like? How would you interact with your environment if you believed that every moment of your life was precisely orchestrated? Contentment is an outward sign of inner neutrality.

Paul wrote to the Philippians, “I have learned to be content whatever the circumstances. I know what it is to be in need, and I know what it is to have plenty. I have learned the secret of being content in any and every situation, whether well fed or hungry, whether living in plenty or in want. I can do all this through Him (Christ) who gives me strength.” People who can let go of personal preference are particularly powerful.

When you’re choosing who to follow in life, look for those who are the most even of temperament, souls who stay neutral no matter how strong the storm around them howls. Mahatmas like Om Swami, Sadhguru, and Guru Singh are never in a rush while at the same time are intensely trying to educate us all about the technology of Yoga. These are the examples we must emulate to lead fulfilling lifetimes—pillars of equanimity.

“He who was giving me aid is now beating me.” or “He who was beating me is now giving me aid.” The more equal you experience God (the Divine, the Universe) in every circumstance, the more contented = loving = kind = patient = longsuffering = gentle = compassionate (ad infinitum) you’ll be.

Blessings for your journey,

My Poem: I’m Connecting with You the Line of My Life
Q&A with Swamiji – 27