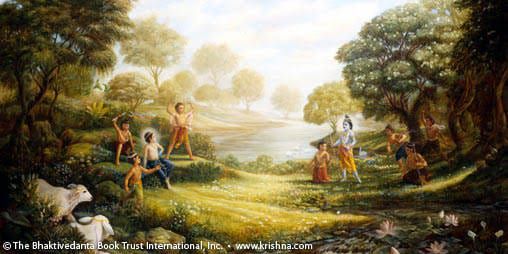 An Act of Defeat

How sweet can a defeat be when it makes you win everything. On auspicious day of Radha Ashtami, here is bonus content for you all to enjoy your winning defeat!

It was again time for the Rasa and the preparations were going on. Our queen was running here and there to organize materials for the Abhishekam of our beloved Madhav. Truly, our queen’s name justified her intentions, Radha, the one who runs here and there to please her Madhav.

I was sitting on the tree, looking at everything that was happening when Vishaka called me.

“Don’t just sit up there. Look for Madhav. He always manages to hide and tease our beloved Sakhi. I still don’t get to understand why he does this everytime!” said Vishaka, frustrated.

“Don’t worry Vishaka” said Lalita, her friend. ” If I get a hold of this notorious trickster, I will pull his ear off. Then he will think twice before doing such a mischief.”

“See your beloved Krishna again went to do mischief and you praise him all day. That’s why I say my Radharani is the best, not like your notorious Krishna.” I said to Shuka,who was sitting beside me.

“Don’t say a word against my Krishna. He is Leela purushottam. Everything he does, is a divine play. You don’t have the intelligence to understand his actions, even your Radharani can’t understand. This is the reason she is being anxious” said Shuka.

“Look who is talking about whom here! May I remind you that the one whom you are talking against is the queen. Even your Krishna has to take her permission to enter the premises. And you are here at her mercy only” I said to Shuka, mockingly.

“They never stop arguing on who is better than the other” said Kalindi.

” I know. If we don’t stop them, they will keep on going like this forever” said Lalita.

“Will you two stop fighting and start searching?” said Vishaka, raising her voice towards us.

We stopped for then and started searching for Madhav all round the Goloka. Seriously, I have heard that planes of other realms that our Lord went had to rely on other sources of light to illuminate itself but here, there was no such thing. The Goloka was the source of its own illumination. And at night, all the trees, rocks and water emanated their own radiance. The waterfall went up instead of down and flowers chanted their glories all time. The fragnance of sndal paste was oozing itself all over the place as if it was  crying for Madhav to be of his service.

We searched all over but couldn’t find Govinda anywhere. We even asked mother Surabhi, whom Gopala used to feed grass during the early hours but she responded negative. Losing all hope and tired, we went back to Rasamandala where Devi Radha was present with all of her 108 sakhis. I went to her and informed about our futile endeavour of searching Madhav.

She patted on my neck and said, with a serene smile,” You did all you could. Now its my turn.”

As she said this, she went under the Kalpavriksha, the tree of desire, and started crying for Krishna. Her crying overwhelmed everyone. Even Shuka who vouched for Krishna everytime started crying with her. Tears started flowing from her lotus cheeks like pearls to fall off on the ground. As it was just going to touch the ground, his divine palms collected it. It was Shyamsundara himself! He emerged from the back of the Kalpavriksha and wiped off our queen’s tears. Devi Radha then garlanded him with the flowers of Vaijyanti which she prepared everytime when it was time for Krishna’s decoration. Then she applied the sandalwood paste on him and did his Shingaar. After the shringaar, the time came for the magnificent Rasa.

Leela purushottam bhagawan played his divine flute and everyone lost themselves to its tune. Everyone dancing in unison as if all of them were the expansions of Devi Radha herself. With a lotus of 108 petals of sakhis, the center which was adorned by Radhamadhav, it all looked enchanting.

After the Rasa was over, I went over to her and asked,” Why did you cry instead of asking him to be present immediately as you are his queen?”

Radha caressed my hair and said,” Krishna is my everything despite whatever he potrays himself to you all. He is my Param Purushottam Bhagawan, my supreme personality of Godhead and being that, it is his very nature to play hide and seek.  And even in the mortal realm, he does the same thing with all of his devotees. He doesn’t want to get caught easily.”

“The mortal realm, Devi!” I said, seeming curious. “Is it where he goes for a fraction of moments and comes back?”

” Is that so Devi?” I said feeling enthusiastic.

“Yes and maybe one day you will go there and understand what true devotion feels like. What true love feels like and you know what, true devotees of us can only be found on the mortal plane, nowhere else. This is the reason he descends down to the mortal plane everytime, not to slay demons but to spend time with his devotees. Demons are just excuses that are placed to spent time with his devotees.”

“Wow, that is great I would also like to visit the mortal plane once. See, what is so astounding about it that Shri Bhagwan finds out excuses to go there.”

“Maybe one day, you will. But when you descend, you will forget everything, even your true self, even us.”

“Then how can I find you Devi? How can I find Madhav? How will I be able to know my true self?” I asked , feeling nervous.

“Let me tell you a secret then.” She took me to her lap and said,” When you will be in mortal plane, the supreme power will try to play hide and seek with you as he does with everyone there. To find him, you must try> You can’t find him without trying. And also, you can’t find him by merely trying. When you try and get fully exhausted, He himself will come out of hiding and reveal himself to you like he did to me few moments back.”

” So that was the reason you cried” I asked her, amazed.

With her ever blooming smile, she replied,” Yes”