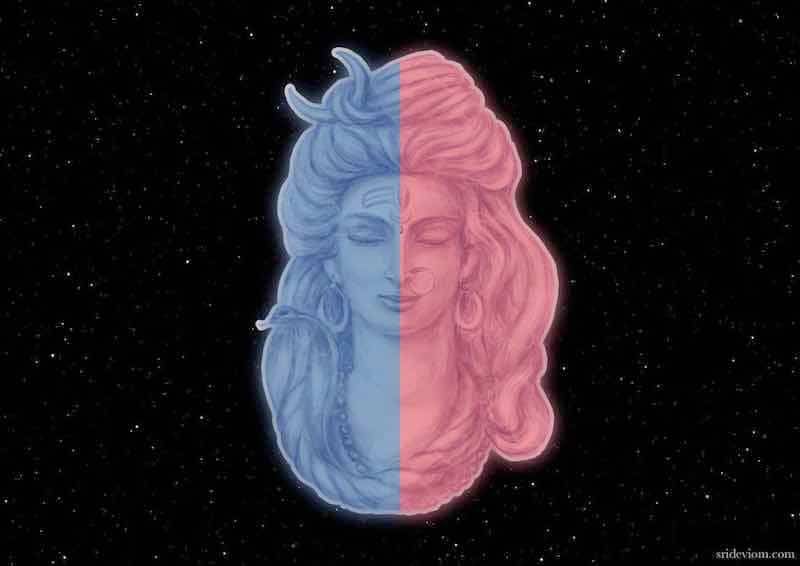 A summary of the ancient sages' wisdom.

Nothing can summarize the ancient wisdom of the sages better than the iconology of Ardha Nareeshvara. This conjoined form is perfectly blended in the middle. It has a male on the right side and a female on the left.

Legend has it that Mother Parvati desired a union with Lord Shiva (Rudra). To be one with him in body, mind, and soul, she undertook severe penance. The purity of her Bhakti and the intensity of her Sadhana or spiritual austerities melted his heart. So much that he instantly absorbed her into himself! Thus emerged the form of Ardha Nareeshvara.

The Lalita Sahasranamam refers to the Divine Mother as Shiva Shakthi Ikya Roopini. In other words, she is the Goddess who’s a merged representation of Parama Shiva and Para Shakti.

In the same vein, Lord Vishnu, who’s physically a man, can also become the enchanting woman Mohini. Some scriptures refer to Lord Vishnu’s inherent feminine energy as Vishnu Maya. Moreover, even though it’s not popular now, there is a merged form called Vaikunta-Kamalaja. In this, Lord Vishnu is on the right, and Devi Lakshmi is on the left.

Rich in meaning, these fused forms connect a broad set of topics. Below are various interpretations of this Divine Union:

The legend of Ardha Nareeshvara glorifies the combination of Bhakti and Sadhana. Our experiences, positive or negative, leave subconscious imprints in us. These impressions become the seed of our behavioral patterns and habits. Sadhana facilitates the purification of these imprints. Whether we use scriptural methods or pursue self-help techniques is a matter of choice.

Further, Bhakti which is not transactional speeds up that internal cleanup. Bhakti becomes non-transactional when its sole purpose is unification with the Source. Through Sadhana and Bhakti, our mind becomes Sathvik or serene and pure. A pure mind, free from internal noise, paves the way for our merger with the inner Divine.

This universe is a perfect fusion of the masculine and feminine. In the Vedic view, That which keeps us alive is considered male. We can think of it as the potential energy of life. It is Nirguna or devoid of any qualities.

The female force enables us to function and interact in this world. It is Saguna or that which has properties. That is akin to the kinetic energy of life. Analogically, in a tree, if everything above the ground is feminine, the hidden root would be masculine.

The scriptures address the male and female principles by a plethora of names. For instance, in Rig Veda’s early portions, the male is Prajapati, the Lord of this creation. And, the female is Vaak, the power of expression. Another combination is Samkhya philosophy’s Purusha, the Masculine, and Prakriti, Mother Nature.

Our body has numerous channels for the flow of Prana – breath, life force, or energy. They are known as Naadi. Of these, three are vital: Ida, Pingala, and Sushumna.

Figuratively, women are related to Chandra, the moon. Due to the menstrual cycle, her body waxes and wanes like the moon! Hence, Para Shakti personifies the Ida or Chandra/Moon Naadi. That is the cooling breath flow, situated on the left side. The Pingala or Surya/Sun Naadi is on the right side of our body. Parama Shiva represents this flow of warmer breath.

Shakti is the Kundalini energy coiled like a serpent at the base of our spine. Her final destination is Shiva, who is said to reside at the top of our head. As per Sri Vidya Tantra, there are seven energy Chakras in our body. Through meditative activities, a practitioner of Tantra channelizes their energy through these Chakras.

When all of these Chakras get purified, the Kundalini energy arrives at its destination. That occurrence, the energy reaching the final Chakra located in the head, is a spiritual panacea. The Lalita Sahasranamam refers to that as Shiva Shakthi Ikya Roopini, that is, Shiva and Shakti’s united form.

Many operations of our body’s right side lateralize to the left brain. Significant portions of the left brain are associated with logic-based skills, such as science and mathematics. Shiva, on the right side, represents these head-oriented qualities.

On the other hand, our brain’s right hemisphere coordinates our body’s left side. Predominantly, this hemisphere is involved in creative and artistic talents, represented by Shakti.

To experience fulfillment, each one of us must become the merged form of Shiva-Shakti. In other words, we should nurture our brain in its entirety. If we remain biased towards either logical skills or creative abilities, incompleteness and restlessness will become our eternal companions.

From a physical perspective, Ardha Nareeshvara represents reproduction. In the good old days, the process of procreation was considered sacred and worthy of worship. In Sanatana Dharma, every act that is natural and performed with pure sentiment is holy. Even psychologically, activities treated as a taboo attract more attention.

When adults don’t shy away from the topic of sexual union, the kids learn to respect rather than explore it beyond necessity. The typical representation of Ardha Nareeshvara as Shiva Linga on a Yoni, the genital depiction of copulation, was the earliest idea of sex education.

Besides, if we could approach intimacy with a perception of Divinity, as against lust or leisure, we’ve reached the highest spiritual realm.

Finally, this consolidated form gives out a strong social message. A man and woman may think, behave, and function differently. Sometimes, it could be to the point where one gender struggles to understand the other!

Yet, in essence, they’re the same. Divinity most certainly sees them unbiased. Until we learn to see everyone as equal and, particularly, treat our partner with respect, we can’t claim to be worshippers of Ardha Nareeshvara.

Its not you, its them
I’m Home!