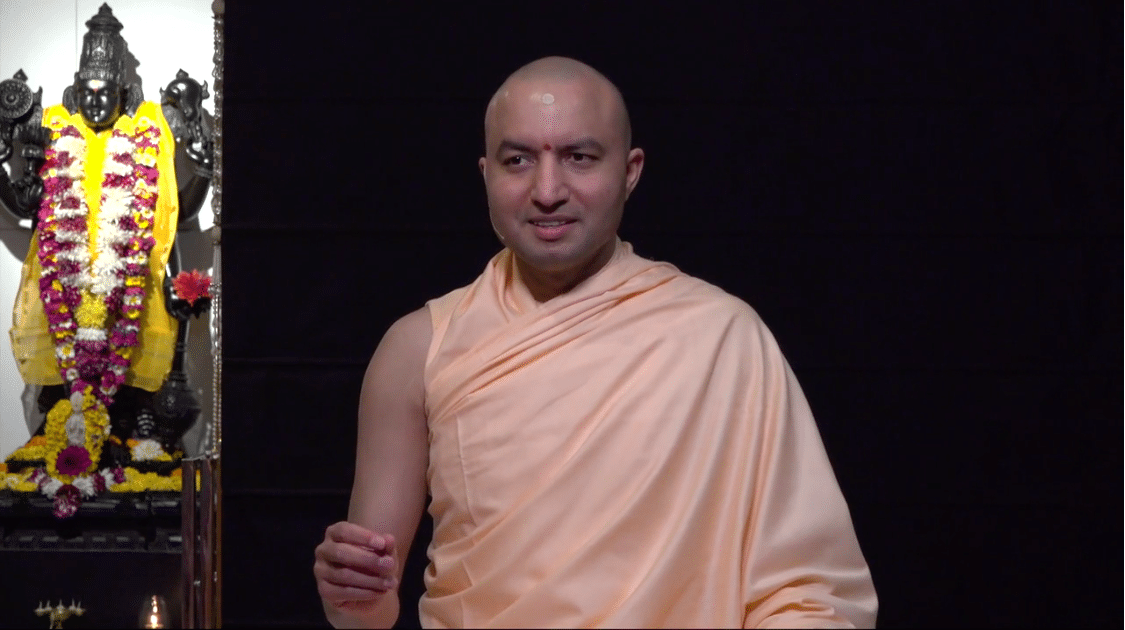 04:43 – 10:56 : So, in the previous two discourses, we were discussing on how does a person attain Siddhis. One way is : A person does so much Sadhana, so that he/she attains great concentration and focus, so that, he/she becomes “One” with the energy flowing in this Universe. Because, that knowledge is Sattvik (in the mode of Goodness),

Understand that knowledge to be in the mode of goodness by which a person sees one undivided imperishable reality within all diverse living beings.

The knowledge which separates(विभक्त) the person from God, that is Ahamkara (False Ego) only. We think, “I am different. My body is different. You are different. He/She is different”. Because of which, we interpret the words  “Me, Mine”, and “You, Yours”.

The feeling of ‘I’ and ‘Mine’ and ‘You’ and ‘Yours’ is Maya (Illusion), which holds sway over all created beings. Whatever is perceived by the senses and that which lies within the reach of the mind, know it all to be Maya.

And because of that, I had told you that the first step in the Attainment of Siddhis was Satyanisht hona (Being Truthful) – True Expressions, True Words, and True Conduct. Neither the Emotions are false, nor the Behaviour is false, and nor the Words are false. Second pillar was Mann ko nirmal rakhna (Keeping the mind serene and compassionate). A person who has a Serene and Compassionate mind, not only is he/she sitting near God, he/she is almost God only! Compassionate speech, Compassionate mind and Compassionate behaviour. A person who lives in such sentiments, that person can heal people, he/she can, to some extent, interfere in the Karmic Account of other people, and that person can change the life of other people. That person’s Aashirwaad (Blessings) and Shraap (Curse), both have power.

One type of Blessing, you get at the bus stand, if you give someone Rs.20. One is that. They would give you loads of blessings, which makes you feel as if you don’t require any other thing! And, if you don’t give them money, then it may happen, that the same person abuses you! Neither their blessings have power, nor their curses. Because, only that person has power in his/her blessings/curses, who has a Nirmal Mann (Serene Mind). Just like, a person who has money in his/her bank account, if that person writes a cheque, it will become cash. If you don’t have balance at all, you can write as many Cheques as you want, it won’t mean anything!

But, the thing worth noting is, if a person with a serene mind does such a thing, then it will also work! क्यूंकि उसका वचन ही परमवचन हो जाता है (Because his/her words become the supreme phrase)! Somewhere or the other, it becomes Nature’s words. At its proper time, it will definitely come true.

So, I have kept four pillars of Siddhi, “four” because four sounds good! On two pillars, a building can’t stand as good as it stands with four pillars. And five would have been two much, and since I had only four weeks, hence the number “four”. There are four Gunas (Modes) – Sattva (Mode of Goodness), Rajas (Mode of Passion), Tamas (Mode of Ignorance) and Gunateet (Beyond all modes). And, there are only four states of soul- Sushupta (Deep Sleep), Jagrita (Waking), Swapna (Dream), Tureeya(Beyond all states). Hence, there are only four pillars. First is “Being Truthful”, second is “Having Serene Mind”, third is “Being Truthful plus Having Serene Mind”, and the fourth is “Having Serene Mind plus Being Truthful”. (Laughter). But, if this seems too difficult, then I will change the third one for you.

So, the third pillar of Siddhi is, “Seeing Food as a Yagya (Sacrifice/Offering)”. That is, “You are able to see Food as God”.

The Power of Your Subconscious Mind in 400 Words!
Kids and Mom