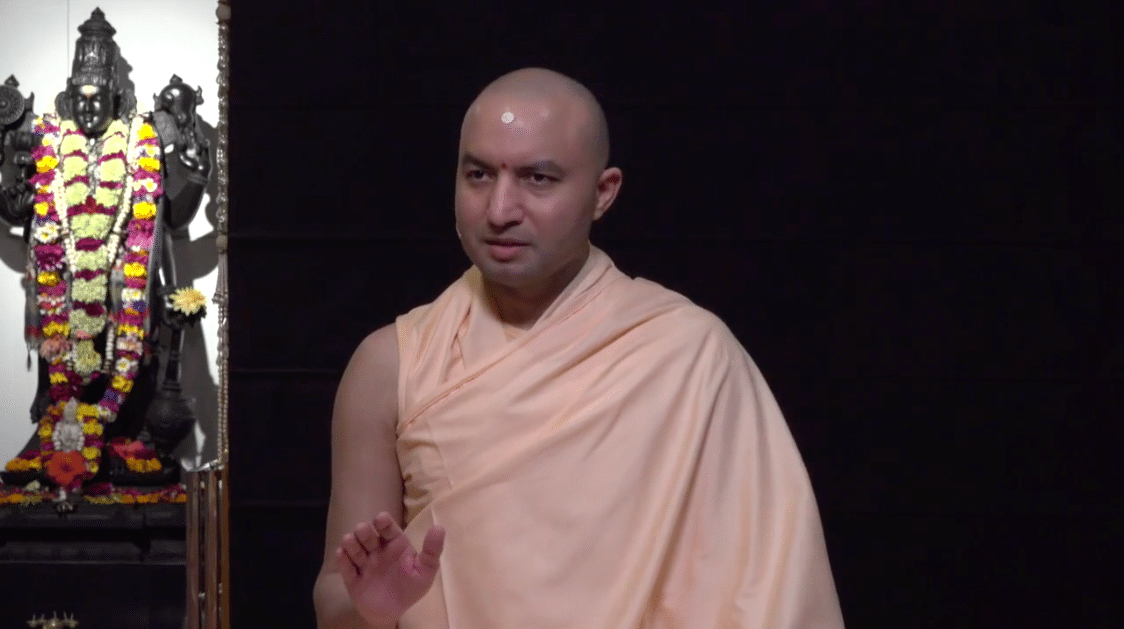 From my Purvashram days, I used to say, “God never lives in a small heart, and never leaves a big one”.

11:04 – 20:45 : What does a palace mean to God? Ksheersagar Sambhutaam ie. MahaVishnu who is sitting in the ocean of milk, for Him, what can be a bigger ocean than Mind? Nothing! The waves of emotions, thoughts, wishes and karmas will keep on flowing in the ocean of mind, but below that, on a surface where there is peace and silence, resides God. You will never find fishes swimming on the surface of ocean, they are always found beneath. An entire world is there in the depths of the ocean, because there is more stability there.

Once, someone asked Ramana Maharshi, “What is Self-Realisation? How can I experience that God in me?”. He replied, “When you breathe, after full inhalation and just before exhaling, there comes a moment when everything stops. You have to reach there.”. It was probably Ganpat Muni only, who asked Him, “Who Am I?”, to which He replied, “You will get the answer to this question when you will be able to sit in that stillness”.

The third pillar I had told you as भोजन को यज्ञ के भाँती ग्रहण कर पाना (Accepting food as a divine sacrifice). This is such a simple thing, and at the same time, it is highly influential, you can try this anytime. When you sit to eat, then accept every bite as a divine offering, as if God is digesting it, by becoming the Vaishwanar agni (Stomach Fire).

Food should be eaten as if there is no hurry at all, because all the hard work is for food only, right? There is no hard work needed in imposing afflictions, that happens automatically! (Laughter). But, for food, you have done all the hard work and persistence. So, when you sit to accept that food, then it should be taken as a Prasaad (Holy food). Or, you can eat as if you are God, and you are accepting those offerings. If you do it this way, then eating food would become a Sadhana (Spiritual Practice).

I had given you the example of a dog and a cow. A dog eats quickly by doing “lup-lup-lup-lup”. (Laughter). No matter how full his stomach is, he always eats in a hurry! On the other hand, we have a cow, who takes a mouthful and keeps on chewing it for the entire day! She isn’t in a hurry at all. But, you all please don’t eat at such a slow pace. Eat food like a human.

वो क्षमता कि आप हर कौर खाते समय इश्वर का स्मरण कर पाएं, ये केवल मनुष्य को ही प्राप्त है (The ability to remember God while eating every mouthful, is only available to human beings)! So, why not use this opportunity to the fullest! Which news, which movie, which mystery of the Universe will you be able to explore while eating your food! At that time, at least eat your food in peace. It will get digested properly.

If you are at peace, when you eat your food with a silent, happy mind, then 50% of the diseases of the body would be dispelled automatically.

If you become truthful (first pillar), and have a compassionate mind (second pillar), then 50% of the mental diseases would be dispelled automatically.

So, what is the fourth pillar?

You may be knowing, even if we are doing a normal Yagya (Fire Offering), in that also, most of the offerings are those which a person eats! Grains, Nuts, Sweets, Naewedyam, all of this is offered to the Yagya Bhagwaan.

A human body is nothing, but food only! Whatever you have eaten, it has become food. An apple which was hanging on the tree, you took it, washed and cleaned it, and ate it. Now, you have “become” that apple! Where has that apple gone? Whatever food we consume, we become that. जिस भाव से खाएंगे, वैसे हम बनेंगे (The sentiment in which we’ll eat, we will become like that)!

So, the fourth pillar is : दुसरे के अंदर, इश्वर को जागृत कर पाना। (Awakening the God inside the other person). Once again, it is very simple, but it will have a deep impact on your consciousness, as well as on the consciousness of the other person! So much so, that it cannot be put into words!

In Ramacharitamanas/Ramayan, everyone has read/heard the story, that when they had to cross the ocean in search of Maa Sita, then everyone thought that even crossing a river is difficult, what to speak of an ocean! How is it even possible to cross this vast ocean, and reach the island. So, what did Jambavan ji do? Jambavan just awakened the energies of Anjaneya (Hanuman ji) which lied in a dormant state. “O Anjaneya, you don’t know that you are extraordinarily powerful! What to speak of an ocean, when you can cross the entire Universe! Once, what to speak of any mountain, you got ready to eat the Sun god himself!”. That state, you can pick up any Shastra/Purana, whenever the Devas (Demigods) wanted to get some task done from God, then they always used to glorify Him, and sing Stuti (Praises) for Him. The God inside the other person gets awakened!

In those times, when the deity manifested and talked to humans, it was because of Stuti only! Whether this act was performed by Daitya (Demons) or Devas (Demigods), the Deity doesn’t care.

Sometimes, we forget how much grief we are giving to the other person, by means of our words or our Karmas. कई बार मनुष्य अपने अहंकार में इतना जी रहा होता है, उसे इस बात का आभास तक नहीं होता, कि मैं किसी को कैसा महसूस करवा रहा हूँ (Many a times, a person, in his/her ego, does not even realise how they are making the other person feel)!