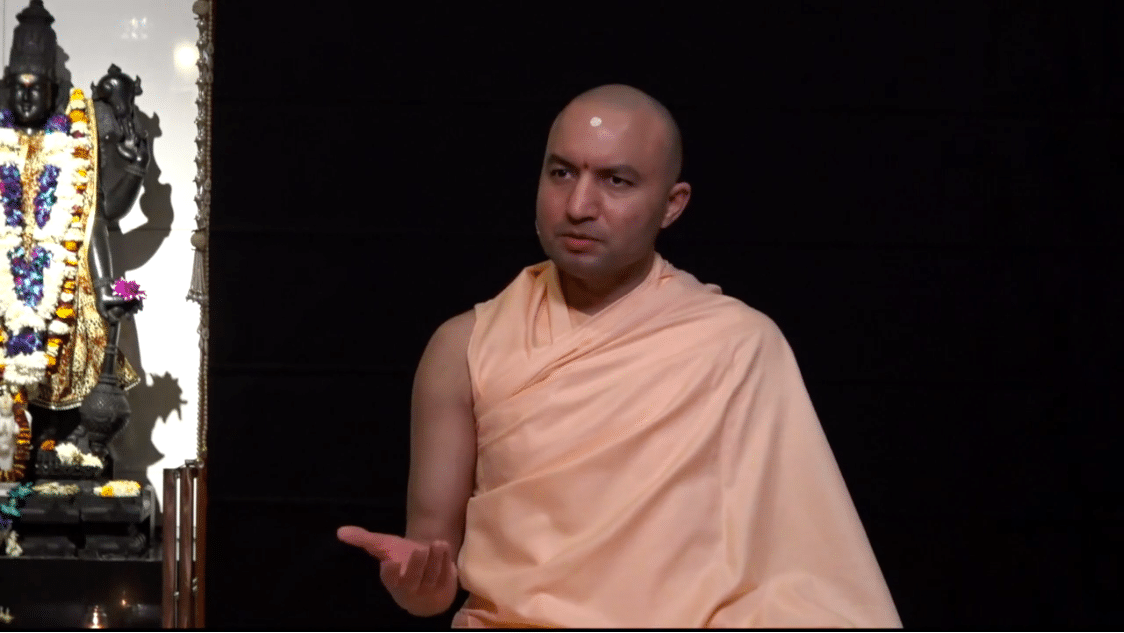 16:03 – 21:41 : Siddhi is like : When you, firmly established in your sentiments, say things to the other person that “This will happen in your life”, then the entire Universe gets active to accomplish that!

Siddhi is “Knowing what is going through the other person’s mind.”. Not that you can know his thoughts word-by-word (a lot of times that also happens), but you get the gist of it in sentiments. Just like a doctor who knows what ailments the patient is suffering from, as soon as he/she enters into his room.

Siddhi is “Being able to listen to talks from far away.” And, in this respect, the only thing which I want to say is that, it’s not like a telephone, that whenever you dial, you can hear everything. Not like that. But, if some talk has happened, don’t know from where, but it will reach you. And when that person meets you the next time, whether he/she says or doesn’t say, you have already heard it! And Siddhi is not just about listening or sensing distant talks, but with such an intensity, that you feel that “Doordarshan (clairvoyance) has occurred”, that you have seen what was going on there!

Siddhi, if it is seen from that point of view, then it exists.

Siddhi, of self-power/self-discipline, exists. That you can live without food for 6 days, or 7 days, or 9 days or 10-15 days. But, in that, somewhere Yoga comes in. If a person slows his/her breath, then he/she can live without eating, for longer durations of time.

But such Siddhis don’t exist that “You chant a mantra, and a palace manifests in front of you”. Such Siddhis don’t exist. And this, I am telling you all, not just from my personal experiences, rather, this is the Complete Truth. If, after knowing this truth, a person walks the path of Dharma, he/she will stay firm on it. No one can deviate such a person.

So, all those youngsters and even elders, who after reading certain books, feel that their home is a bad place, if someone tells them that Siddhis don’t exist, then they immediately think “This fool doesn’t know a thing!”. This is the opinion which they carry.

After reading such books, the biggest problem which manifests is that “The person starts considering himself/herself as highly learned!”. If the person in front gives him/her a scientific logic about such things not existing in reality, then he/she laughs, internally thinking “See, how big a fool this person is! He doesn’t even know that I will, one day, fly in air!!”. (laughter)

And the reason behind it is that our elders and even saints and other people, kept on talking such things. Example, a saint was sitting on a wall, and a person was approaching him. The saint sitting on the wall said to the wall – “Go!”, and the wall started moving! Now, hearing this, a child starts imagining certain things like, I will also one day serve such a saint.

And 90% of the saints, if you visit them, they will attack you with loads of questions – “From where have you come?”,  “What job do you do?”, “How much do you earn?”, “Who all live in your house?” etc etc. You can try it anytime! This behaviour has no relationship with Dharma at all.

And, to be honest, I had never thought of giving a complete discourse on this topic. But, last time, suddenly that talk began from the topic of food, then I thought that this mystery must be known to you, that in reality, “What Sadhana really is!”.

That what is that Sadhana, by doing which, we can attain the Siddhis which are possible to attain! Sadhana is not just chanting, chanting is just one of the forms of Sadhana.

21:42 – 23:14 : So the most important foundation of Siddhi is “Satyanisht hona (Being Truthful)”. Because, to be truthful, you have to come into a state of equanimity.

But, if you say something, which you yourself believe to be true, then that won’t count as a lie. Even if you were unaware of the truth. Because you only said those things, which appeared to be the truth to you.

And there are three kinds of Lies :