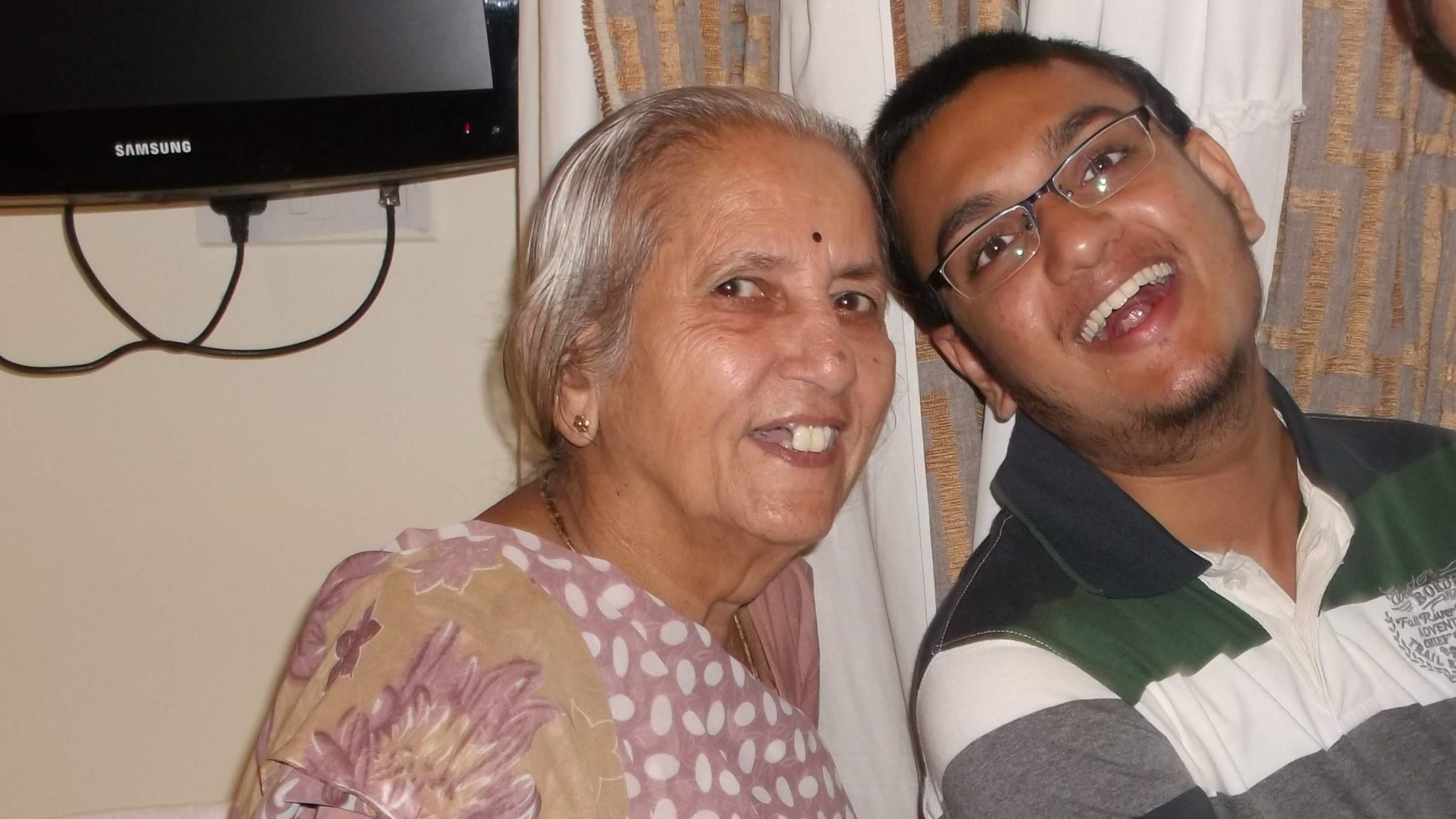 You are the nearest and dearest to my heart

As I read the editor-in-chief’s last editorial in February, I exactly knew what my next post would be about. I cannot think of anyone other than my paternal grandmother as an apt subject to write about for a post dedicated to Women’s Day.

As you may be aware that ‘baa’ means grandmother in Gujarati. Her name was Manjulaben, born in a village called Haldharvas (the bearer of plow, Kheda district. I do not know much about her early childhood, just that she was literate enough to read and write Gujarati and that she was the eldest girl child amongst her seven brothers and sisters. She had probably studied until Grade 7, as evident by her frequent saying, “Saat chopdi pass”.

She was married to my dada (paternal grandfather), Ramniklal, when she was almost 20. There was a considerable gap between the two, perhaps 10 years. After marriage, they had shifted to Bhusaval, Jalgoan, Maharasthra. Hence, she knew quite a few Marathi dishes as well. Among others, my sister’s favourites are ‘Marcha No Theso’ and ‘Besan’; the former is a variant of chilli-garlic pickle, while the latter is a curry.

Now, coming to her days of business. My Grandfather was not very serious about their sons’ upbringing and would be away most of the time. So, Baa had sensed the need of importance of earning. She had also seen other young men getting spoiled by bad habits of paan masala and stuff. She was worried about the future of her three young boys.

Thus, she became the first female entrepreneur of Haldharvas by opening her own provision store named Chetan Provision store. Yes, they had shifted back to Haldharvas, and my dada always used to be out as he was in a construction company. Baa would hire a Tempo rickshaw in Ahmedabad and load it full of stuff from the wholesale markets in Ahmedabad. She used to tell me that she would keep almost anything in her shop, from seasonal to everyday essentials.

She used to sell at such a competitive price that once the other shopkeepers complained about her to the village chair. They complained that Manjula is selling at very affordable prices, which they can’t beat. The village chair told them that she has her right to sell at whatever price she seems fit, and hence, shut everyone’s mouth. Through hard work and never-to-give-up attitude, today, her children are all well-established.

She also had a Muslim helper in her shop, which she used to call Dulya. She always reminded me of him and how he would wish her every morning Jay Shri Krishna, even though he was a Muslim.

Once my dad, being the eldest of her sons, got a job in Ahmedabad, and my elder sister was born, my dad asked her to wind up her shop and move to Ahmedabad permanently. At that time, hers was one of the highest-grossing ventures in the entire village. But she was happy to retire, as after all she has worked for her entire life to see that this day comes. From here starts her spiritual journey.

I must say that Baa was a diehard foodie and would frequently recall her favourite restaurants and ice-cream parlours to me. She would never miss having a meal at Azad Halwai during her business trips to Ahmedabad. She also loved ice-creams and her favourite was also the Indian chai.

I am saying this as on her spiritual journey she decided to not eat anything from outside, and no onion or garlic as well. This was even before my dada had passed away. Even imagining such a resolution is difficult for me, but she managed to keep that vow until the last breath. She ate only home-cooked meals which were first offered to Lord Krishna.

After my grandfather passed away, she wanted to endeavour more on to the spiritual journey. So, she decided to stay alone. She had made her home storage for all the donations from the Haveli she used to be a member of. In the Pusthimargiya customs, we do not call it a Mandir but a Haveli that is God’s own home.

All the donations which would come to the Haveli were stored in her living room, including grains and pulses, dry fruits, and whatnots. She became the manager of organising Satsang’s or paths at one or the other Vaishnav’s home. She dedicated the first half of the day to do the Sewa at her home and the next half, to the Haveli. She used to do sewa at home till 2:00pm and then leave for Haveli at 4. There, they used to make flower garland for God, while doing kirtan.

She had also done so many solo tours at spiritual places in India, like Tirupati or Madhura Vrindavan, or numerous months at Nathdwara. She managed all this without a cell phone.

Later, when she was diagnosed with Parkinson’s, my dad forcibly asked her to move with us. From then on, she lived with us.

If not for her, I would have not had a single seed of Bhakti or affection towards God. When she used to finish the Shringar of Krishna, she’d call me to have a look. I vividly remember that she always asked me one particular thing, that is he laughing or not. And I, being mischievous, would sometimes say yes, but on other occasions would say not so much. Then she would ask Krishna that what happened? Did you not like the dishes presented to you today.

She didn’t have a single grain of doubt in her mind that what she is doing day in and day out to an inanimate statue is worth it. She had true devotion for God, but never fell for the tricks that Krishna drinks milk, came and ate her food, et cetera. She would always tell me a story that the day when God actually starts consuming your offerings, from that day, very few will actually continue offering him.

She always had her bag full of stories, sayings, and Gujarati idioms and phrases. My sister and I would insist on her to tell us stories. Most of her stories would involve Lord Krishna, Mahaprabhuji, or Vaishnavs.

I remember the feel of her hands on my face. She always used to clean off the cream from the milk pot with her hands and then rub the cream over her hands. I do not remember her using soap often, though her hands are the softest hands I have ever felt. When I would not be feeling good, she would insist on doing a hair oil massage. And no amount of expertise can ever replace her hair massage.

Baa passed away in April 2018. Even when she went, some of the things happened, which were unusual. I was not able to make it to her funeral. I reached late, while the cremation was already done. The next day a pigeon came and sat on Baa’s temple and would continuously stare at me. My mom later said that they have never seen a pigeon in the house. I folded my hands and jokingly said to the pigeon, “Baa, you have seen me, now please go!”. How many shooshes we had done before, but it won’t go, and as soon as I said this, it flew off.

The next day, I saw clear footprints of the same size as my grandmother’s on the terrace where I had offered kheer poori to the Crow. I want to be sceptical and not believe in the supernatural, but there is also a small voice in my head, which says, what if these are not coincidences.

I have so much more to write about her, but I am already above the word count. Baa was a strong-willed, independent woman. There can never be anyone like her. You are and will be the dearest and nearest to my heart. The philosophy of your life and your teachings will always be with me.

Let’s celebrate the feminine today— happy Women’s Day to all.

To Baa,
Yours,
The Math Guy.