Chit/ चित् /The Pure Consciousness is of the nature of absolute Knowledge.  This is the Self-effulgent/self shining Knowledge principle. It is called the chaitanya/चैतन्य.

(Remember,  Sat, Chit, Ananda aspects are not distinct from each other but these are coeval and coexistent with Atman.)

We will learn now, how The Knowledge of any object takes place.

Be attentive… The wave or a whirl-pool of thoughts is called vrutti/ वृत्ती which arises from the mind. What is its function?
It removes the veil of gross ignorance/ स्थूल अविद्या that envelops the object ( like the removal of pot over the glass in the analogy) it is called  आवरणभंग.

When you pass through a big crowd or persons, you are able to notice a few persons. You do not see some persons, though they happen to come in front of you. Because there was not complete आवरणभंग. When this done, then the object shines before you with the help of flashlight.

Where is the flashlight??? It is the Chit/ Consciousness (aspect of the Self), reflected in the mind by default.
Normally all our thoughts go through two processes-

There is a bottle on the table. how do you know about it? Mind ( in the form of vrutti or thoughts) goes through the sense organ ( eyes) towards the bottle and pervades it,  taking the shape of the bottle.  Just like the water takes the form of the sponge when poured.( removes the gross ignorance) The Self (Chit aspect)  illumines  the vrutti which has taken the form of the bottle. This information is conveyed to the intellect and the knowledge  ‘ I know the bottle ‘ takes place. It is stored in the chitta/ memory for the future use.

Just the vrutti/ thoughts cannot know anything because it is inert and insentient. It is the self/ Atman/ Chit aspect which gives it the sentiency. Where ever mind goes, Consciousness/ chit is there. you already know about this , that  Self / Atman gets reflected in the mind.  Thus knowledge of any objects takes place in the antahkaran. ( mind, intellect, memory, ahankar) with the Self as the substratum/ base the illuminator( Chit aspect of the Self) 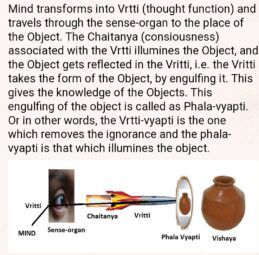 This is how the Consciousness/ Chit aspect of the Self is called the absolute knowledge principle.  Because of it only we are aware of ( we know) the world.  This is all about the knowledge of the external world of things and beings.

It is the same for our internal world. ( thoughts, ideas, emotions,  etc). We are aware of our thoughts. Mind need not go outside through any sense organs to know it. The Self reflected in the mind directly illumines the thoughts/vrutti. This is how we get the knowledge that ‘ I am hungry’, ‘ I understand ‘, etc.

Thus Chit/चित् or pure Consciousness aspect of the Self is that which illumines whole the external  as well as internal world. Without which , I cannot know anything.  This Chit is my real nature. I am aware of my mind and it’s thoughts. I illumine all my thoughts while remaining different from them. I the Chit, illumine  presence of my thought as well as absence of thought. Thoughts come and go, but I remain unchanging and evershining. Self effulgent  means it shines by itself unaided by any other light. We commonly  speak about the Consciousness.  ‘ I am conscious about…’ , ‘ he is not in Consciousness’, ‘ she is unconscious. ‘ etc. ( This is the only part of the Absolute Consciousness)
Remember, the Chit/ pure Consciousness is the substratum.  It is Self-effulgent,  upon which all the drama of mind, intellect through the body is taking place. Chit just illumines all. Even if one is in coma or anesthesia, ( we usually say it  as unconscious),  Such people are still labeled as living although unconscious because Self /chit aspect is ever there to illumine and enliven. It is when a  person dies, subtle with causal bodies leave the gross body and  reflection of the Self also goes with it, leaving the gross body as just a matter/ जड/ dead.

Can you differentiate two types of sentences?

I know the book.

I know that I know the book.

‘I know the book’ is the knowledge arised in the intellect with the information conveyed by the mind gathered by going outside through the senses( off course with the Chit/illuminator). But then you are aware that you know the book. This awareness is the Sakshi chaitanya/ witness , Chit/the Consciousness.  Which remains in all states , and even if one is in coma or anesthesia.

We will  learn the Bliss aspect of the Self in next part.