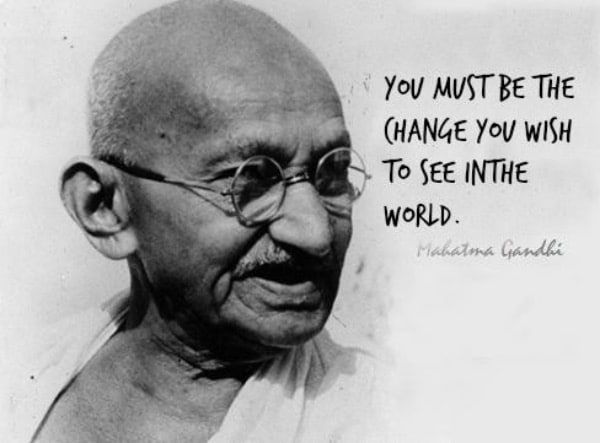 Be the change you want to see.

The CoVid situation in the country has reached a stage where we need to stop asking why and start saying why not.

Among the quotes of Mahatma Gandhi, this one influenced me the most. And its meaning, stays relevant even so long after he said it:

You must be the change you wish to see in the world.

As we see the increase in number of cases and deaths across the country, there are more and more opportunities that are being thrown at the people who are not affected. Opportunities to say something, do something, try something: Opportunity to initiate the change.I had a surreal experience this morning, which shook me to the core.

A school friend had suggested on the school group, that we should do at least one act of kindness (help someone in need, especially someone affected by CoVid). While the group members encouraged his own deed, no one else shared more examples of kindness. Then he reached out to me separately this morning. I was embarrassed to tell him that I had not posted anything, as I did not do anything. He said, even a simple act of wearing the mask when you go out and/or asking someone to wear it, is also counted.

Then I got a message in my college group. A friend in US was asking help for his cousin in South Africa. The cousin had lost his dad this morning and was looking for help for crematorium in Delhi. A typical case one would read and ignore, as it was no one close. But humanity does not depend on bonds. I just felt like I should help. Posted the message in another group of Intel ex-colleagues and immediately got a contact and forwarded the same to my friend. It was feeling of a small victory, felt that I did make a ‘small difference’ to someone. And this required so minimal effort at my end, really.

And there was more:

The goodness does not end there. Seeing my prompt revert to this friend, another friend messaged me for help with his CoVid infected In-laws in Delhi, who were looking for Oxygen. Another chain of messages and I was able to provide some contacts for the same.

In both cases, the actual result still takes time, but today, the need to do even this basic connect is very very important. There are scores of people looking from something as simple as Oxygen refill all the way to O2 Cylinder, Concentrators, Hospital Bed, ICU bed, Plasma, etc. There are even instances where someone is able to procure Cylinder, but does not have regulator. There are people, who, because they are not able to get the bed in hospital, are seeking Oxygen at home, but the cylinders are being prioritised for hospitals, as it impacts more people.

A fund raiser started just 8 days back on a fundraising site, which had initially targeted 5 crores, has already raised more than 30 Crores now. And there are dozens of such campaigns. Even to share information about such campaigns, especially people willing to donate, but might not using social media and may not be aware of such campaigns, its also an act of kindness.

People have given up their full time jobs and working 24*7 in helping other people, being part of fundraisers, running their cars as ambulances, etc. There is absolutely no dearth of opportunities for goodness.

The Power of One:

When you consider doing something in a catastrophe as big as this one, one may make the mistake of undermining oneself. The feeling of “What can I alone do anything.” is a natural one many times. But anyone who has heard the ant and elephant story, knows really well what even a small ant can do.

This is not about me. I have literally done nothing. Its about US. We need to stop talking and start doing.

Stop Asking Why and start Saying Why Not.

The Chitragupta Story about Karma
Sunday Musings With Dad