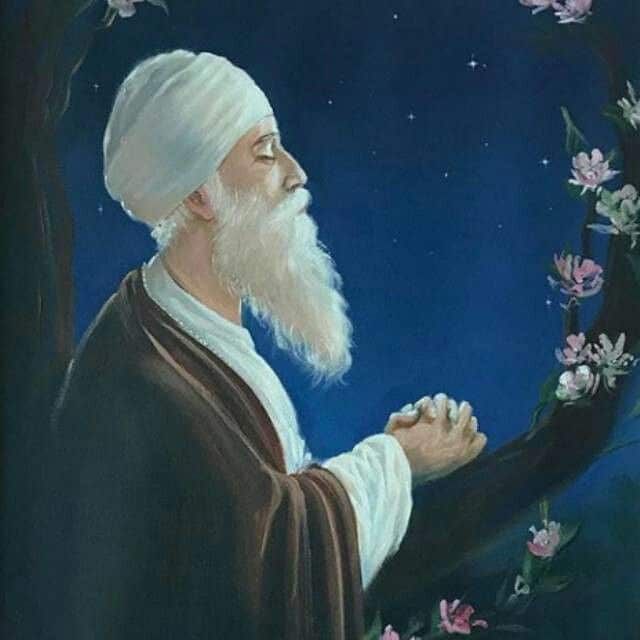 To remove this darkness,Guru Nanak has come to this world.

Music stopped ,my father again requested my Beloved’s beloved to come to the palace but he said: We are happy here in this hermitage,where our daughter has been reciting the Lord’s name.

By my hesitatingly saying and my parents requesting again with folded hands,the Guru agreed and came to the palace.

For us, it was a wondrous delight, happiness,joy and gleeful fervor.

What should I say?Our entire vision changed.Our entire life changed.

The ecstasy that was there in being at the service to Guru was something that we only knew.It is difficult to express that ecstasy in words.

Till today ,I didn’t know what was happening? Who was pulling me ?

Where was I going? Now I came to know everything.

Although without all this knowledge,the seed of spiritual life…. The Lord’s name that my Beloved had planted in me had grown and blooming right but after actually knowing everything ,one had the real satisfaction.

Now I come to know that my Beloved’s beloved is GURU NANAK DEV.One day,my beloved had mentioned this name ,but the stupid that I was,I didn’t remember.

Today I came to know that the person playing the rebeck was MARDANA,Who is the Guru’s companion and the Guru’s musician.

A few days before ,the persons who were singing and looking for the Guru,were ..

They had gone to Kartarpur to meet the Guru.They were informed by Bibi Nanaki ( Guru Nanak Dev Ji’s elder sister) that Guru has gone towards the river Chenab.They were trying to locate and find him.They knew that the Guru had to come, because the Guru had been told of the death of Bhai Triloka (my Beloved) and my longing to meet the Guru.

Guru Nanak Dev Ji’s sister Nanaki was sure that since the Guru has gone towards the river Chenab, he would surely come to bless me.

The Guru’s sister Nanaki had felt this in her meditation.

All of them had come to meet the Guru,and deliver a message from sister Nanaki that the Guru will come and meet them.The Guru came here to make true the words of his beloved and bless us.I adore at the feet of the God like Guru ,who said to his disciples: Nanaki is my sister but this blessed girl is like my daughter.

It was wondrous to see,how he was bestowing his love on me,who had shot his beloved.

All the time,I was in so much thankfulness to the Guru.

Now, I came to know that in our kingdom,there had been  living Disciples of Guru Nanak who were blessed by him. Who knew that such gems were hidden in our kingdom?

They had their own holy congregation,and my beloved had come to meet them.

Seeing a nice, beautiful, peaceful place my Beloved sat down in meditation,in deep love of Lord,when my stupid hands shot at him.

His name was Bhai Triloka and he was son of old man Bhai Bhagirath (Guru Nanak Dev Ji’s disciple).

The Guru loved him very much and by blessings of Guru he had got realisation in a very young age.

The day,when my hands shot at him,he was not even twenty-two.

NToday,I came to know that whom I shot at,has given me life from LIFELESSNESS.

The old man Bhai Bhagirath,whose son I shot at,is treating me like a daughter and says,it was God’s will and has no ill will against me.

The Guru,the redeemer of sinners,whose loving disciple in that Young age,was shot by me is calling me a daughter.

That’s why the Guru’s Disciples call each other as brothers.They have all the love.They don’t have any feeling of separateness in them.They don’t discriminate between rich and poor.They have unlimited forgiveness. How good is this holy congregation?

I was much absorbed in my pleasure and I never knew that there is something like suffering on this earth.Now, I came to know that the world is full of suffering.People are in distress. Everywhere is evil doing.It is darkness all over.

To remove this darkness,Guru Nanak has come to this world.