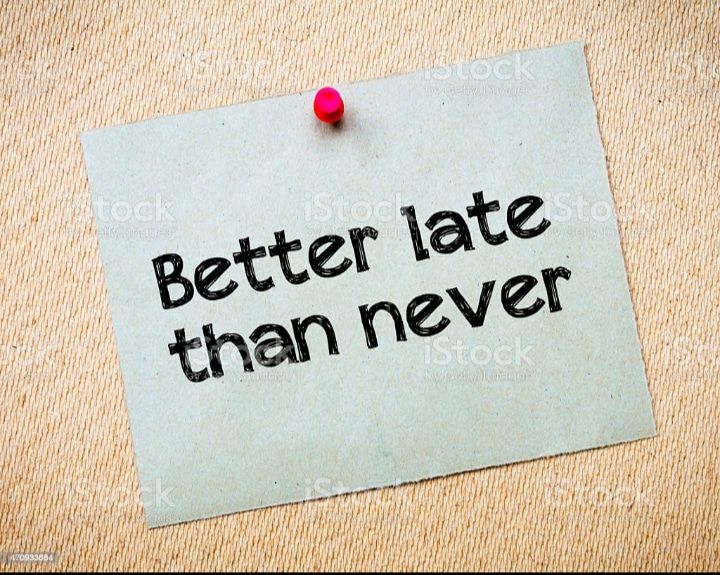 Some things came to you late, but late was better than never

Do you all think it’s the right thing??
No, it’s not right. It’s essential to complete the work on time but the more important thing is to complete that work at any cost which means that it is all right to be late in completing an activity than never doing that activity.

This proverb can better b explained with an example. You all must hear a story of a rabbit and a tortoise. Once upon a time, a tortoise and a rabbit decided to complete a race. As we all know the rabbit is a faster running animal whereas the speed of a tortoise is very slow. The rabbit was very confident that he will win the race and the tortoise also knows that he is very slow so maybe he will lose but still, he wants to try once as he completely knows the meaning of ” Better Late Than Never “. He thought that what’s the problem in trying if he lost he will not have the regret of quitting.

They started the race. After a few miles, the rabbit turned back and saw that tortoise was completely out of sight. He thought that the tortoise will never win the race, So he decided to take a nap. While he was sleeping tortoise surpassed him and won the race. Because of the ability to run fast, the rabbit was going to win the race. But the tortoise very well knew the importance of the phrase “Better late than never” and thus it started competing slowly, and steadily and won the competition.

Thinking that it is impossible to complete work on time will result in the work being never completed because it was not even started in the first place. It is human nature that when we notice that work is difficult we simply decide to quit, what is important here is to understand the fact that quitting should never even be considered as an option.

How Os.me Empowered Me
Language: A Superpower