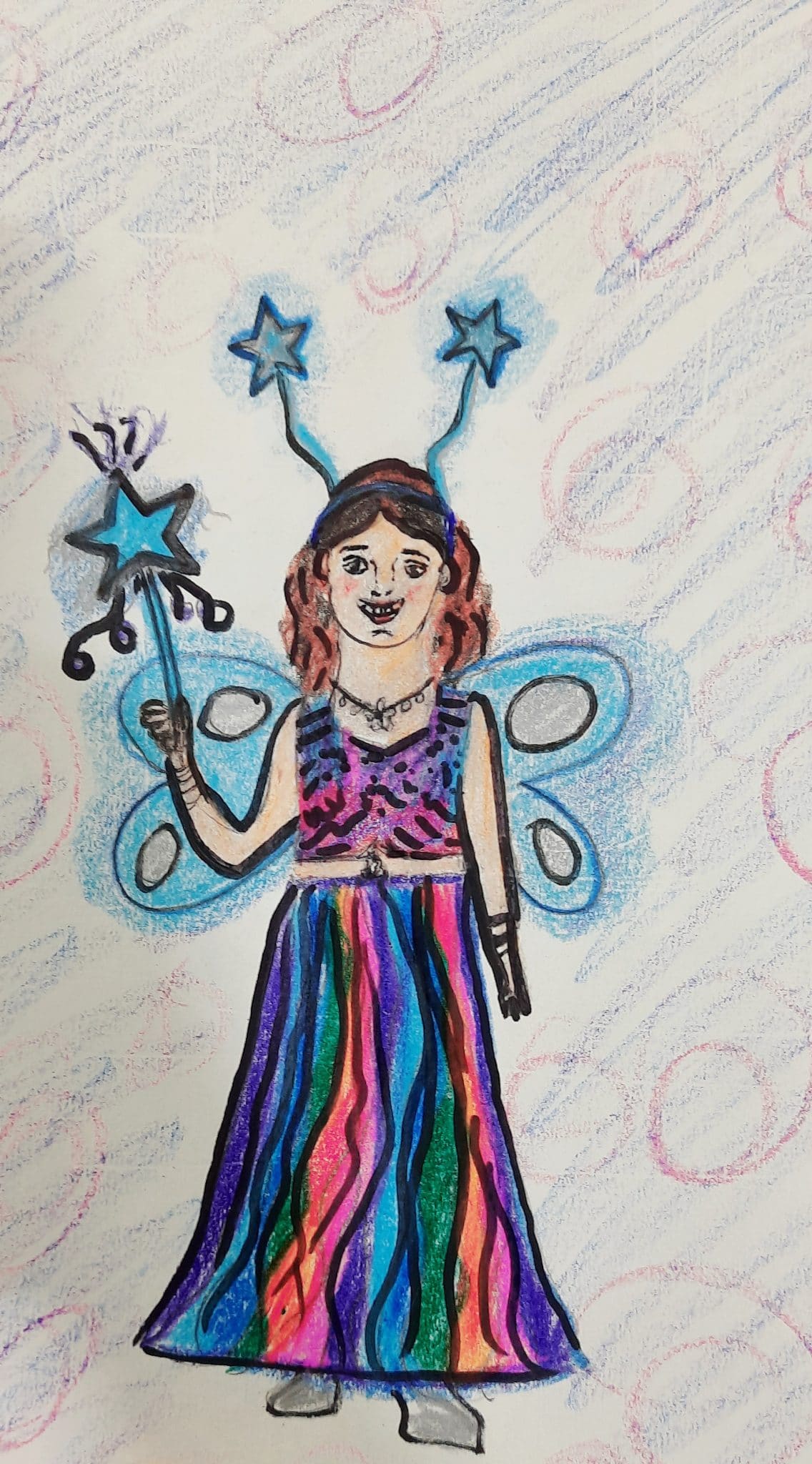 This incident you are going to read is of my seventh birthday when I was in class second. It was a hot July summer day, when both my masis came from the bazaar and with great excitement gifted me a present packed in a beautiful wrapper.

It was a Lehenga. Multi color blouse with beautiful and delicate hand embroidery all over it and a multi colored bottom skirt of a wrinkled fabric. I loved the present so much which I had to wear on my birthday which was just two days ahead.

My birthday has arrived. I don’t really remember the first half of that day but couldn’t forget that evening. As the clock hands hit 4 o’clock which was the time when the tuition students used to arrive at the tuition center that was well run by my both aunts, my younger masi called me and said, ” Meera! It’s time to get ready! Students have started arriving,  you know na what you have to do?!” I gave her a high five with a broad cheerful smile and ran towards the room where my sister was watching TV. I told her that please come and help in getting ready as Students have arrived. She switched off the t.v. which was very unusual for her and took me to the store room, which was much like a closet with everyone’s cupboard placed there but we somehow called it store room.

Anyhow, she changed my clothes from casual to birthday embroidered lehenga and silver heels( I don’t remember the heels but just putting them on for fun😉). And the best accessories which were my favorite were the butterfly wings, a fairy wand and a hairband with stars on the top, which fluttered because of the springs attached at their bottom. These little, shiny things attracted my attention. After fixing and attaching everything at its place. My sister put the bangles in both the hands. Then she opened my masi’s cupboard which was known for its exotic makeup products like lakme golden shimmer powder, a jewelry box which opened with music and a figure of couple danced on that music, perfumes, necklaces and the list is endless. Although a shimmer was not in our plan but my sister said you would look pretty with it, so while she applied some golden powder full of sparkles on my face with her little hands, I closed my eyes with a broad smile showing my broken teeth with a few milk teeth left.

Me being a shy kid, was feeling hesitant to go out in front of all the tuition students for birthday celebrations that were held for me by Masi. But somehow I gathered my courage and entered the big hall  room where students were sitting and studying. Everyone wished me happy birthday and the whole room was filled with love, well wishes, all the pampering and some laughs on the excessive golden shimmer sparkling on my small round face. Then I distributed toffees to everyone sitting in the room with my spring hair band and fairy wings which gave me the feeling that as if I am an angel and everyone here were waiting for me only🤣🤣  I think this was most probably because of the side effect of over watching  Son Pari in those days.

In those days my both parents were struggling hard with their dream project of a School. I think they have just started it and they might also have some students who got newly registered in their school. So in order to pick up these students from their homes, my parents bought a second hand Omni van with little money they could afford. Luckily they brought that van home on the day of my birthday. And as Indian people love to relate different things and make them the part of superstitions on which they can then ponder over. My parents did the same, they said that they  were planning to buy a van but they couldn’t afford the said amount and it is only because of their little child’s birthday that they have got it to buy at a reasonable price. So they gave me all the fancy titles of a lucky charm, Lakshmi, saraswati, etc. ( I respect these goddesses but I think they must not be respected only at the time the business has flourished or we have got a promotion, it is underrating them). Never mind.

So I jumped into the omni van to sit on the front seat with my papa who was going to drive it and my mother and sister who decided to enjoy the ride by sitting at the back only( four people were not even able to sit at the front even if they wished to😜). Papa gave us a long drive which I enjoyed a lot. I was sitting with my wings, wand and headband worn on with lehenga and feet that were not able to touch the floor of the van. I had opened the window and looked at all the places, we passed by like I would have seen them for the first time.

Now the most amusing part of this anecdote was that the very next day when my parents started the Omni van to get it to their school for the first time, it’s engine was not starting. My father tried to start it again and again but all the family members who were standing there as spectators could only hear the rumbling sound of an engine. I thought that my lucky charm got expired on that day. I was sorry for it. What happened next is what I don’t remember.

Hope you all enjoyed it. Lots of love and laughter ❤💕🤗🌻🙏🙏


Login with Email
No Account? Create One
Dilemma
A Beautiful Promise