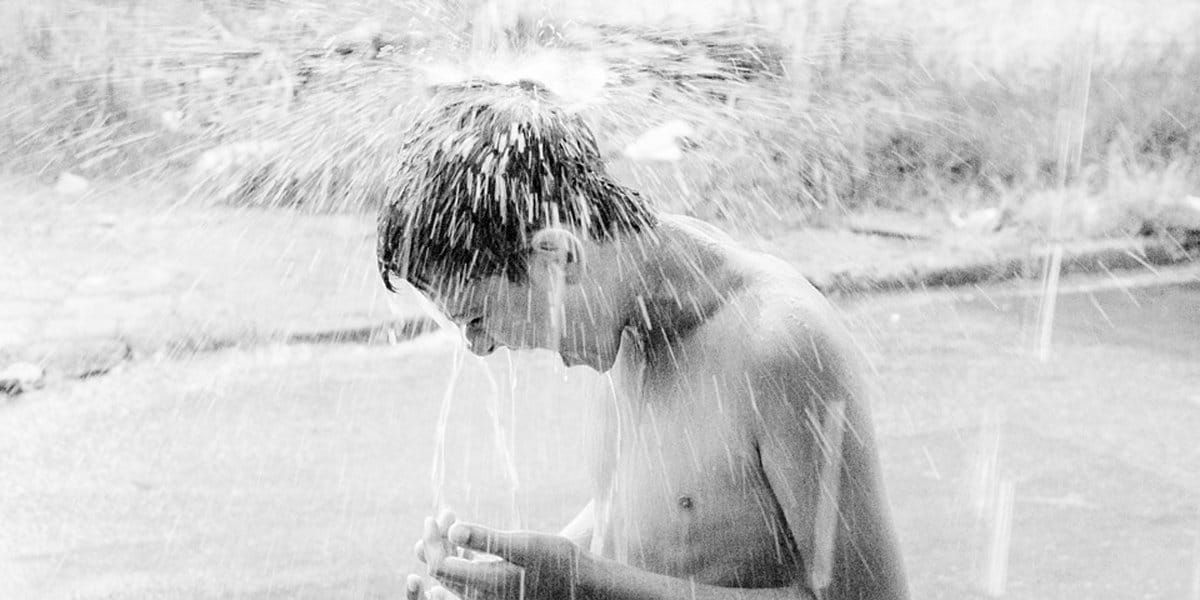 My experience of switching.

Since childhood, as far as I remember, I have been used to taking shower with hot water. It was like the de-facto option. Even if there was no geyser in the bathroom, we would get hot water (heated in the kitchen) in a bucket. This would be true at home and even when travelling.

I grew up in Bhopal and it does get quite cold in winters there. So a hot water shower is justified in winter. In summers, of course, we were actually happy to have the cold water thumping on the body, for relief from the sweltering heat. It would actually be quite irritating, when the water in overhead tank would have got hot in summer, with hot water emanating from even the cold water tap !

But my father was always taking shower with cold water. I was amused by this but never asked him about it when I was a child.

As I grew up and went to college, we did not have the luxury of hot water in the hostel. Neither in the tap, nor the mess kitchen staff would be kind enough to provide us any hot water. We had our own immersion rod to heat up the water ourselves in our room and then take for bath.

It’s only when I read The Almanack of Naval Ravikant earlier this year and where he talked about the benefits of cold water shower, that I really gave a serious thought to it. The reminder on the topic came about 2 weeks back when I was speaking to my friend’s 22 year old son, who has been taking shower with cold water for a while and has been enjoying it.

Benefits of cold showers
I found this interesting report online which has opinions from the medical profession, dermatologists, a world champion powerlifter, and even a celebrity stylist to determine once and for all if a frosty start to the day is really worth it. Sharing the info I got from this link https://www.sanctuary-bathrooms.co.uk/blog/10-mind-blowing-benefits-cold-showers/ :

Skincare
The most obvious benefit of a frosty cold shower is the benefit to your skin. Hot water can strip away the natural oils of your skin and dry it out, while cold water helps to constrict blood vessels to temporarily tighten pores and reduce redness. Dr. Carl Thornfeldt, the founder of Epionce Skin Care, explained:

It’s not just your skin that can benefit from the icy blast of a cold shower, your hair will also benefit. Washing your hair in warm water isn’t necessarily a bad thing – it allows shampoo and conditioner into follicles – but finishing off your shower with a cold rinse will help lock in moisture, while tightening to cuticles in your scalp to anchor your hair, reducing hair loss. Johnny Lavoy, Celebrity Hairstylist for PRO Beauty Tools, explained why:

“Taking a cold shower is actually really beneficial for your hair. Sometimes it’s not the most enjoyable thing, but it will add massive shine! The cold-water aids in closing the hair cuticle, allowing the hair to reflect more light, which results in serious shine.”

Fight itchy skin conditions
Itchy skin conditions like eczema and psoriasis can benefit from a cold shower, as warm water can strip away protective oils from the skin’s surface which can make these conditions worse. Sharyn A. Laughlin MD, Board Certified Dermatologist, Medical Director of Laserderm, explained further:

“You should avoid the effects of a hot shower or bath that can strip away the natural fats and oils from the skin surface. Heat causes increased blood flow in the dermis and this dilatation in conjunction with direct stimulation of nerve endings will increase the itch response.”

Alertness
Cold showers can administer a big boost of alertness, which can benefit everything from your work performance to your creativity and energy levels. It’s even said that Spartan warriors exalted the benefits of cold showers, believing that warm water weakened and cold water strengthen the body, which goes some way to explaining their infamous reputation. Dr. David Greuner, Cardiovascular surgeon of NYC Surgical Associates, had this to say:

“Cold showers are a great antidote for waking you up in the morning after a late night. Anything that surprises or shocks you will bring on the fight or flight response and raise your level of alertness. Similarly, taking a cold shower raises your adrenaline and increases alertness.”

You may have heard of sportspeople taking ice baths after a game – luckily, we’re not suggesting anything as extreme as that – but a cold shower can have many benefits for ordinary people after sport and exercise. Robert Herbst, personal trainer and 18-time World Powerlifting Champion, 32-time National Champion, and member of the AAU Strength Sports Hall of Fame, explored the benefits:

“Cold showers are a great way to reduce inflammation and promote recuperation and repair of microtrauma after a hard workout if one does not have facilities for an ice bath. Three to five minutes can reduce the flow of lymph fluid to areas which would later have to be removed for healing to take place.”

“Also, if you are old school, a cold shower is said to toughen the spirit, invigorate, and improve vitality, like the northern and eastern European practices of jumping into ice water or rolling in the snow after a sauna.”

Mental health
Cold showers have also been linked to improving mental health in clinical tests. According to a study by Dr. Nikolai Shevchuk in the stufy ‘Adapted cold shower as a potential treatment for depression’, cold showers could have some positive effect on sufferers of depression:

“A cold shower is expected to send an overwhelming amount of electrical impulses from peripheral nerve endings to the brain, which could result in an anti-depressive effect.”

Cold showers could also bolster your immune system. A study by Professor Vijay Kakkar (founder of the Thrombosis Research Institute in London) suggested that cold showers can increase circulation and stimulates the production of immune cells to help fight afflictions like flu and the common cold. Ben Boudro, Personal Trainer (CSCS) and owner of Xceleration Fitness, described why:

“The cold water forces your lymph vessels to go nuts and contract aka ‘come together’ like a pump. That pump moves fluid throughout your body and that’s a good thing because you jumpstart the process to remove toxins. It’s a Kickstarter for your immune system which we all know is a great thing.”

Fertility
In males, heat can have a negative impact on sperm count, so a cold shower could actually boost fertility for men looking to start a family. Dr. Ameer Consultant and Chief Dentist at Z Dental Studio, explored the science behind this claim:

“Research has shown that a warm shower may decrease the sperm count. Late in the 1950s various experiments were done which showed that hot baths are an effective contraceptive. This is because when the temperature of a man’s testes is increased the sperm count decreases.”

Weight loss
Metabolism is another huge benefit of taking cold showers. A study by the New England Journal of Medicine has found that adding a cold shower to your regular routine can burn up to 500 calories a day. Sharyn A. Laughlin MD, Board Certified Dermatologist, Medical Director of Laserderm, explained more:

“Another theory is that cold bathing or any cold stress increases brown fat activity to generate heat and the calories consumed to maintain body temperature may result in weight loss. A 2009 trial found that exposure to extreme cold temperatures increased brown fat activity 15 times in study subjects, which could translate into a 9lb. annual weight loss if the cold stress was maintained.”

What could be a big boost to those who value productivity – either in work or otherwise – is the mental sharpness that a cold shower can bring. Sharyn A. Laughlin MD explains the medical reason for this below:

“The effect on your physiology from a cold shower in the morning includes initial vasoconstriction then increased blood flow to organs and the skin as well, reflex deep breathing and increased oxygen intake, faster heart rate, adrenaline release, all of which may give you a boost in energy and metabolism, and a perceived mental lift.”

But then, it’s not an easy change to make, if any of you know the experience. As is the case with me, I decided to consider this a ‘habit formation exercise‘. Any of you remember my previous article on habits, then I decided to take a similar approach. Do it for 21 days continuously, and if I can sustain it, then the habit stays with you.

Many of my activities, that I am very regular at now, I adopted using the same approach. Be it journaling, reading, writing, running and even singing. Once I decide on the same, I just make sure I stick to the schedule and include it in my daily routine.

Its the 7th day today and 21 day would be on Nov 26, when I will be at the Ashram. Quite an opportune place to establish a habit. What say?