Creation of the World/universe _part 2

The process of creation is from the subtle to the gross.

The Truth, Brahman is the subtlest.  It is all pervasive. Even mind and intellect cannot cognise It although they are subtle.  Because Truth is Attributeless ( निर्गुण निराकार)

Space is the first element created by maya. It is the subtlest of the five elements. Space has the quality of sound.  Sound travels in the medium of space and space has an inherent sound.

From space came air / Vayu, which is less pervasive than space. Air has the qualities of sound and touch. ( that’s why air can be heard and felt)

Fire emerges from the air. It is less pervasive than air. It has the qualities of sound, touch,  form (and color ) that’s why it can be heard,  felt and seen.

Then came the water,  less pervasive than previous three. It has the qualities of sound, touch, form and taste. ( it can be heard, felt, seen, tasted).

The Last emerged the earth which is the grossest and the least pervasive. It has qualities of sound, touch, form, taste and smell.

Snake with its frightening and poisonous quality is created by maya. Qualities are the domain of maya. So material cause of the snake is maya. But it is the rope which is the ultimate cause of the snake. If there would not be rope, maya would never create any snake. Got it?

As characteristic of सत्वगुण/ satvik quality is knowledge,  characteristics of sense organs evolved from it is to gather knowledge.
From total satvik aspect of five elements the antahkaran ( mind,intellect, memory, ego~ मन,बुद्धी,चित्त,अहंकार) is formed.

The mind cannot contact the world directly. It has to go through the sense.  The senses also cannot function without the prompting of the mind.  They function in coordination. Thus mind(four functions) is the seat of knowledge,  gained through the knowledge senses( jnanendriyas) and that’s why manifested from satvik aspect( knowledge) of Maya.

Rasaj aspect of space~ power of speech in vocal cords.

Rajas aspect of water ~power of procreation in genitals.

Rajas aspect of earth~ power of excretion in the anus.

Rajoguna is characterized by activity. So wherever there is activity,  it is the manifestation of the rajasic aspect of Maya ( through karmendriyas and pranas)

These are 19 factors of the 24, the world is constituted of.

Now remaining 5 factors I.e. Gross 5 elements~
From the tamasa aspect of these subtle five elements,  the grossified five elements are born. The five subtle elements undergoes the process of panchikaran/ पंचीकरण(grossification) These elements thereafter are perceived by the senses. The permutations and combinations of these five gross elements form the entire gross( visible) world of all inert/nonliving things and the gross bodies of total beings.

Tamoguna is characterized by inertia.  That means it cannot know itself or illumine another,  which cannot activate itself.  Every thing gross in the world is inert/ जड . Stones, rocks can’t move itself. They are moved by the power of other forces.  Gross body functions only when  the subtle body is there. Once subtle body leaves it becomes dead and cannot move itself. 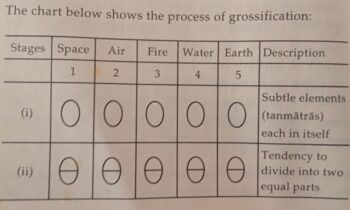 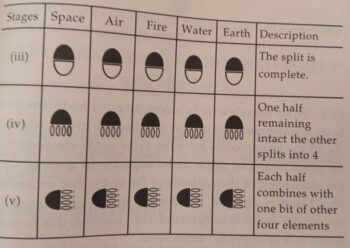 The tamasa aspect of each of the five subtle elements divides into two equal parts.

To the intact half of one element,  one eighth portion from each of the other elements gets joined.

Each element ( space, air, etc) has 50% of its own element and 12.5% of each of the other four. Therefore each of the gross element has the qualities of the other four elements.  These elements are thereafter perceived by the senses.permutations and combination of these elements, form the entire gross world including total gross bodies. Thus subtle ( invisible) gets visible( gross).