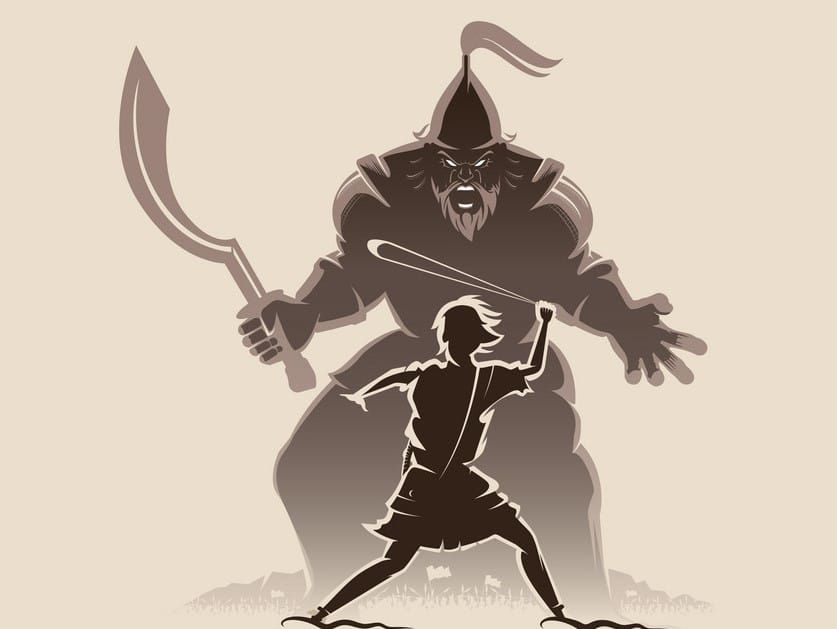 Confront your fear. The obstacle is the way

The biblical story of David and Goliath is well known all across the world. Today, the phrase ‘David and Goliath’ has taken on a more popular meaning, denoting an underdog situation, a contest wherein a smaller, weaker opponent faces a much bigger, stronger adversary and emerges as the winner.

Before the coming of Jesus, the nation of Israel was surrounded by the Philistine army that had come to conquer Israel. A great Philistine giant named Goliath that stood at over nine feet tall came to the front of the Philistine battle line each day for forty days and mocked the Israelites and their God. Goliath was outfitted head to toe in his glittering bronze armour, a sword, a javelin, and a spear. He was absolutely terrifying. Goliath, the champion of the Philistines, challenged the Israelites to send out a champion of their own to decide the outcome in single combat,

King Saul of Israelites, himself a great warrior was scared to take on the giant and called for other soldiers. A few highly decorated warriors with their arms and armour took the challenge and went to fight Goliath to end the war in single combat. However, Goliath killed them all. Seeing this, King Saul announced that he’ll marry his only daughter to the warrior who kills Goliath and will make him the prince of Israel. By this time, the fear of Goliath had gripped the Israelites, and not a single man came forward to fight him.

In this, David, a young shepherd who lived in a small village heard of this and went to meet with the commander of the Israelite army saying that he’ll fight with Goliath. The army commander and his soldiers laughed at David and asked whether he had ever trained as a soldier and can he even handle a sword or any other weapons? David told them that he was a shepherd and the only weapon he had ever used was his slingshot with which he had once hit a wild bear and another time a lion to scare them away from his sheep. The commander tried his best to dissuade David that he might get killed and tells him to walk away. David however was adamant saying that he had full faith in God and he’s the chosen one to fight and kill Goliath.

So finally, David walks into the battlefield all alone carrying his staff, his slingshot, and five stones from the brook to face the giant Goliath. The Israelites believed that David, a shepherd had no chance against Goliath and will be killed in one stroke.

David walks right in front of Goliath and confronts him with his slingshot. While Goliath stands there with his armour, sword, javelin, and spear. When Goliath looked at David, he cursed him. To him, David replied, “All the earth may know that there is a God in Israel and that all this assembly may know that God saves not with sword and spear; for the battle is God’s, and he will give you into our hand.”

David hurled a stone from his sling and hit Goliath in the center of his forehead. Goliath fell on his face to the ground. David picked up Goliath’s sword and cut off his head. Seeing this, the Philistine army fled.

As promised King Saul crowned David as the Prince and married him to his only daughter. Later David became the king of Israel and one of the greatest rulers in its history.

This biblical story shows that in any situation you have to confront your fears and fight the challenges in your life and you will get a breakthrough. Don’t run away from your biggest fear. Face it. David knew size doesn’t matter. It’s the heart, courage, and commitment that matters. You can apply the same principle and same level of thinking to your life and the challenges you’re facing. Think bigger than the challenge, and be bigger than the obstacle. There’s nothing that’s impossible. The word impossible itself says, “I-M-POSSIBLE.”

In fact, David didn’t even have any weapon used by a professional soldier but killed Goliath with a slingshot. This shows that you don’t have to wait or brood that you don’t have the latest gizmos and technology to do your work. God has given you whatever skills you require to face the challenges and emerge as the winner. Look within and you will find your strength, courage, and all the skills that you need. David had full faith and conviction that if he could scare away a bear with his slingshot, he can easily kill Goliath with the same. He didn’t doubt or question.

The spirit of Goliath represents big enemies and giant problems. If you are currently battling with a situation or an entity that is threatening your peace, harassing you, and intimidating you, you are facing a Goliath. If there is a situation or entity that is seeking to enslave you, you are facing a Goliath. The allusion of Goliath was first to emphasize the idea that God always has our back and that anything is possible when we have faith.

There have been several real-life David’s like Mahatma Gandhi who only with his walking stick took on the might of the British Empire and threw them out of India. There’s Erin Brockovich, an inexperienced legal clerk, who took on the giant corporate Pacific Gas and Electric Company for polluting the local area with their wastage and adding carcinogens to the water table. She won the case and the company settled for 333 million dollars compensating all the affected families. In 480 BC when an army of over 100,000 Persians attacked Greece, it was only 300 Spartans who fought the massive Persian army to defend their native soil.

In 1983, the Indian Cricket Team led by Kapil Dev was one of the weakest and was sent to participate in the Cricket World Cup. The Indian team had no sponsors and had to buy their own Cricket uniform and gear. They washed their own clothes in the hotel room and many wore torn socks as they didn’t have money to buy new ones. The entire media had written off the Indian team. Kapil Dev, captain of the Indian team didn’t lose his confidence. He kept on boosting the morale of the team and they kept winning matches against mighty New Zealand, West Indies, England, and other teams. In the finals, India faced the might of the West Indies, the two-time World Cup winners, and defeated them to win the first Cricket World Cup for India in 1983.

Like David, they didn’t have the best of equipment, dress, money, food and most of the Indian team couldn’t read English but they had a heart filled with courage, strength, and commitment towards their goal. They had one goal to put India on the Cricketing map and from the win of 1983 India never looked back. Today, India is the most powerful Cricket team and a sport that has turned into a massive craze.

So next time when you face an obstacle or a challenge in your life, confront it with courage. The obstacle is the doorway but you’ll have to stand and face it. The obstacle will crumble to show you the path.

A Book I Read “ Karma – A Yogi’s Guide to Crafting Your Destiny”.
When It Comes to Health -Ignorance Prevails over Reasoning