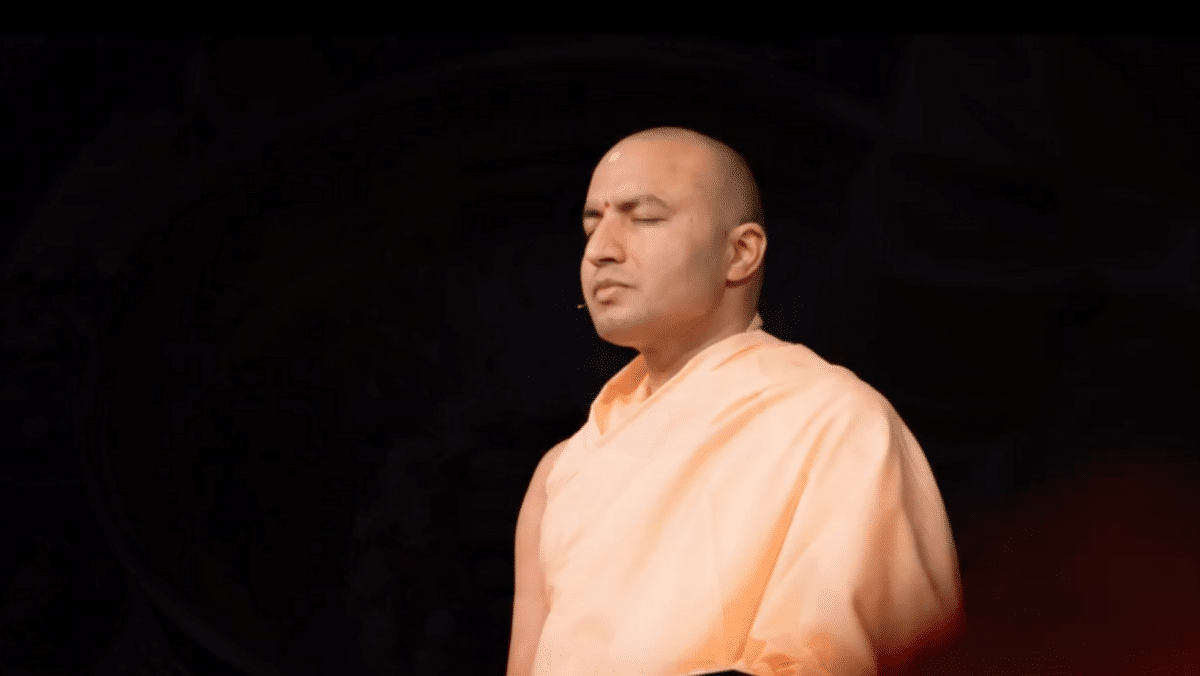 He reverberates with his presence, in the most mystic ways.

For any mistake that I may have made in writing about my experience with the revered Om Swami, I seek forgiveness and guidance. All there is, in this post, are devotion and pure intention towards Om Swami and all the venerated Gurus.

I heard the name “Om Swami” (as I take the name in my mind, my eyes well up with tears. More on ‘tears’ later in this post) by a corporate vendor in one of our business meetings back in 2016, in India.

My journey with Sadhguru, which continues, usually fuelled curiosity in colleagues and sparked conversations in corporate settings. This germinated largely to gather about my decision to rebuff the corporate job for a while, consign myself to South India to live in the ashram for rigorous training, then come back to the ‘real world,’ as they would put it.

From the business meeting to Sadhguru, the conversation shifted to a direction that I’d never imagined exploring in years to come.

“Do you know about Om Swami as well? He is very knowledgeable and he is amazing,” the vendor said.

“Sure, I’ll get hold of his book. Thanks!” I said, with utmost truth but tepid intent.

In 2019, in the USA, I turned the television on that was auto-set on YouTube. Out of many suggestions from the video-sharing social channel, the one that grabbed my attention was, “Om Swami.” Now that this sounded familiar, it transported me back to the vendor’s words that prompted me to press the play button. The journey of listening to Swami’s discourses continued.

I turned to a library in the room of a known someone. “Kundalini- An untold story by Om Swami” is the first book that caught my gaze. I devoured the book. My library, physical as well as Kindle, started to fill up with Swami’s books.

In 2021, in India, my best friend and I spoke about Om Swami. “Do you know about him at all?” I posed the question. “Of course I do and I like him,” came the answer. We took the time to watch his videos together and enrolled in one of his virtual courses where I got to know that Swami’s and my ascendant sign is the same. I cheered at this discovery with a childlike innocence similar to the one in which children bubble with joy at seeing their best friend adorn the same dress.

I revere Swami and am too lowly a creature in front of his divine presence, on the planet. Therefore this is nowhere to elevate or compare my birth or planetary positions with the venerated Om Swami.

Come 2021 close to year-end, I became a paid member on os.me—one of the best decisions I took in the year gone behind.

I do not own any Guru as mine or regard them as someone’s else as I do not see a yawning gulf between them. My sense of devotion brings me to their lotus feet as if they are “One Supreme.”

My eyes have their own heart it seems, that churn emotion and bring them out as ‘tears.’

My mind typically engages and absorbs discourses using intellect at first (a natural process for many of us) and when my eyes use their ‘own heart’ and dispense tears, I get to know that ‘devotion’ has replaced the intellect. Just as it had started with Shirdi Sai Baba, Sadhguru, Guruji, it started with Om Swami too.

Now that my tears make the appearance right after Om Swami does on my screen, I know that I have tasted a drop of devotion towards him. (I have not yet had the opportunity to meet with him except on television). He smiles, speaks and shares intense insights about the divine and the spiritual wisdom he carries. My hands join together and my head bows down to him.

Tears—I often thought that they are the product of my overactive emotions that flow inexorably as I witness the divine presence of any Guru or experience devotion towards the supreme. I could not figure them out and needed guidance; even though somewhere in the kernel of my being I knew that they ooze out of devotion.

But ‘self-doubt’ is the crack that when appears can topple the tower of faith. I was in self-doubt.

They have streamed down my cheeks for years when I have stood before the Divine and the Gurus. In perplexity, I sought the answer to ‘why tears?’

Recently in my twenty-one days of Devi Linga Bhairavi Sadhana, when my body was set on the devotional fire and water in my eyes flowed like currents in the Ocean, on the day of the culmination, I was blessed with the answer.

Sadhguru shattered my myth (that tears are my weak emotions) by elaborating through his discourse that emotion when tuned into devotion is the most powerful dimension out of the four—  body, mind, emotion and energy.

💫 “Bhakti” can enhance human beings in the most beautiful ways.

On January 18, 2022, the culmination day of my Devi Sadhana, I sat with eyes closed and something inexplicable happened. My eyes opened to a glimpse of Om Swami’s for a fraction of seconds in the image of my Guruji. A tear of devotion escaped my eye.

Joyous and awestruck, I landed in the desert of self-doubt again. But Sadhguru’s voice rang into my ears. I recalled what I had just heard him say.

Emotion is the most powerful dimension for Devotion. I should trust my tears. And, I did.

The path to unravelling ‘tears’ of devotion may remain an eternal journey of exploration for me but one thing has come into my experience—Tears are not always a sign of weak emotion but a powerful dimension of devotion.

My tears for Swami must have communicated my heart’s message to him as he reverberates with his presence, in the most mystic ways.

✨With eyes welled up,

I bow down to your holy feet.

✨With baby steps though,

I am walking towards you,

I demystified that my tears,

are flowing in love, for you.

Image credit: Swami’s image from a page on Facebook.

Immense Grace and Kindness
What’s In A Seeker’s Heart?