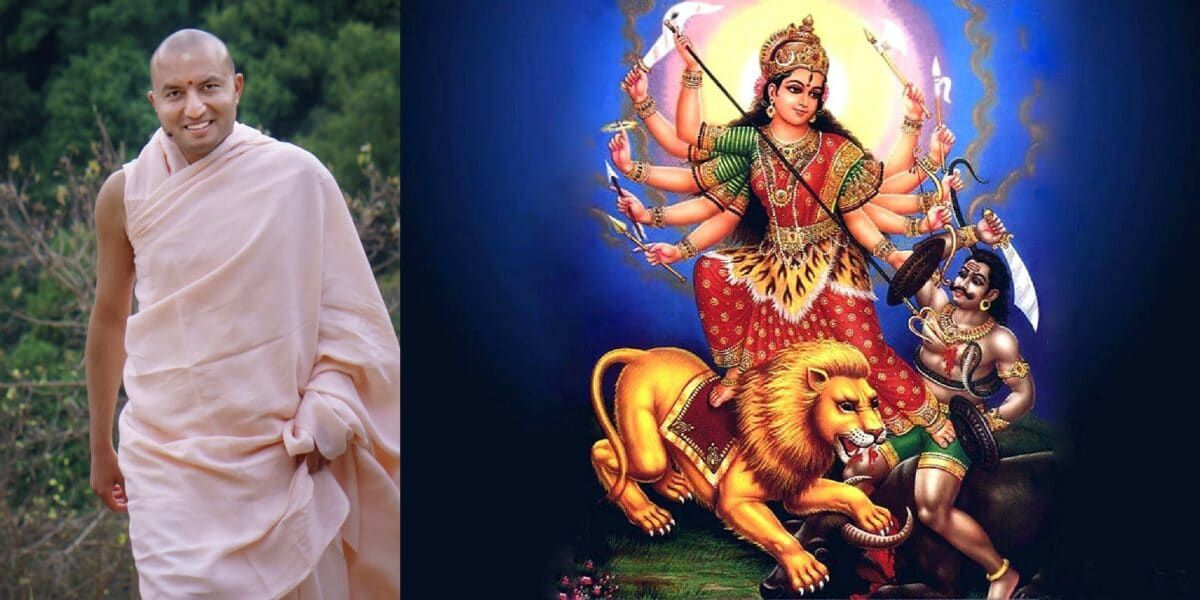 Divine Play of Swami and Sorrow of Narhari

“First let me ask you something, aren’t you afraid of death?” asked Janardhan ignoring the question of Harshwardhan.

“What’s to fear? We will be born again by grace of Swami.” Replied Harshwardhan with strangely calm voice.

Janardhan felt uneasiness and irritation with this reply.

“Seeing your kid(Ashokveer) die in front of your eyes may help you to drop this nonsense philosophy.” Snubbed Janardhan

“Search every corner of crop land. Narhari and that kid may be hiding in the crops. Go search them.” Screamed Janardhan at his Thugs

“Don’t you dare touch my kid. You rascal!!! Free my hands and I will show you the protective instinct of a father.” Came a angered reply from Harshwardhan

Narhari could hear the sound of crops around her. With shallow breath, she was holding gun in one hand and fast asleep kid in the other. She began to tie kid to her back in cotton blanket.

As feet passed by her she drew her body close enough to hold gun in position. She remembered the face of Swami and roared like a lioness. Hearing the roar of protective mother, people were thrown off balance of their feet. Grabbing the opportunity, she fired with one hand and sliced them with sickle by other hand. Her speed and fierceness couldn’t be any match for Thugs. They fell like bunch of cards. Janardhan couldn’t see anything, all he could hear was gun shots.

Janardhan approached the crop land cautiously but his cautiousness wasn’t enough compared to sharp ears of Narhari. Just before entering the crop land, bullet pierced his left hand. Pressing his wound on hand, he fell back and ran towards Harshwardhan.

What came out of crops was Narhari with Abhishekam of blood all over her body. Fierce like Kaali Mata, she ran towards Janardhan. Rest of Thugs just ran for their life. Seeing her Avatar of kaali Devi, Janardhan held gun towards Harshwardhan. Harshwardhan was tied to a tree with nail pricking handcuffs. More you moved, more will they pierce your hands and more blood would come out of hands.

“Leave him and I will let you live.” Said Narhari

“No. I have come here to kill all family. No matter if I die.” Said Janardhan with trembling hands.

Janardhan fired at Harshwardhan. Three gun shots were fired simultaneously from different guns. Harshwardhan and Janardhan were killed instantaneously. Third Gun shot was fired at Narhari by one of the half conscious thug. Third shot hit the Ashokveer.

Ashokveer, son of Narhari, piece of her heart and husband killed in just moments. She fired and killed the thug.

Narhari began to wake up her kid.

She couldn’t control her anger. Remembering Swami’s face she said, “Swami all my bhakti and dedication didn’t moved you. You didn’t come to help me. If my devotion is true and if I have been dedicated mother and wife, I curse you to remain on Hellish planets for 100 years.” Said Narhari with all the sorrow of universe.

Sky roared, thunderbolts of clouds began to fall  near Narhari. Clouds began to pour down like river of sorrow. Waves rose in ksheer sagara. Adishesha was disturbed and this caused Vishnu to come out of meditative state.

Clouds stopped pouring near Narhari. Melodious flute began to play around her. She rose head to see source of flute music. Swami appeared in front of her with full glorious Avatar for his Bhakta.

“Why are you angry Narhari?” asked Swami

“You know everything and you still ask me. Is this how you reward your bhakta?” asked Narhari

“I can’t play with the cycle of nature. Everything is temporary. With time everything vanishes.” Said Swami

“You are the time. I beg before you to give them life. I can’t live without them. I don’t know anything.” Said Narhari

“Lord, please stop your philosophy and grant my wish. Time and nature begins and ends with you.” Said Narhari with folded hands

“Ok. As you wish.” Said Swami. With this he uttered tantric mantras and blew it on child and husband.

As soon as they got up from sleep of death, Narhari holded the feet of Swami in tears of gratitude.

“I am sorry lord, I cursed you in my anger and sorrow.”

“It wasn’t your fault Narhari. It was leela of Sri Hari. I was meant to go to Hellish planet.” Chuckled swami

(Swami lived on hellish planet for 100 years. It was like one year of Earth. He gave sadhanas to Janaki, mother of Janardhan to liberate her from cycle of birth and death.)