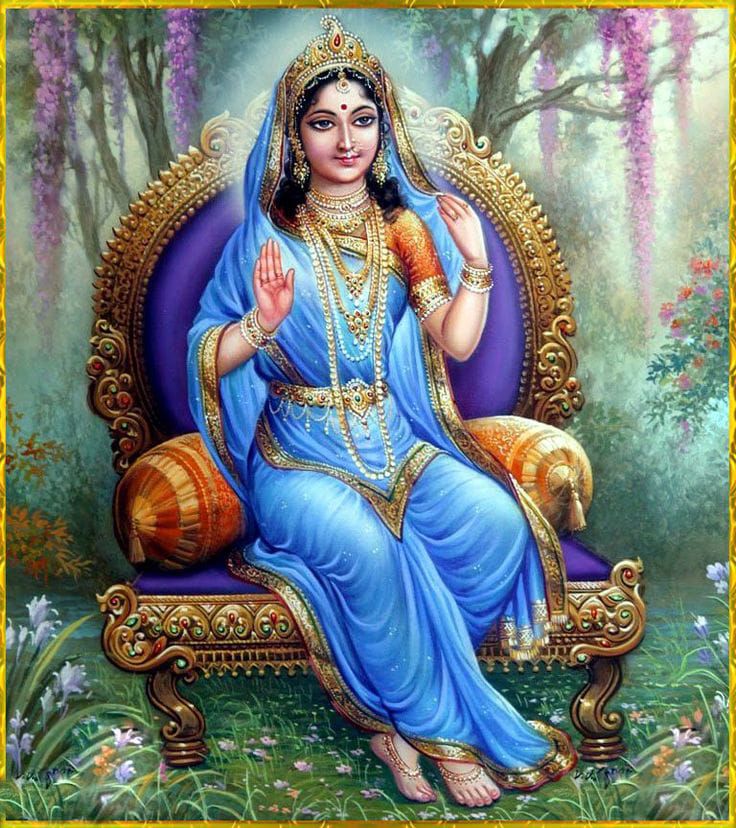 Divine Shrimati Radha Rani Who Rules over the Ruler of This Universe….

I sounded a bit harsh in my last post but you all loved that post and asked me to write on Shrimati Radha Rani’s incarnation….

So here I’m trying to write on my isht which is my foolishness.. I’m not the right person to write about her but I accept this as her grace…

The Puranas relate a story concerning the divine appearance of Shrimati Radharani as follows. One day, Vrishabhanu Maharaja, who was living at Ravel at that time, went to the bank of Yamuna at around noon to take a midday bath.

As he approached the bank of the Yamuna, he saw a golden lotus flower floating on the water and shining brightly like a thousand suns. Vrishabhanu immediately waded into the river and when he came near to the golden lotus flower, he beheld the most beautiful and radiant form of baby girl lying within the petals of the lotus.

At that same moment, Lord Brahma suddenly appeared in the sky and speaking in a grave voice, informed Vrishabhanu that in his previous life, Vrishabhanu and his wife Kirtida had performed great austerities in order to get the consort of Lord Vishnu as their daughter.

Lord Brahma told Vrishabhanu that this girl was the origin of the goddess Lakshmi and that he should take great care of Her. Lord Brahma then placed the baby girl in the arms of Vrishabhanu who became overjoyed, and after taking permission from Lord Brahma, returned to his home.

Seeing the beautiful baby girl shining like millions of autumnal moons, mother Kirtida was overcome with joy and immediately arranged for all kinds of religious rites to be performed and donated thousands of cows to the brahmanas.

At that time baby Radhika was placed in a gem-studded cradle and gently rocked back and forth by all the little girls of the village. Day by day Her luster increased just like the digits of the moon.

Within a short while it was observed that the baby girl made no noise and had not yet opened Her eyes. Vrishabhanu and his wife feared that their baby girl was perhaps blind from birth and also dumb.

At that time, Srila Narada Muni visited the home of Vrishabhanu and informed him that regardless of the girl’s apparent blindness, they should continue with the birth celebrations.
Vrishabhanu therefore made elaborate arrangements for a lavish birth celebration and sent out invitations to all the residents of Ravala and Gokula and especially to his dear friend Nanda Maharaja and his family.

On the appointed day, the guests had assembled and the birth celebrations were going on in great jubilation. Nanda Maharaja and Yashoda Mayi had arrived with Rohini and also brought their small children Krishna and Balarama.

Kirtida met with Yashoda and told her that she was very happy to have such a beautiful daughter, but was feeling rather distraught because her child was both dumb and blind.

Krishna had just passed His first birthday and was happily crawling around the courtyard on His hands and knees. Arriving at the cot in which Radhika was lying, Krishna held on to the sides and managed to lift himself up, He then peered into the cot where His gaze fell upon the beautiful moon-like face of baby Radhika.

As soon as baby Radhika smelt the exotic fragrance of Krishna’s transcendental body, She immediately opened Her eyes for the very first time, and looked directly at Krishna, who was the first person that She had ever seen.

As Krishna gazed lovingly at baby Radhika, He began smiling ecstatically. Radhika then suddenly began to cry and for the very first time she made a sound. Vrishabhanu and Kirtida, along with all the assembled Vrajavasis, were overjoyed to find out that their beloved daughter Radhika, was not blind nor dumb after all.

In the Radha-rasa-sudha-nidhi it says. “So powerful is the glancing of Her eyes, that the flute slips from Krishna’s hands, His peacock crown starts to slip, and His yellow shawl becomes displaced as He swoons and falls to the ground. Alas, will I ever get the chance to serve with love and devotion such a person as Radharani.”

This is according to our scriptures…..

Now I’ll tell you something which I feel about her…

Radha , some will say she is the shakti of krishna, I accept this but tell me if she’s shakti then she would be under shaktiman, the source of energy… Like you see Sri Mata Lakshami do charan seva of Shri Hari on shesh Shaiyaa…

So what’s your thought on this? Isn’t this what we call love? I personally hate those who compare materialistic love to the divine love of Shri Radha Krishna… There is no comparison but inspiration.

This is totally my personal experience….

You see Sita Mata was not born, Raja Janak found her. Same here Radha Rani was not born, Vrishbhanu Ji found her…. You see the similarity which is that feminine energy doesn’t needs support, she is complete in herself… She is the creator…

In Lalita Sahastranma  we read about Maa:

Now let me tell you about Radha Rani:

She is the empress of Vrindavan not the queen.

She came from Krishna’s heart when Krishna was dying in separation in virah,,,

She took form to bless all Brajwasis…

Now let me tell you another beautiful fact:

We all know Devatas performed Yajna to invoke Maa Laitamba.

Then Devatas said: Maa we are unable to do your Stuti… Maa please tell us your glory…

Noone can know Maa so how one can recite her stuti.. So it’s only Maa who can do thi… And these vagdevis were not different they are same as lalitama because maa Lalita created them….

Now tell me one thing, were they all able to sing Radha Rani’s glories?

No, only Shrimati Radha Rani can do so.

So you see in 16th C.E. Swami Haridas the master of Tansenwho’s is considered to be the incarnation of Lalita sakhi (one of the Asht sakhi) sung the glory of Radha Rani and since then this world came to know about her…. Because before this no one was able to do so…..

Well, I’m initiated in the beautiful lineage of Shrimati Radha Rani where one of her head Sakhi came to this earth in 15th century to sing her glory… 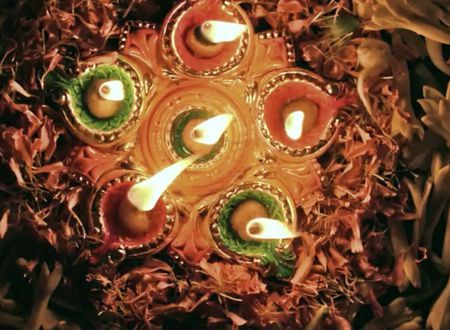 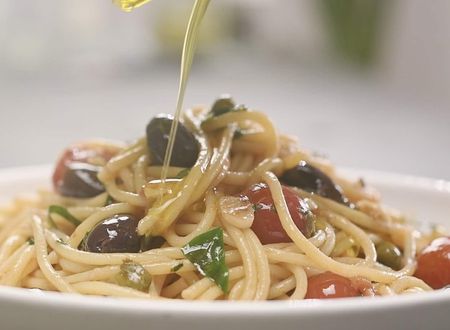