Sin can be righted 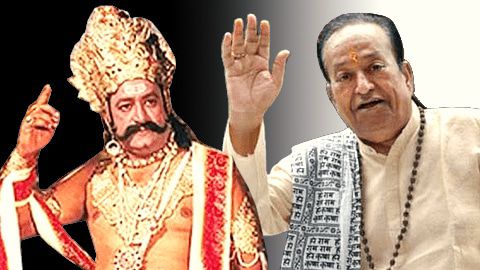 The problem with the ‘Good over Evil’ adage is that its tentacles have pervaded and taken over our senses. While the good is expected to triumph and must, we are somehow numbed into believing that the villains deserve no mercy. They ought not to belong. We think they deserve the special treatment of the non-good kind. They must be flogged, hanged, killed, or ostracised.

Is it as black and white as that?

Societal customs and laws do what they do, evolving as it should. I am thinking here about how we deal with villains in our heads and in our interactions.

A villain is defined as ‘a wicked or evil person; someone who does evil deliberately‘.  Aha, one would say — ‘deliberately’ is equivalent to ‘intentional’, and to hell, they must go. Here we go again!

I got thinking about this when I read about the passing away of Arvind Trivedi. Most people know that Mr. Trivedi enacted the role of Ravana brilliantly in the epic serial ‘Ramayan’.  His booming voice, mesmeric eyes, and the swagger spouting arrogance and ego to covet and possess what was not his made a huge impact on the show’s believability and success. His presence in the serial was larger than life, if not more than that of Lord Rama, epitomising eloquently evil and good respectively. Ramayan was and remains a great watch. When it was first shown on Doordarshan a long time back, I was very elated when Ravana was eventually vanquished. It was a different feeling then.

Cut to the real world today, and I find that Mr. Trivedi was cherished by many as a good, pious, kindly human being. His portrayal of evil and reports of his real-life humane persona alchemised in my head. It dawned that there is no reason to detest Ravana as much I did when young. He deserves better.

In the book, ‘What Becomes of the Soul After Death’, Swami Sivananda writes about a sinner –
Friend! Thou art pure Soul,
Sin cannot touch thee,
Regain your lost divinity,
Sin is nothing.
Sin is a mistake only;
You can destroy sins in the twinkling of an eye,
Be bold, be cheerful,
Stand up, wake up, “Uttishthata, Jagrata”.

The Bhagwad Gita further says: “Even the worst sinner can become righteous, can cross sins by the raft of wisdom.”

I completely agree. Evil is a part of the persona and it is possible that circumstances or some trigger forced the person into doing inhuman acts. There is likely goodness that co-exists just like Ravana who kidnapped Sita was a very devout and learned man. We are fixated by misdeeds so much that we abhor and castigate. It becomes lop-sided. Critical thinking should help us arrive at a more balanced view, shaping our thoughts better. Our inner self will also be in a better place, perhaps more elevated.

I have dealt with villainy (not genuinely evil thankfully) by mostly staying clear, maintaining calm, ignoring the misguided ones and their indulgences. I have been lucky that there have not been many I have had to deal with. I am also aware that the so-called ‘villainy’ maybe just my perception, driven by circumstances, my less evolved state, or false assumptions. I tell myself I need to be more forgiving, compassionate, and indulgent with such people. Because even if I was right about their misdemeanours, and me being hit in the process, they deserve a chance to transform for the better. How? Self-realisation facilitated by providence and/or their earthly messengers will eventually transform, taking the strayed people towards righteousness. The outcome will be just as we want it – good winning over evil.