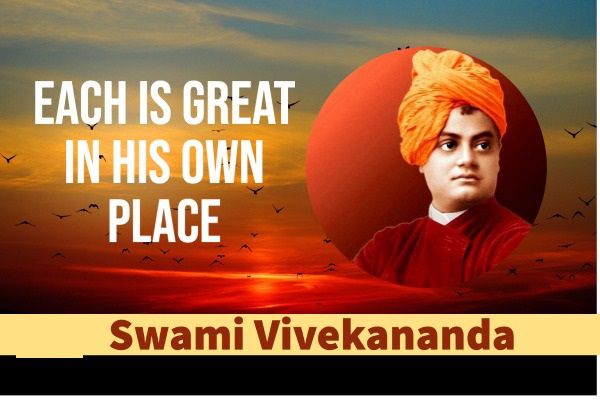 Each is Great in His Own Place

A Short And Deep Story Shared by Swami Vivekananda

Swami Vivekananda shared this short story in his Lecture Each is Great in His Own Place, to explain the point

A certain king used to inquire of all the Sannyasins that came to his country, “Which is the greater man — he who gives up the world and becomes a Sannyasin, or he who lives in the world and performs his duties as a house holder?” Many wise men sought to solve the problem. Some asserted that the Sannyasin was the greater, upon which the king demanded that they should prove their assertion. When they could not, he ordered them to marry and become householders. Then others came and said, “The householder who performs his duties is the greater man.” Of them, too, the king demanded proofs. When they could not give them, he made them also settle down as householders.

At last there came a young Sannyasin, and the king similarly inquired of him also. He answered, “Each, O king, is equally great in his place.” “Prove this to me,” asked the king. “I will prove it to you,” said the Sannyasin, “but you must first come and live as I do for  a few days, that I may be able to prove to you what I say.” The king consented and followed the Sannyasin out of his own territory and passed through many other countries until they came to a great kingdom. In the capital of that kingdom a great ceremony was going on. The king and the Sannyasin heard the noise of drums and music, and heard also the criers; the people were assembled in the streets in gala dress, and a great proclamation was being made. The king and the Sannyasin stood there to see what was going on. The crier was proclaiming loudly that the princess, daughter of the king of that country, was about to choose a husband from among those assembled before her.

It was an old custom in India for princesses to choose husbands in this way. Each princess had certain ideas of the sort of man she wanted for a husband. Some would have the handsomest man, others would have only the most learned, others again the richest, and so on. All the princes of the neighbourhood put on their bravest attire and presented themselves before her. Sometimes they too had their own criers to enumerate their advantages and the reasons why they hoped the princess would choose them. The princess was taken round on a throne, in the most splendid array, and looked at and heard about them. If she was not pleased with what she saw and heard, she said to her bearers, “Move on,” and no more notice was taken of the rejected suitors. If, however, the princess was pleased with any one of them, she threw a garland of flowers over him and he became her husband.

The princess of the country to which our king and the Sannyasin had come was having one of these interesting ceremonies. She was the most beautiful princess in the world, and the husband of the princess would be ruler of the kingdom after her father’s death. The idea of this princess was to marry the handsomest man, but she could not find the right one to please her. Several times these meetings had taken place, but the princess could not select a husband. This meeting was the most splendid of all; more people than ever had come to it. The princess came in on a throne, and the bearers carried her from place to place. She did not seem to care for any one, and every one became disappointed that this meeting also was going to be a failure. Just then came a young man, a Sannyasin, handsome as if the sun had come down to the earth, and stood in one corner of the assembly, watching what was going on. The throne with the princess came near him, and as soon as she saw the beautiful Sannyasin, she stopped and threw the garland over him. The young Sannyasin seized the garland and threw it off, exclaiming, “What nonsense is this? I am a Sannyasin. What is marriage to me?” The king of that country thought that perhaps this man was poor and so dared not marry the princess, and said to him, “With my daughter goes half my kingdom now, and the whole kingdom after my death!” and put the garland again on the Sannyasin. The young man threw it off once more, saying, “Nonsense! I do not want to marry,” and walked quickly away from the assembly.

Now the princess had fallen so much in love with this young man that she said, “I must marry this man or I shall die”; and she went after him to bring him back. Then our other Sannyasin, who had brought the king there, said to him, “King, let us follow this pair”; so they walked after them, but at a good distance behind. The young Sannyasin who had refused to marry the princess walked out into the country for several miles. When he came to a forest and entered into it, the princess followed him, and the other two followed them. Now this young Sannyasin was well acquainted with that forest and knew all the intricate paths in it. He suddenly passed into one of these and disappeared, and the princess could not discover him. After trying for a long time to find him she sat down under a tree and began to weep, for she did not know the way out. Then our king and the other Sannyasin came up to her and said, “Do not weep; we will show you the way out of this forest, but it is too dark for us to find it now. Here is a big tree; let us rest under it, and in the morning we will go early and show you the road.”

Now a little bird and his wife and their three little ones lived on that tree, in a nest. This little bird looked down and saw the three people under the tree and said to his wife, “My dear, what shall we do? Here are some guests in the house, and it is winter, and we have no fire.” So he flew away and got a bit of burning firewood in his beak and dropped it before the guests, to which they added fuel and made a blazing fire. But the little bird was not satisfied. He said again to his wife, “My dear, what shall we do? There is nothing to give these people to eat, and they are hungry. We are householders; it is our duty to feed any one who comes to the house. I must do what I can, I will give them my body.” So he plunged into the midst of the fire and perished. The guests saw him falling and tried to save him, but he was too quick for them.

The little bird’s wife saw what her husband did, and she said, “Here are three persons and only one little bird for them to eat. It is not enough; it is my duty as a wife not to let my husband’s effort go in vain; let them have my body also.” Then she fell into the fire and was burned to death.

Then the three baby-birds, when they saw what was done and that there was still not enough food for the three guests, said, “Our parents have done what they could and still it is not enough. It is our duty to carry on the work of our parents; let our bodies go too.” And they all dashed down into the fire also.

Amazed at what they saw, the three people could not of course eat these birds. They passed the night without food, and in the morning the king and the Sannyasin showed the princess the way, and she went back to her father.

Then the Sannyasin said to the king,
“King, you have seen that each is great in his own place. If you want to live in the world, live like those birds, ready at any moment to sacrifice yourself for others. If you want to renounce the world, be like that young man to whom the most beautiful woman and a kingdom were as nothing. If you want to be a householder, hold your life a sacrifice for the welfare of others; and if you choose the life of renunciation, do not even look at beauty and money and power.”

ps: As you will notice, this is inspired by Bhagavad Gita, Chapter 3, 18.  Swami Vivekananda when travelling as a wandering monk with minimum items used to carry only 2 books – Bhagavad Gita and the Sermon on the Mount

What is Liberation or Mukti?
Don’t let that to stop you