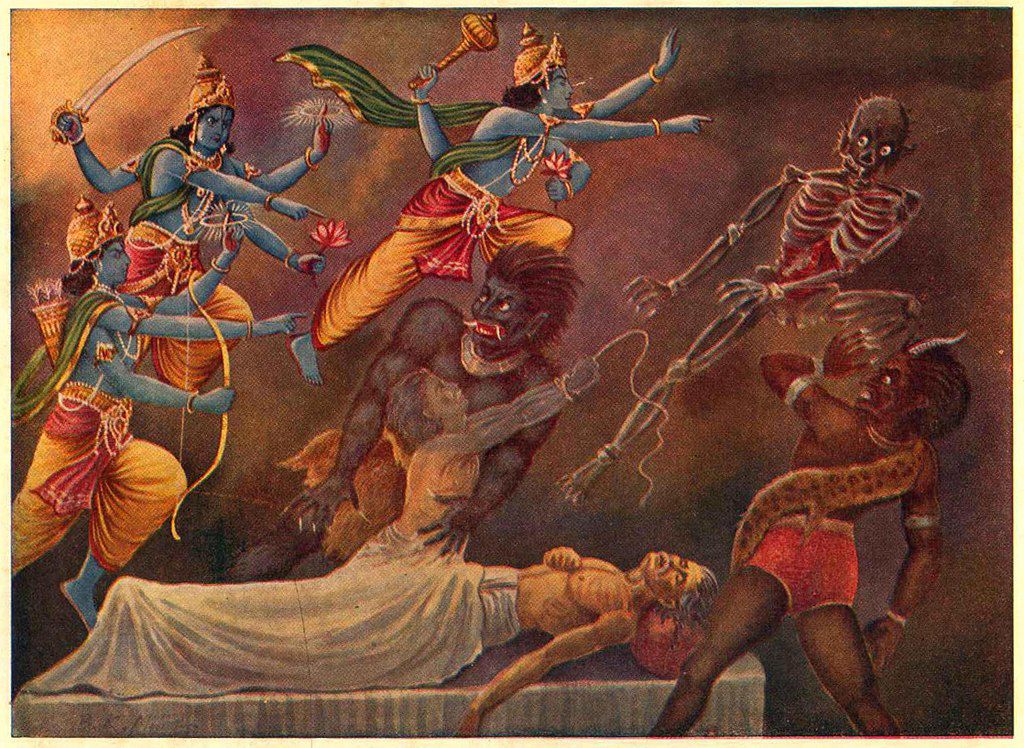 Perfection in human form of life

In the yoga system, this process is called pratyāhāra, which means “just the opposite.” Although during life the eyes are engaged in seeing worldly beauty, at death, one has to retract the senses from their objects and see the beauty within. Similarly, the ears are accustomed to hearing so many sounds in the world, but at the moment of death, one has to hear the transcendental oṁkāra from within.

“After being situated in this yoga practise and vibrating the sacred syllable oṁ, the supreme combination of letters, if one thinks of the Supreme Personality of Godhead and quits his body, he will certainly reach the spiritual planets.” (Gītā 8.13)

In this way, all the senses have to be stopped in their external activities and concentrated on the form of viṣṇu-mūrti, the form of God. The mind is very turbulent, but it has to be fixed on the Lord in the heart. When the mind is fixed within the heart and the life air is transferred to the top of the head, one can attain perfection in yoga.

At this point, the yogī determines where he is to go. In the material universe, there are innumerable planets, and beyond this universe, there is the spiritual universe. The yogīs have information about these places from Vedic literature. Just as one going to America can get some idea of what the country is like by reading books, one can also have knowledge of the spiritual planets by reading Vedic literature.

The yogī knows all these descriptions, and he can transfer himself to any planet he likes without the help of spaceships. Space travel by mechanical means is not the accepted process for elevation to other planets. Perhaps with a great deal of time, effort, and money a few men may be able to reach other planets by material means — spaceships, spacesuits, etc. — but this is a very cumbersome and impractical method. In any case, it is not possible to go beyond the material universe by mechanical means.

The generally accepted method for transferral to higher planets is the practice of the meditational yoga system or jñāna system. The bhakti-yoga system, however, is not to be practised for transferral to any material planet, for those who are servants of Kṛṣṇa, the Supreme Lord, are not interested in any planets in this material world because they know that on whatever planet one enters in the material sky, the four principles of birth, old age, disease, and death are present.

If one tries to enter higher planets by mechanical means, instant death is assured, for the body cannot stand the radical changes in the atmosphere. But if one attempts to go to higher planets by means of the yoga system, he will acquire a suitable body for entrance. We can see this demonstrated on this earth, for we know it is not possible for us to live in the sea, in a watery atmosphere, nor is it possible for aquatics to live on the earth.

Thus the Vedas say that those who live on higher planets live upward to ten thousand earth years. Yet despite such a long life span, death awaits everyone. Even if one lives twenty thousand or fifty thousand or even millions of years, in the material world the years are all counted, and death is there. How can we escape this subjugation by death? That is the lesson of the Bhagavad-gītā.

“For the soul, there is never birth nor death. Nor, once having been, does he ever cease to be. He is unborn, eternal, ever-existing, undying, and primaeval. He is not slain when the body is slain.” (Gītā 2.20)