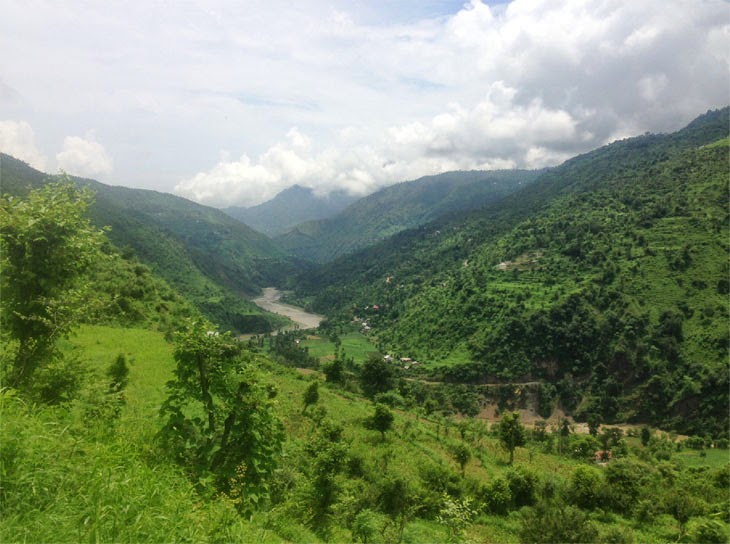 I have absolutely no clue whether our souls go to heaven or hell after death. But one thing that I am certain about is that if there is a place where desires cease to exist or happiness pervades your identity and each pore emancipates pure love is by the lotus feet of Swamiji , right here on this very earth.
The sound of the gushing river , the lush green mountains rising above the clouds, the hyms of bhajans in everyone’s breath and the compassion pouring from the eyes, it is as though the Divine Mother – The Creatrix herself has lifted you close to her bossoms with her arms wraped around you. The worldly worries as though never were and would never be .

Life is a celebration here every moment and every infinitesimal fraction of a moment. All questions about life why, what, when and how disappear in the misty clouds engulfing the mountains. The softly chirping birds beautifully fill the air with the sound of nature. What want can exist in such pristine form of life, none that I know of, none that I can think of.

They say Vishnu’s abode is Vaikunth Dham, I say that by the lotus feet of Swamiji’s at his abode our very own Shri Badrika Ashram is the only Vaikunth Dham that I know across all the three planes of the Universe. It’s been a while now and I still remember the day I visited the Ashram, it was a trek of few kilometres but it was as if my feet had gotten rollers because I did not want to waste even a split second on the journey . The Ashram my true home was here, just here, but my feet did not stop yet. I kept running till I could see Swamiji’s kutia far away in the distance. I stopped here and did my pranams and burst out in tears as if a suckling infant who is separated from the mother just found respite at the sight of the mothers vision and cries out loud saying where were you? where have you been?, why did you leave me?

Tears of sigh or of relief or the separation that I had been bearing so far kept on rolling down my eyes for the next one hour or so until He Himself walked by. As Swamiji looked my way with His compassionate eyes I felt Divinity fill my being and poured through my eyes.

My faculty for expressing the beauty of the heavenly abode of Swamiji is only limited and the magnanimity and purity of the ashram is beyond words . It can only be experienced with Divine Grace, Grace of Swamiji.

Now, as I step back in the bustling world of the cities it seems like only my body left the Ashram, my soul resides by the lotus feet of Swamiji forever and ever .

(An experience shared by a devotee.)