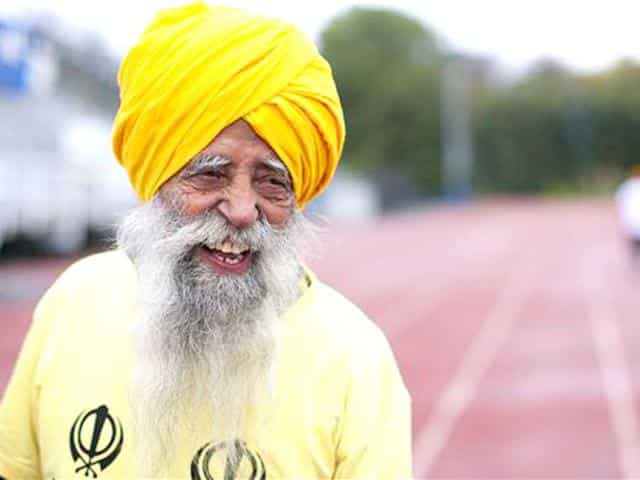 The oldest marathoner in the world with an indefatigable spirit

I offer my humble obeisance to you Rev. Sri. Sri. Om Swamiji🙏🕉

There is a saying, that life will never ever ceases to amaze you. And for me my life truly has always amazed me in innumerable ways and I shall always remain grateful to all that has been bestowed on me🙏

My years in London:
I was working as an admin at the Sikh Community Center Leyton London in 2004, where I happened to serve the community people comprising of youngsters and elderly  for a couple of years. The job was as a team catering to events for youngsters and many a times escorting the elderly people for different outings, to meeting different community circles, which was quite a learning for me . The head of the Center was a gracious lady who was like an elder sister to me and was very caring and loving too. It’s sheer Grace that I always have met wonderful and compassionate people in my life all through. I think I have had so many chapters of my journey, which I am unfurling one after the other since the time I started writing on os.me. Ever thankful to my Resp .Sri. Om Swamji for this serene platform and to the my Os family here for being so supportive 🙏I remain in gratitude.

Meeting Fauja Singh Ji was such a privilege  :

Remembering that big day when with the Head of the Community Center and many of us getting busy working and arranging the whole office hall space to welcome Fauja Singh Ji. It was a big thing and an honor to have him as a distinguished guest amongst us . He was around 90 years of age at that point in time , and for me it was something unbelievable that a person of his age could be a marathon runner. I was like many others at the center eager to meet  such a spirited person. The whole idea was also to know what inspired  him to keep going on even at this grand age.

The meeting happened and as Fauja Singh entered one look at him you could feel and see so much of calmness on the face and tremendous confidence in his persona with which he carried himself. Though some youngsters offered their hand  to help him walk inside, he politely smiled and refused to take help.

There was an amused twinkle in his eyes ,  his face had a filigree of wrinkles with  an unruly silver beard that flowed down his neck, he kept smiling and communicating in an exceptional ease with whole group of youngsters and mature alike all through. He shared  tips of his routine with the aspiring youngsters  and one could sense the atmosphere  become completely fun filled .

According to him “The Secret to a long and healthy life is to be stress-free. Be grateful for everything you have, stay away from people who are negative stay smiling and keep running.”

He was with us the community team for good 3-4 hours and we all got to learn so much from all the experiences he shared with us. Grateful for that time. Though even after that we met him during his marathons held in London in 2004.

Sharing bit of his story though much has been written about his inspiring journey on wiki and a recent book by Simran Jeet Singh too.

For the first five years of his life, Fauja couldn’t walk, and despite being told he never would, he didn’t give up. Just after his fifth birthday, after years of hard work, he was finally able to walk on his own.

When he grew up, he got married and had kids. Many years later, after his wife had passed away, Fauja moved to England, where his children lived. It was there, at the age of 81, that he saw a marathon broadcast on television and decided to try it himself. He worked for years to get strong as a runner, and at 89, after hiring a coach, he became one of the oldest finishers of the London Marathon.

A few years later, at the age of 93, Fauja decided to race the New York City marathon .  “Seven years later, at 100 years old, he raced in Toronto, inspiring Singh and countless other runners — Sikh and non-Sikh alike — around the world.

Though there is much more to his records which is beyond imagination.

Ex professional runner Harmander Singh and his trainer says that health tests showed that Singh “has the bones of a 35-year-old”. And yet, Singh claims never to drink milk

He has always been a frugal eater. He turned vegetarian some 30 years ago, and he believed it has helped me in many ways.He has one roti and some dal for lunch, and the same for dinner, more or less every day.He has a lot of curd, soondh (dry ginger) and lentils.

When he wakes up each morning and takes his first step, he can figure out whether what he had the night before  worked for him or not. He listens to his body, and implements what it tells him unlike a lot of us.

Sharing a video of his journey.

Fauja Singh Ji did eventually retire, but not until he was 104. Now 111 years of age, he still lives in the U.K.

He says, he would love to serve the Universe through his running till the last breath and the secret reflects in his noble thoughts and discipline:

“There are two noble things in life: one to do charity and other to look after your body,”

A grand Salute to this noble and inspiring Soul. Are we really meant to give up in life? Not at any cost:)

Few words to a never ever giving up Spirit by Kim Brandon :

Although you may change

Help me to dream.

I know my reality

May send you upstream

But you always come back to me

You help me maintain,

A Sense of wonder

A faith in possiblity

A fence to jump off

And lay wrapped in defeat

You say, “you are resilient”

get back on your feet”
—

The deep quest of speaking to the Spirits of my Parents only lead me within. A Self taught Artist, Reiki Teacher, PLR Therapist, Sound Healer, Rebirther, Tarot Reader and last but not least, taking little passionate steps in Writing and Photography🍃Life continues to teach. Hari Om🙏🕉


Login with Email
No Account? Create One
Self Control – A Personal Realisation
Thank You for Our Ancestors