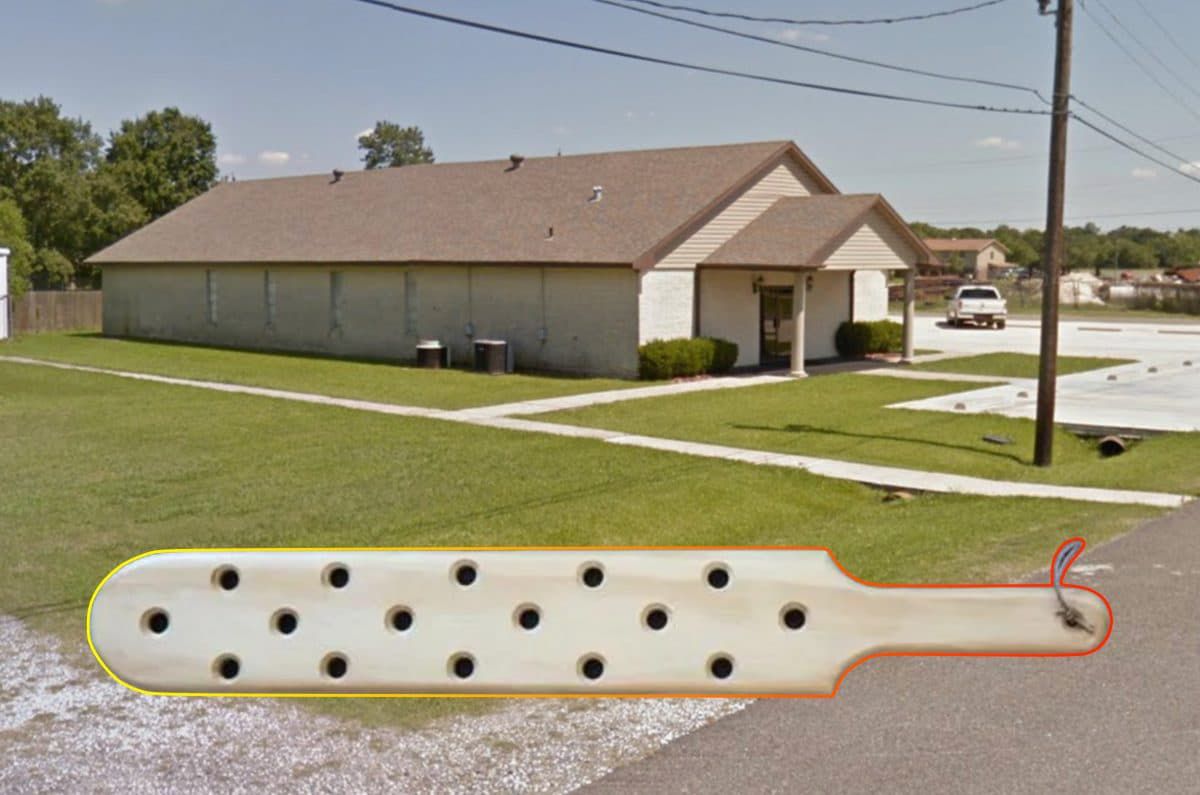 Most of my school (indoctrination) years were spent at Grace Bible Baptist School in my hometown of Sulphur, Louisiana. At the height of its glory, they had a little over three hundred students. In 1979, when I was nine years old, I won the highest award the school offered – the “Christian Character” award, which means that I acted more like materialistic-Jesus than any other student. What a mind trip!

Every morning we went into the chapel and sang “Victory in Jesus!” and every sermon made us think we were at war. “With whom?” you ask – with “Satan” (heavy Dana Carvey Church lady voice), of course, as well as anyone on his side (filthy sinners). You know what God does to people who disagree with his rules, right? Genocide. The Bible is full of it.

The teaching program was called “Accelerated Christian Education.” This link has detail on the curriculum that was used for our indoctrination – https://bit.ly/3rVQSxy.

Here’s a couple of juicy snippets –

“Seeing “God’s point of view” extends to politics, where students are taught that God’s views are right-wing, and left-wing ideas are therefore evil and godless. Students are taught as fact that government healthcare and benefits are not God’s will: “God’s plan is for these needs to be met first by family members, and then by local churches, but not by government programs.”

“Of course, ACE is relentlessly Creationist. Their scope and sequence mentions Creationism multiple times, and Creationist “evidence” is included in virtually every PACE. Here’s their science curriculum overview for PACEs 85-96 (intended for year 9 level students): “These earth science PACEs introduce specific areas of study such as astronomy, volcanology, topography, oceanography, meteorology, and mineralogy with proofs of the Creation. Students learn about the perfection of God’s design for the universe.” Evolution is constantly ridiculed as “impossible” and a “sinking ship.”

We all had to wear these red, white, and blue uniforms along with these awful “God and country” ties. All the teachers couldn’t wear makeup and had to wear their hair up in buns. Only certain blouses and mostly denim skirts were allowed. No women in pants – heaven forbid!

The pastor used to wear his hair in what I, as a child, described as a “porch.” In reality, it was sort of a highly-sprayed comb-over. But I loved it. I would ask my mother to “do my hair like his.”

My favorite teacher was the PE teacher, “Brother Ben.” I was the most obese child in my world. He was an ex-military drill sergeant with a flat top a one-size-too-small shirt. When I first got there, he hated me and made fun of me in front of the other kids. But then, one day, he nearly ran me to death. Out in the hot sun, he kept pushing me and pushing me until I collapsed. After that day, he was very kind.

He would say things to me like, “You are one of the most intelligent children I’ve ever met” or “You are so smart, you could memorize the entire Bible if you wanted to.” Meanwhile, at home, my father took every opportunity he could to insult and demean me. As a direct result of Brother Ben’s encouragement, I would go on to memorize thousands of scripture verses (not a negative thing).

They had a “group-guilty” policy at the school, meaning that if a couple of us got caught doing something, they would punish our entire grade (of boys) by beating us with a paddle in the church sanctuary. They would line us up on the pews, then one-by-one, call us up on stage, and spank us in front of the other kids.

The paddle was called “The Corporal” – so original – was about two feet long in my 10-year-old mind, with holes in it. The older kids got two-handed licks from the teachers and younger kids, a one-hand swing. Sometimes five licks each – sometimes ten. I have such fond, warm memories of Jesus’ love flowing through the teachers at this time in my life (heavy sarcasm). Actually, it was seriously traumatizing and de-moralizing. They told us it was “loving and that it hurt them more,” as I’m sure some other idiot suggested to them. I was getting spanked with a belt at home also – more normalizing of violence.

What does a sane person call this? Christian-fascism? Militant religious indoctrination? Insane-evangelicalism? It’s only by Divine grace I escaped. Otherwise, it would have been “Hail Trump!”

The sickest and most damaging teaching that modern Christianity offers is that God somehow condones (or has ever condoned) violence. To a neutral observer, the Old Testament is the story of a war-mongering group of people who committed many genocides. Then, as a result of their horrific actions (karma), they lost everything and got enslaved over and over again. Nations and tribes reap what they sow just like people do.

It doesn’t take much research these days to figure out that the Bible was a document assembled by a group of political appointees. It’s about the same thing as having today’s politicians tell you what you should and should not believe about God. Imagine if they could write fossil-fuel protection into the scriptures? Deforestation? What if white people could kill off the rest of the indigenous people and get Jesus to authorize it?!?

Crusades killed millions and millions of innocent people. Inquisition ditto. How many very peaceful pagans have gotten slaughtered? No telling how many have been harmed by the “Christian” perspective on LGBT folks and abortion in modern times. They used to preach slavery was OK and quote scripture to back it up!

God has never condoned or authorized any war or violence toward any person – or slavery. Man has created one-hundred-percent of inhumanity. Ahimsa is the principle of non-violence that runs through all the world’s ancient religions as compared to the brutal, war-mongering, crusade-and-inquisition control system called “Christianity.”

If it’s violent, it isn’t Divine. God never suggested it was best that people beat their kids – some ignorant humans thousands of years ago did. The cross represents a solution by murder and misses the point Jesus was trying to make – Satan is materialism. They’ll kill you for the cash – then and now.

Jesus talked more about money than any other subject and was butchered because He threatened to tear down the franchise that said you needed to sacrifice animals or your soul would suffer. Jesus teaches “I Am” – you are God. You were born complete. You need nothing external. The reality you experience is the reality you are creating. No church buildings, or sacrifices, or pastors to spoon-feed you the scriptures like babies are necessary.

When Jesus threatened the entire establishment this way, they tried to do away with Him. When His following kept growing, the authorities appropriated the story and built a set of rules around it to gain back control. Recall how the Romans were feeding Christians to the lions historically just before making it the state religion?

No doubt that the religious right everywhere, but especially in the US, is highly responsible for the policies that are killing the planet. Money is their God! If you love Jesus, you love your neighbor as yourself, and your politics match. US policy backed up by Christian non-sense is to control your neighbor to enrich yourself. Recall the karma of the war-loving tribe of Old Testament fame? Violence always breeds more violence.

If it’s violent, it isn’t Divine. If you wouldn’t want it done to you, that isn’t Divinity either. We need to stop teaching humans that God in any way condones war and violence if we have a prayer of surviving as a species.

You Are What You Thought…..
Beloved’s Beloved-4