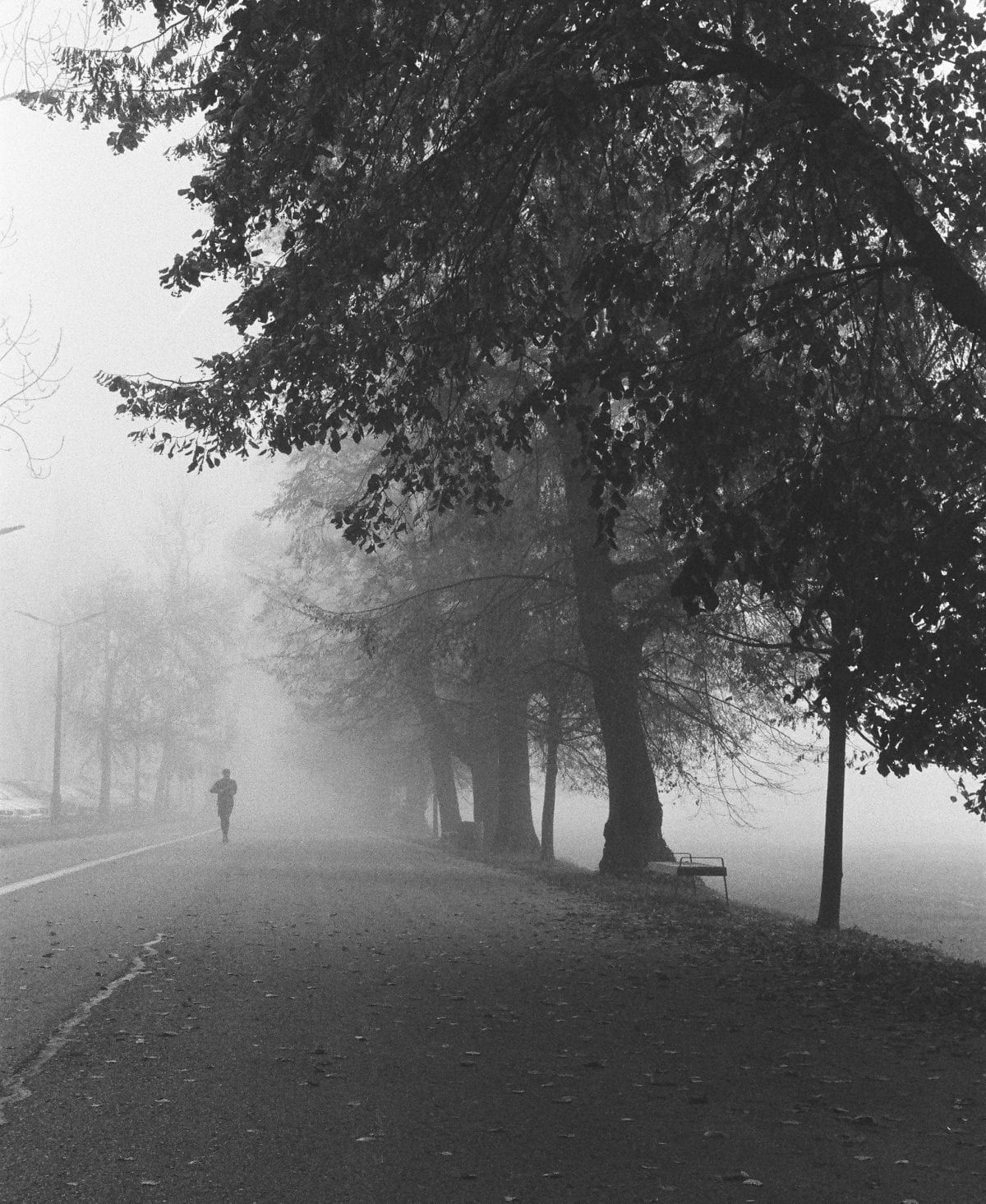 Live your own truth

A small suburban town was being embraced by a translucent fog of an early November morning. It spilt into every little street and lane, wafting like a fine powdery mist carrying dreams that everyone saw but easily forgot. Only the little koels, perched atop the Ashoka trees, softly cooed the arrival of dawn. Stray beams of light teased and danced their way through bright clusters of orange and red blossoms, like little elves in golden gossamer threads.

A quaint park, central to the town, was slowly buzzing with quick paced footsteps of some elderly folk on their walk. At about five minutes to six, a diminutive juicewala cycled his way to its gates and was in the process of setting up his pop-up-anywhere shop, right under the street light that marked the entrance to the park. He had wiped his forehead with a gamcha and was tying it across his head. A big white rexine bag laid down nearby, carried his assorted wares in tin cans along with a dusty blue foldable plastic table to display them. There was gourd and bitter-gourd, lemon, ginger, carrot and many other kind of freshly juiced concoctions to suit a conceived or preconceived notion of the walking folk.

From the corner of his eye, he noticed a lean figure of medium stature steadily making way towards him and a smile began to form on his face.

“Aare, Raaju, today you are early! What new thing you got?” Bhaskar was the perennially curiosity stricken of the three friends who would regularly meet for early morning walks and talks. He was also the local quiz master-forever on the hunt for new bits of information to bamboozle participants at the annual competition held before the Christmas holidays.

“Morning Hain Sirji! today I have eessprout, very healthy, my wife said! I can add namak and nimbu and your morning walk will be worth it!”

“Haan, Bhaiya! Shall I get for you all after 30 minutes?”

“No! No! Nothing today, I was asking just like that only.”

“Kyun Bhaiya? Have some karela at least, very good for you!”

“Aare, today Badri is Budday Boy, no ! We all are celebrating with cake, chocolate cake, see!”

Bhaskar was most pleased with any excuse to not gulp down that vile green thing! The 71-year-old scrunched his nose and grinned impishly as he made his way inside the park, dangling the Monginis polythene bag at Raaju.

In a matter of minutes, a pair of hurried footsteps were also making their way. Raaju grinned and quickly pointed them towards the gate.

Swami usually the first of the three to wake up, was always the last to arrive. The thing was, he had made a promise to his wife of 50 years, that the morning tea would be made for her, come what may. And this promise was rarely broken.

However, keeping the promise involved some dedicated time, the leaves were boiled 7 mins extra along with an inch of crushed ginger and two heap fulls of sugar to bring out that ‘kadak’ taste! And sometimes, depending on his prediction of the wife’s mood,  a ‘secret’ ingredient would get added — which could be clove or some dark chocolate powder or cinnamon or fennel or something totally random — with a little note left on the kitchen top, asking her to guess it by the time he was back!

But all of this simply meant that Bhaskar, would leave for the park in a huff. He had zero tolerance for the tardiness of his next door neighbour— 5 minutes was 5 minutes — no extra time could be afforded!

It was a strange sight in those early hours for the sleepy watchmen of Nivaant Housing Society. Two elderly gentlemen, neighbours, best friends even, one walking a few steps behind the other, muttering some version of sorry whilst the other barely payed heed.

Meanwhile, waiting on a quaint stone park bench was Badri, the eldest of the three friends. Tan and lanky with snow white hair, he had a quiet disposition about him tinged with a mild case of pessimism. Today he turned 74 and would be the only one of the three to have completed walking 5 rounds of the park track. A few seats ahead another elderly regular had begun his flute trill. Today he was playing Raga Sindhu Bhairavi and Badri was lost in its melodic motion.

He pulled his sweater closer in an effort to preserve warmth, while his eyes gazed into the grey translucence of the morning moment — not dark, not light but everything in between. Perhaps a little like him. Not at the end but also nowhere near the beginning —in between.

The pervading fog seemed unusually thick and at first instance, he was unable to decipher who or what was making way towards him. He squinted his eyes to perceive better, but the best he could gauge was two shadowy figures with something swaying from one of their hands…

“Bhaskar? Swami? Is that you?” He called out.

You walk mighty fast for an old man! We could barely catch up!

As the voice became clear so did the shadows. Two dapper boys in sweatsuits stood before him. They were slim but of athletic built and exuded a radiance that could not be alluded to exercise, not a drop of sweat marked their foreheads. It all seemed strange to Badri.

“It must be the karela juice? Or all the sun salutations you do when you get home? No? Please tell us, uncle?” The other voice now spoke up.

Both had an innocent but mischievous charm about them but it was their arresting eyes that caught Badri’s attention — two pairs of stunning black diamonds seemed to be gazing at him, into him?

“Who are you two? And why are you following me? Also, I’ve never seen you two hereabouts!”

“We are The Doots, but you can call us Jai-Veeru. No need for formality! Daddy also calls us that.”

“Doots? Do I know your daddy?”

“Well, everybody does… Eventually! You will too… but perhaps not today.”

“Then why are you stalking me?” Badri was getting agitated and wanted to make a run from it, but those eyes had him transfixed.

Jai explained, “We were in the neighbourhood, picking up someone. But remembered, that its your birthday, and wanted to wish you… and… remind you…”

He was holding on to what seemed like a white polythene bag, gently swinging it like a school boy carrying his lunch.

“Picking up some one? Remind me? But of what? Wait a minute! How did you know its my birthday? And what’s in that bag??”

Veeru chimed in, “You have this peculiar habit of collecting journals. We found it most fascinating! No matter where you have traveled, here, there…across the globe, you pick up a journal or a diary from a well-known stationery shop, smell and feel its pages as you examine it. Then walk up to an attendant or the cashier and inquire about their ‘inkproof-ness’. Finally, buying the one that most appeals to you. But the funny thing is, you come home and store it away in one of your drawers! I think we counted 30–35 lying around…”

“But…But…How do you know all this?”

“Why don’t you fill them, uncle? What are you waiting for? Tic-Toc ,Tic-Toc! Time is ticking in case you didn’t notice. Jai pointed to an imaginary watch on his hands.”

“I…I…I have nothing to write, nothing to say… nothing… nothing,” Badri replied in a half-choked whisper.

“But, uncle… You brought those journals with so much hope! Surely, those blank pages stirred something? You had an innate desire or better still an innate ability to fill them so she presented herself to you!

“Hope is a bit of a trickster, just so you know-easy to come by but not so easy to yield. What’s the point otherwise? Will you let her strike an inspiration or an illusion in you?

“Perhaps, you would like to start with that gentleman playing the flute? He too accosted hope a few years ago… And chose to be inspired! He is delightful… Maybe, on your way out tell him that! He might not be around next week.”

Veeru nodded, “And take that trip, you have been talking about for years with Bhaskar and Swami. Then come home and write about it! Fill those journals! Live your own truth, uncle! Plus, Swami’s wife will get a relief from the tea, she actually loves a good kaapi once in while!”

The voices bust out laughing. But Badri closed his eyes, too bewildered and scared. He didn’t want to open them and he clung even tighter to his sweater.

Badri snapped out, “Huh! You two! What about th…”

Bhaskar remarked, “What about what? Don’t be funny! We were not that late today! Just 5 minutes! Besides it’s all Swami’s fault…”

“Aaare, let’s wish him first, then bicker. Besides, you have absolutely no patience!” Swami cut in.

“Happy Birthday, Badri! We have cake and a red rose for you!”

Badri finally found his bearing and smiled, “Thank you! Thank You Boys! Say, I was thinking… How about finally taking that trip? Kasauli?”

Bhaskar’s eyes immediately twinkled at the idea: “Bolo na! When?”

“I am game anytime!” Bhaskar remarked pointedly looking at Swami.

Not to be outdone, Swami snapped back, “I am also ready, nothing to do, only Wife’s …”

“Don’t worry!” Badri chuckled, winking at Bhaskar, “She will be super-happy.”

“I swear!” Bhaskar rolled his eyes “Poor lady…all that tea!!”

PS: A not-so-sneaky dedication to our beloved one ❤️ All Glories to Him! Our Divine Master 🙏🏼